Chris L. Terry on “Keeping the Engine Warm” After Having a Kid

Chris L. Terry is the guest. His new novel, Black Card, is available from Catapult Press. This is Terry’s second time on the podcast. He first appeared in Episode 217 on October 16, 2013.

Terry was born in 1979 to an African-American father and an Irish-American mother. He has an BA in English from Virginia Commonwealth University and a creative writing MFA from Columbia College Chicago. His debut novel, Zero Fade, was named a Best Book of the Year by Slate and Kirkus Reviews. He lives in Los Angeles with his family.

Brad Listi: You had a kid, which will throw a wrench into any writing routine. Did you have trouble? Did you go through a long period where you didn’t work because you were focused on child-care stuff?

Chris L. Terry: I did the opposite, where I forced myself to work when it might not have been productive. Right before my son was born, I managed to complete a sloppy first draft of this book, which was summer 2014. Then I spent the next year working on another draft that refined the story a little bit, but considering the amount of energy, time, and stress it might have been better to be easier on myself, you know.

Listi: Right, you have this big change in your life coming up and you don’t want to let go of the writing. You hang on tight. I get that. You want to muscle through.

Terry: I’m super regimented. The kid was coming, which was an unknown, and I’m thinking that I’m never going to run, sleep, or write again. Obviously, none of those are true, and I found time to do those things.

Listi: I say this to anyone who’s been on the show, or anyone in general, who’s just had a kid: Aimee Bender, who had young twins, was writing her next book in ten-minute increments. She had ten-minute sessions where she would force herself to get words down, and bit by bit she did it.

Terry: There is be something to be said about what I call “keeping the engine warm,” where you can dive back in when you have those ten or fifteen minutes. I know some people that can work that way.

Listi: I feel like I need a moment before writing, look at Twitter or flip through a book.

Terry: Before I was a parent, when I had all day to write I would really only bang out about ninety minutes of work. 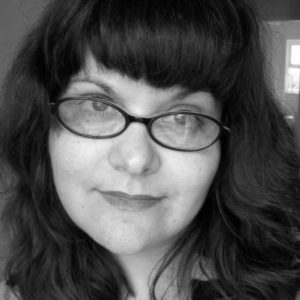 On this week's episode of Reading Women, Kendra Winchester and Autumn Privett talk with Tina Kover, the translator of Disoriental...
© LitHub
Back to top