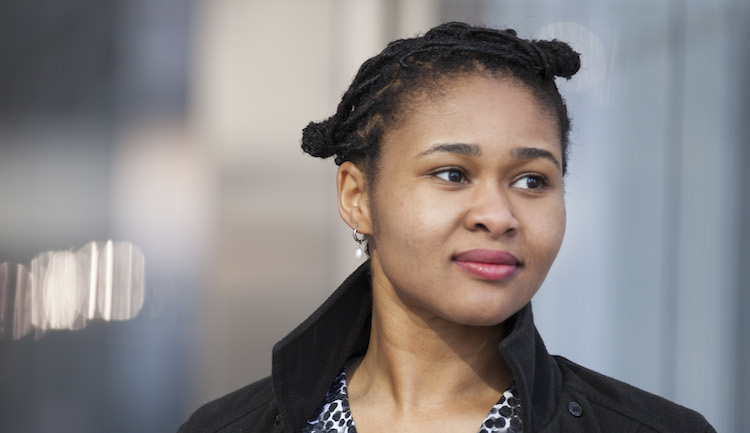 Chinelo Okparanta on Faith, War and Being Gay in Nigeria

Her Debut Novel, Under the Udala Trees, Launches at Housing Works

Late in Under the Udala Trees, Ijeoma awakens from an accidental sleep to find that her infant daughter is not where she left her. In a hazy realization, Ijeoma catches a glimpse of her daughter across the room at their sewing machine, holding a pincushion, brightly colored, its shiny pins and mesmerizing threads. The domestic scene is abruptly dark, shrouded in the sudden appearance of evening. Ijeoma watches from the other side of the room as the baby suddenly and purposefully puts the cushion and its threatening bed of pins into her mouth, curious and calm. Ijeoma narrates, “she looked wide-eyed at me, green and red and black threads dangling from her mouth. And for some unknown reason, I could not get my feet to move.” Ijeoma’s husband, a relentlessly hopeful man, distressed by and refusing of his wife’s unacknowledged homosexuality, appears then, as if from nowhere. For a few moments, the two parents are still, watching their daughter and the object in her mouth.

It is with this delicateness and darkness that Chinelo Okparanta’s debut novel unfolds: it is a war story and a love story. With language that Taiye Selasi calls “boldly unadorned,” Under the Udala Trees is written in a folkloric cadence, a music that echoes the many Nigerian war stories and songs that are woven into the book. When I was in a graduate student in the Sarah Lawrence College MFA program, Okparanta’s story “America” published that year in Granta, made the rounds amongst my classmates. This story, from a writer we had not heard of, was subtle, steady, possessing an exactness of prose that seemed to celebrate the sentence as much as it did the lives of the Nigerian women it portrayed. We revered its elegance and its heart.

This admiration seems to follow Okparanta wherever she goes. Since that story, one of her first publications, now just three years ago, Okparanta was also named a 2012 Granta New Voice, and her collection, Happiness, Like Water was published in 2013 to great acclaim, earning the Lambda Literary Award for Lesbian Fiction, and was a finalist for the New York Public Library Young Lions Fiction Award and the Rolex Mentor and Protege Arts Initiative. In advance of Under the Udala Trees’s publication this week, I talked to Ms. Okparanta about the novel.

Under the Udala Trees begins in Ijeoma’s childhood, during the violent center of the Nigeria-Biafra Civil War in the late 1960s. The war makes a devastating and cinematic backdrop to this story of a gay Nigerian woman and the events of her life: “So, the story begins even before the story, on June 23, 1968, Ubosi chi ji ehihe jie: the day the night fell in the afternoon, as the saying goes.”

In these opening pages, Ijeoma’s father is killed after refusing to take shelter in a raid. His death leaves Ijeoma and her mother alone, independent, isolated, no men in their life. This is the essential seed to what occurs in the following decades. Under the Udala Trees is a novel as much about queer experience as it is about origin and incidence, a story of war, of purpose and fate and accident. Ijeoma tells us:

Under the Udala Trees is much more a book of war than Okparanta’s first collection. Clearly in the tradition of Chinua Achebe, Wole Soyinka, Edwidge Danticat, and others whom Okparanta calls in her acknowledgements “my predecessors, my guiding lights,” Under the Udala Trees does something further. Here we have a narrative of war, of LGBTQ Nigerians, and of Nigerians of faith. Ijeoma’s faith, her war-torn childhood, and her sexuality are not politized items, but deeply felt.

I asked Okparanta first about the opening of the novel, which aligns Ijeoma’s self-discovery with civil violence. She reflected: “What goes on in a nation and what happens in the domestic sphere are often intricately connected. When a country is at war, the citizens feel it in their homes…The world is interconnected in this way.” The homes of this novel—Ijeoma’s and her mother’s childhood homes, her schoolgirl dormitory, the concrete slab she bathes on with her adolescent lover Amina—are sources of intimacy, of vitality, sharply illuminated physical spaces where love, war, and zealotry pass over in equal measure. The breaking apart and coming together for Ijeoma occurs as the nation does. Ijeoma wonders aloud if the tragedy of her father’s death, the atrocity of dead bodies along their rural street, are not a necessary or inevitable revolution. Okparanta explains: “[At the beginning of the novel] Both the girl and the country are children. She embarks on her journey of self-discovery just as the nation also does. It is a journey filled with many missteps and lots of pain. In this way, the life of the girl essentially becomes synonymous with the life of the country.”

But the power of Under the Udala Trees, a book that is both rich in history and magnificently felt, comes not from its panoramic displays of violence and terror, but from its nuanced refusals of grandiosity, its steady and elegant churn.

Sometimes a decision comes upon us that way—in a series of dreams, in a series of small epiphanies. Imagine that there is a murmur of a sound, something from somewhere in the distance. It is not quite noticeable, but the minutes go by and the sound gets stronger: quonk, quonk, quonk, and finally you look up and see a skein, a flock of geese, a perfect V up above in the sky.

As Nigeria presents a fractured sense of home for Ijeoma, so does her mother Adaora. Motherhood and heritage demand a great deal of Ijeoma, her mother’s urgent hopes for her are an insistent refrain. Again and again she warns Ijeoma: “a woman without a man is hardly a woman at all.” Okparanta says, “Ijeoma’s mother is coming from the space of many traditional Nigerian women; this is what a number of traditional Nigerian women do: they hold fast to their convictions.” And despite the zealotry of Adaora’s shame over her daughter’s sexuality, “Adaora is her own counter-argument: proof that a woman without a man might even be stronger and more capable and that much more a woman than a woman with a man. Could she have known her own strength if there had always been a man by her side? Probably not. She might never have had the opportunity to know.”

In Happiness, Like Water, the first half of the collection is set in Nigeria and the second in America. But the West is an unspoken entity in Under the Udala Trees, which is as much of Nigeria as it is of Ijeoma. Okparanta immigrated with her family to the United States when she was ten, and was educated here at Pennsylvania State University and the University of Iowa. America is a lingering idea in the novel, perhaps, but there is never a moment when Ijeoma desires to live elsewhere.

Okparanta elaborates: “Especially on the topic of homosexuality, with all due respect to the West, I did not want to bring the West into it. The novel tries hard to be self-reflective/self-focused where country is concerned. That is, there is minimal reference to the West in it, and certainly nothing explicitly said about Western ideas of homosexuality. I think that we Nigerians really have to try to have this conversation on homosexuality without bringing the West into it, without such accusations as ‘You’re just being brainwashed by the West’ or ‘You’re adopting Western ideologies’ or ‘Homosexuality is a Western disease’ or ‘You’re reducing yourself to the status of servant of the West’ or ‘You’re only trying to impress the West’ or ‘You’re just trying to be whiter than the Whites’ or ‘You are forgetting your roots,’ all of which accusations I’ve endured with my LGBTQ short stories, and which I’m sure I will not be able to avoid when this novel comes out, but I’ll try anyway.”

Much of the second half of the novel is devoted to Ijeoma’s troubling eventual marriage, to her childhood friend Chibundu. While Ijeoma’s distaste for him is not his fault, as their relationship deteriorates he is undeniably cruel to her. Their impossible happiness is devastating to behold, their isolation from one another, their brittle sexual encounters, and increasingly sinister resentment of each other. And yet, Okparanta is patently empathetic; she explained that Chibundu’s blind eye to Ijeoma’s “abominations”, much like her mother’s, is not shame or stupidity, but hope. Okparanta is firm on his insistence on staying with Ijeoma: “How can we possibly blame anyone for hoping?” she explained, “I think this is exactly what love does—it gives us hope.”

In this way, in acknowledgement of Nigeria’s violence and of the profound anti-gay convictions, Under the Udala Trees is unrelentingly a novel of hope. This is seen most dramatically in Ijeoma’s faith. Okparanta reflects, “I grew up Christian, and I don’t remember a time when I did not know the Bible… I was even a bit obsessive with it: trying always to do the right thing and always beating myself up when I failed.” But in the same way that Under the Udala Trees hopes for an improved Nigeria, and not an escape, she writes, “I wanted a novel that explored possibilities, a novel that spoke against the black and white interpretations of the Bible.” The novel holds this hope for a better interpretation and a better Nigeria. Ijeoma dreams of towns where they can lie freely, but the descriptions of these imagined locations are not afar but familiar, “All of them are here in Nigeria. You see, this place will be all of Nigeria.”

And although the book ends with words of peace, one must only turn a page to the Author’s Note to read that “On January 7, 2014, Nigeria’s president Goodluck Jonathan, signed into law a bill criminalizing same-sex relationships and the support of such relationships, making these offenses punishable by up to fourteen years in prison.” In Okparanta’s careful prose, it continues “In the northern states, the punishment is death by stoning.”

What is most surprising in this book, which, by description, is a story of LGBTQ rights and experience against the backdrop of Civil War, is that it is not a work of agitation. But this may be Okparanta’s sly shattering, a hopeful fracturing that allows for change. As she says, “I don’t write to tear apart or to denigrate or to condescend. I write to improve. I can’t worry too much about what negativity people will bring into the work. Once I’ve written it, it’s like a gift. It becomes my gift to the world, and they will do with it as they please.”

Chinelo Okparanta’s Under the Udala Trees launches at Housing Works Bookstore Cafe on Wednesday, September 23, and will featuring readings by the author along with Taiye Selasi and Natalie Diaz, and musical appearance Reiko and Nani Fueting.

Molly Rose Quinn is a poet living in Brooklyn and the Director of Public Programming at Housing Works Bookstore Cafe. 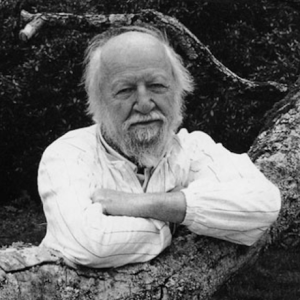 The sycophantic portrait of an intellectual bully: on James Boswell’s Life of Johnson, the world’s first and greatest...
© LitHub
Back to top