Chimamanda Ngozi Adichie on How to Write and How to Read

"When it's difficult, what keeps me going is the possibility of joy."

Believe it or not, Chimamanda Ngozi Adichie—acclaimed novelist, famous feminist, certified genius—turns 40 today. In recent years, Adichie has become an international authority on feminism, and her TEDx talk “We should all be feminists” and the resulting book version have become so iconic that the sloganized title is gracing t-shirts everywhere these days. (Some of those t-shirts are made by Dior, and the whole designer feminist t-shirt thing is a complex issue that I won’t get into here, but remember that buying things does not actually make you more feminist.)

But while I am grateful for Adichie’s perspectives on feminism and her compelling arguments that we should raise boys and girls the same, and though I love and have taught We Should All Be Feminists, I sometimes get the feeling that in all the commotion people forget the fact that Adichie is, before all else, a fantastic writer of fiction. This isn’t so unusual for writers of color or anyone else who can be asked questions about identity rather than craft (see here a move towards a remedy: writers of color discussing craft), but at the very least, I’d like her to be recognized as much for her contributions to contemporary literature as for her contributions to contemporary feminist discourse. So today, for her birthday, I spent some time reading (and listening to) Chimamanda Ngozi Adichie on her writing process, what she values in literature, and her advice for aspiring writers. Highlights below.

On reading to learn:

“[I tell aspiring writers in my workshops] to read and read and read. I’m a believer in reading, to see the wide range of what’s been written. I’m also a believer in reading what you dislike at least once, just to know. I often say to my students, “I’m going to have you read something I don’t like.” I don’t like cold fiction. I don’t like fiction that is an experiment. I find that often it’s the boys in the class who love the fiction I don’t like. I say to them, “I’ll tell you why I don’t like it. And, then, if you like it, I want you to tell me why.” Most of all I believe in reading for what you can learn in terms of not just craft and technique but worldview. It’s important to think about sentences and how one develops character and all of that, but also to think about what the story is as a big thing. Most of all, we have fun in the workshops. For me, it’s important that we find reasons to laugh. And we mostly do.”  –from an interview in Image

“Read, read, read. I’m not sure that one can be a good writer without being a good reader. If you’re going to build a desk it’s very good to see what other carpenters have done.”  –from an interview with the Stylist Book Club

On writing from life:

“I have many writer friends who get offended when they’re asked about the story behind the story. I don’t. Imagination doesn’t fall from the sky; you have to work with something. My fiction borrows from my life, but even more so from the lives of other people. And because I write realistic fiction, it doesn’t fall from the sky. I don’t feel threatened when I’m asked that.”  –from an interview in Salon

“Sometimes a character just forms in my head; other times a character is based on somebody real (although the character often ends up being quite different from the “real” person). Ifemelu is a more interesting version of me. Both Ifemelu and Obinze are me, really. . . . I think I have Ifemelu’s questioning nature, Obinze’s longing. Like them, I’m always looking to learn. A bit of a romantic, but I hide it well.”  –from an interview with Parul Sehgal at Tin House

On why the love story in Americanah is not a “descent”:

But yeah, I love the love story, I wanted to do that very much. But it’s a love story that’s very much rooted in reality. It’s the kind of love story where your inability to get a visa gets in the way of love. I loved the ending, for example, which I hoped would annoy some people. It’s always a good thing to annoy some people. But here’s the thing: the ending is me thinking, “You know what? I want to have this lush, ridiculous thing happen, and it’s going to happen!”  –from an interview in Salon

On (not) writing to prove something:

“I don’t start out writing to challenge stereotypes. I think that can be as dangerous as starting out to “prove” stereotypes. And I say “dangerous” because fiction that starts off that way often ends up being contrived, burdened by its mission. I do think that simply writing in an emotionally truthful way automatically challenges the single story because it humanizes and complicates. And my constant reminder to myself is to be truthful.”  –from an interview with Parul Sehgal at Tin House

On the difference between writing short stories and writing novels:

But I do find both forms equally frustrating when they’re not going well. When they’re going well, they’re fantastic. And I have short stories that took me forever to write. One of the stories in [That Thing Around Your Neck] took me four years—”Cell One.” I started it, and I just didn’t know what to do with it. I kept going back over the years, and it just didn’t work. Then one day it did. The idea is that the short story takes a week to write. That didn’t work for me.”  –from an interview at Bookslut

On turning research into fiction in Half of a Yellow Sun:

“I joke a lot about nearly killing myself, but it really was very intense. I think I went out of my way to read everything that I could find that was published on this period of Nigerian history. I asked tons of questions of everybody: my parents, my relatives, friends of relatives. It became really difficult to turn all of that into fiction because I had huge files of research. I found things that were so exciting, I thought, “I didn’t know the French government did that, it has to go into the book!” But then the problem was to find a way to use all of that and still make it a novel. The first draft was a disaster because it was just about how much research I had done and what I had found out. In the end the lesson was about discipline and saying to myself that it needs to be about the characters, because I realized in the first draft what was happening was the events were driving the narrative. I just thought, “No, it’s not working. It has to be the characters driving the narrative.” All those things I found out, I had to keep them in my head.

One thing I did right from the beginning was to have a structure where I start in the beginning, then move to the war when terrible things start to happen, and then to move back to the beginning. It’s important for me as well because I didn’t want to lose the humanity in my characters. I didn’t want to be immersed in this place where all I felt for them was pity or horror. It was important to go back and just remember when these people were ordinary and they didn’t have to deal with a bomber plane. All they had to deal with was “What do I have to eat?” or “Which party am I going to go to?” That sort of thing.

I didn’t really have too much trouble with the structure. The most difficult thing about that book was turning research into fiction. Turning things that were interesting to discover into believable parts of human narrative.”  –from an interview at Bookslut

“I think honest feedback is very important. But it’s also hard to find. Other writers can be useful, also they can not, because they’re doing the same thing, and sometimes they want you to become like them. So it’s wonderful if you can find a reader who’s very careful, but who’s not necessarily interested in writing. You have to make peace with the fact that there are people who will not like it and who will not get it, and that it’s part of the territory.”  –from an interview with the Stylist Book Club

“Clarity’s important to me. I forget who said that ‘Prose should be as clear as a window pane.’ I’m very much in that school, and it’s the kind of fiction I like to read. The kind of writing that I like to read is writing that is clear. I think it’s very easy to confuse something that’s badly written as something that’s somehow deep. If something is incomprehensible and the sentences are bad, we’re supposed to say, ‘Oh that’s really deep.’ It’s not the kind of fiction I like to read, so I guess maybe when I’m editing I’m thinking about that. I’m thinking that the sentences I really admire are sentences that are lucid.”  –from a conversation with Zadie Smith for the NYPL podcast

“I think it’s important to tell your story truthfully. And I think that’s a difficult thing to do, to be truly truthful, because it’s only natural to be concerned about offending people, or possible consequences. . . . Forget about likability. I think that what our society teaches young girls, and I think it’s also something that’s quite difficult for even older women, self-confessed feminists, to shrug off, is this idea that likability is an essential part of the space you occupy in the world. That you’re supposed to twist yourself into shapes to make yourself likable, that you’re supposed to kind of hold back sometimes, pull back, don’t quite say, don’t be too pushy because you have to be likable. And I say that is bullshit. . . . If you start off thinking about being likable you’re not going to tell your story honestly. Because you’re going to be so concerned with not offending. And that’s going to ruin your story.”  –from a speech at a Girls Write Now banquet

On what keeps her writing:

“I love writing; writing is what makes me happy—happiest. And so when it’s difficult, what keeps me going is the possibility of joy. When you’re writing and it’s not going well, take a break, eat chocolate. Just sort of leave it alone for a while and then go back.”  –from an interview with the Stylist Book Club 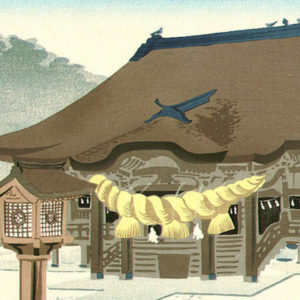 If ever I needed the presence of the gods, now is the time. I arrive at Izumo Taisha, the second-most-sacred shrine in Japan,...
© LitHub
Back to top