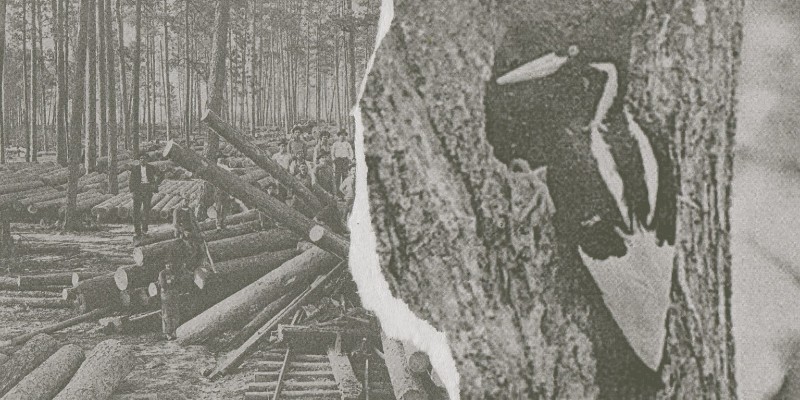 In this week’s episode, Chelsea Steinauer-Scudder explores the widespread disappearance of birds in the narratives of apocalyptic prophecy that run through our collective consciousness.

James Tanner was a graduate student at Cornell University when he was offered a three-year Audubon Research Fellowship to study the famed ivory-billed woodpecker in its native habitat. The fellowship would mean thousands of miles on the road, hundreds more trudging on foot through swamps filled with poisonous snakes, mosquitos, and wolves, and little opportunity to settle down. It also meant the chance to save a bird that, until several years ago, had been presumed extinct. Jim didn’t hesitate in saying yes.

He had been an avid birder since he was a teenager. He taught himself to mimic bird calls; he learned to sit still for hours with his back against the trunk of a tree; he trained a wounded golden eagle to hunt from his arm.

Long before he arrived at Cornell University, the ivory-billed woodpecker, Campephilus principalis, had been disappearing across the United States. Increasingly rare sightings of this vanishing species had pushed its existence into the realm of myth. The ivorybill was the largest woodpecker in North America, measuring up to twenty-one inches in length with a thirty-inch wingspan. Its bill was made of bone covered in keratin and was rooted deep in the bird’s skull, allowing it to absorb the shock of drilling into trees and giving it leverage to strip away huge pieces of bark to get at the grubs that made up its diet. For centuries, people had been particularly drawn to the ivorybill’s beauty: the regal crested head, deep red on the males, velvet black on females. The rest of the bird’s plumage was composed of layered sheens of blue-black feathers interspersed with striking patterns of white on the wings and neck.

Jim had spent the previous summer with Dr. Arthur Allen and his team from the Cornell Lab of Ornithology on an expedition to the Singer Tract, land owned by Singer Manufacturing Company—previously known as the Tensas Swamp—in Louisiana’s Mississippi River Delta. Here, the team had observed and recorded several nesting pairs of these extraordinary woodpeckers, and Jim had at last witnessed the graceful swooping flight of the bird firsthand. He had heard its distinctive nasal kent call and its characteristic double-tap on the trunks of trees. He had left Louisiana reluctantly when the expedition ended, eager for a way to return.

And now he had one. Jim’s three-year contract with the Audubon Society required him to visit every site in the United States with habitat suitable for ivorybills: the great upland pine forests and river-bottom swamps that ran from Texas to Mississippi to North Carolina. His primary mission was to learn all he could about the ecology of the species and to return home with enough data to convince both private landowners and Congress to take steps in preserving the bird’s habitat. Jim was to research and travel to every forest where locals had long reported seeing the “Pearly Bill,” the “Log-god,” the “King Woodchuck”—a great woodpecker, unlike any other bird, they would say. The ivorybill also frequently went by the moniker “Lord God Bird,” for when it swooped into view, people were known to shout, “Lord God, what a bird!”

But ivorybills were nowhere to be found along the Altamaha River in Georgia, nor in Florida’s Everglades, nor along the Suwannee River.

In his third month on the road, Jim returned at last to the Tensas River and the Singer Tract, where he observed what he believed to be seven nesting pairs of ivory-billed woodpeckers over the course of several months within the Tract’s 80,000 acres.

The following spring, he could only find two pairs of ivorybills, three lone adults, and three young birds—for a total of ten. He found just one nest that had hatched a surviving chick.

In the final year of his three-year term, Jim noted only four ivorybills within the Singer Tract, which he believed to be the last site in North America where the birds existed. It was no coincidence that this was one of the few virgin forests left intact in the American South.

“The Singer Tract was the one forest that looked and felt and smelled and sounded as it must have thousands of years before,” writes Phillip Hoose, author of The Race to Save the Lord God Bird. “There was a good chance that every single species that had ever lived in this forest was still there except for the Carolina Parakeet and the Passenger Pigeon—both extinct. Everything else—from Ivory-bills, panthers, and wolves to grubs, mites, and frogs—was still there.”

At the conclusion of his fellowship, Jim delivered a grave and urgent report to the National Audubon Society. He understood the rapid decline of the ivorybill population to be a symptom of starvation, which had reduced their ability to produce viable offspring. The bird, he wrote, relies on the existence of huge swaths of forest, up to six square miles per bird, to have enough of their primary source of food: beetle larvae, which is found especially in sweet gum and Nuttall oak trees. In order for there to be enough larvae, there must be an ongoing cycle of old trees dying a natural death.

But sweet gum and Nuttall oak were also the most desirable trees for the logging industry. Already, the lumber companies had bought and cleared thousands of acres of the South’s vast, primeval forests. Singer’s owner had recently sold six thousand acres to the Tendall Lumber Company and was receiving generous offers for the rest. The Chicago Mill Company was already logging on the western side of the Tensas River.

The ivorybill was running out of time. The year was 1939.

In short order, WWII would create the next lumber boom, Jim Tanner would be drafted into the army, and efforts to conserve even a small part of the Singer Tract would fall through. The ancient trees proved too valuable to be protected.

In 1944, Don Eckelberry, a wildlife artist, spotted an ivorybill in one of the remaining pockets of forest left standing in the Singer Tract: a lone female, calling through the trees.

His was the last universally accepted sighting of the ivory-billed woodpecker in the United States. 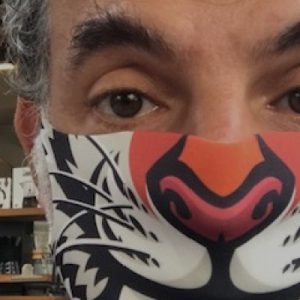