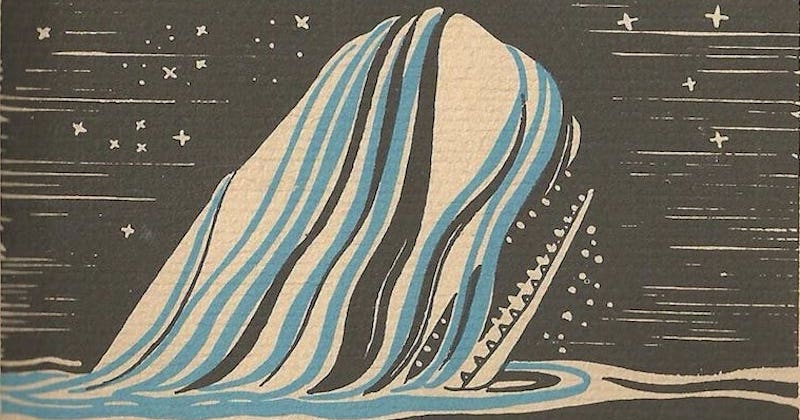 Check out the original 1851 reviews of Moby-Dick.

On the occasion of its 170th publication anniversary, here are the very first reviews of Herman Melville’s leviathan-sized opus of obsession, revenge, and meticulously detailed whaling practices. 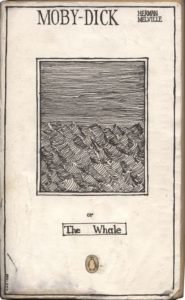 “To convey an adequate idea of a book of such various merits as that which the author of Typee and Omoo has here placed before the reading public, is impossible in the scope of a review. High philosophy, liberal feeling, abstruse metaphysics popularly phrased, soaring speculation, a style as many-coloured as the theme, yet always good, and often admirable; fertile fancy, ingenious construction, playful learning, and an unusual power of enchaining the interest, and rising to the verge of the sublime, without overpassing that narrow boundary which plunges the ambitious penman into the ridiculous; all these are possessed by Herman Melville, and exemplified in these volumes.” 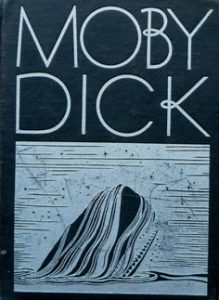 “This is an ill-compounded mixture of romance and matter-of-fact. The idea of a connected and collected story has obviously visited and abandoned its writer again and again in the course of composition. The style of his tale is in places disfigured by mad (rather than bad) English; and its catastrophe is hastily, weakly, and obscurely managed … The result is, at all events, a most provoking book,—neither so utterly extravagant as to be entirely comfortable, nor so instructively complete as to take place among documents on the subject of the Great Fish, his capabilities, his home and his capture. Our author must be henceforth numbered in the company of the incorrigibles who occasionally tantalize us with indications of genius, while they constantly summon us to endure monstrosities, carelessnesses, and other such harassing manifestations of bad taste as daring or disordered ingenuity can devise…
We have little more to say in reprobation or in recommendation of this absurd book … Mr. Melville has to thank himself only if his horrors and his heroics are flung aside by the general reader, as so much trash belonging to the worst school of Bedlam literature—since he seems not so much unable to learn as disdainful of learning the craft of an artist.” 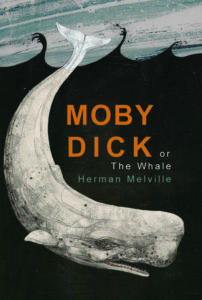 “Of all the extraordinary books from the pen of Herman Melville this is out and out the most extraordinary. Who would have looked for philosophy in whales, or for poetry in blubber. Yet few books which professedly deal in metaphysics, or claim the parentage of the muses, contain as much true philosophy and as much genuine poetry as the tale of the Pequod’s whaling expedition … To give anything like an outline of the narrative woven together from materials seemingly so uncouth, with a power of thought and force of diction suited to the huge dimensions of its subject, is wholly impossible … [Readers] must be prepared, however, to hear much on board that singularly-tenanted ship which grates upon civilized ears; some heathenish, and worse than heathenish talk is calculated to give even more serious offence. This feature of Herman Melville’s new work we cannot but deeply regret. It is due to him to say that he has steered clear of much that was objectionable in some of his former tales; and it is all the greater pity, that he should have defaced his pages by occasional thrusts against revealed religion which add nothing to the interest of his story, and cannot but shock readers accustomed to a reverent treatment of whatever is associated with sacred subjects … [T]he artist has succeeded in investing objects apparently the most unattractive with an absorbing fascination. The flashes of truth, too, which sparkle on the surface of the foaming sea of thought through which the author pulls his readers in the wake of the whale-ship,—the profound reflections uttered by the actors in the wild watery chase in their own quaint forms of thought and speech,—and the graphic representations of human nature in the startling disguises under which it appears on the deck of the Pequod,—all these things combine to raise The Whale far beyond the level of an ordinary work of fiction. It is not a mere tale of adventures, but a whole philosophy of life, that it unfolds. 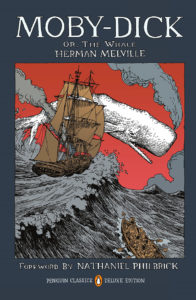 “Not only is there an immense amount of reliable information here before us; the dramatis personae … are all vivid sketches done in the author’s best style. What they do, and how they look, is brought to one’s perception with wondrous elaborateness of detail; and yet this minuteness does not spoil the broad outline of each. It is only when Mr. Melville puts words into the mouths of these living and moving beings, that his cunning fails him, and the illusion passes away … The rarely imagined character [Ahab] has been grievously spoiled, nay altogether ruined, by a vile overdaubing with a coat of book-learning and mysticism; there is no method in his madness; and we must needs pronounce the chief feature of the volume a perfect failure, and the work itself inartistic. There is nevertheless in it, as we have already hinted, abundant choice reading for those who can skip a page now and then, judiciously … Mr. Melville has crowded together in a few prefatory pages a large collection of brief and pithy extracts from authors innumerable, such as one might expect as headings for chapters. We do not like the innovation. It is having oil, mustard, vinegar, and pepper served up as a dish, in place of being scientifically administered sauce-wise.” 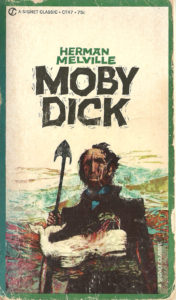 “A new work by Herman Melville, entitled Moby Dick; or, the Whale, has just been issued by Harper and Brothers, which, in point of richness and variety of incident, originality of conception, and splendor of description, surpasses any of the former productions of this highly successful author … [T]he author has contrasted a romance, a tragedy, and a natural history, not without numerous gratuitous suggestions on psychology, ethics, and theology. Beneath the whole story, the subtle, imaginative reader may perhaps find a pregnant allegory, intended to illustrate the mystery of human life. Certain it is that the rapid, pointed hints which are often thrown out, with the keenness and velocity of a harpoon, penetrate deep into the heart of things, showing that the genius of the author for moral analysis is scarcely surpassed by his wizard power of description.” 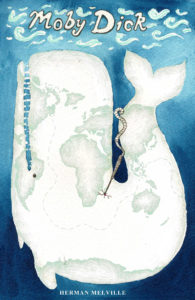 “Thrice unlucky Herman Melville! … This is an odd book, professing to be a novel; wantonly eccentric; outrageously bombastic; in places charmingly and vividly descriptive. The author has read up laboriously to make a show of cetalogical learning … Herman Melville is wise in this sort of wisdom. He uses it as stuffing to fill out his skeleton story. Bad stuffing it makes, serving only to try the patience of his readers, and to tempt them to wish both him and his whales at the bottom of an unfathomable sea … Mr. Melville cannot do without savages so he makes half of his dramatis personae wild Indians, Malays, and other untamed humanities … What the author’s original intention in spinning his preposterous yarn was, it is impossible to guess; evidently, when we compare the first and third volumes, it was never carried out … Having said so much that may be interpreted as a censure, it is right that we should add a word of praise where deserved. There are sketches of scenes at sea, of whaling adventures, storms, and ship-life, equal to any we have ever met with … Mr. Herman Melville has earned a deservedly high reputation for his performances in descriptive fiction. He has gathered his own materials, and travelled along fresh and untrodden literary paths, exhibiting powers of no common order, and great originality. The more careful, therefore, should he be to maintain the fame he so rapidly acquired, and not waste his strength on such purposeless and unequal doings as these rambling volumes about spermaceti whales.” 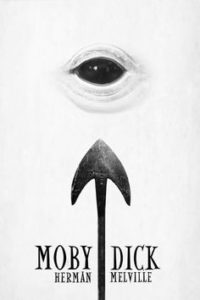 “Mr. Melville never writes naturally. His sentiment is forced, his wit is forced, and his enthusiasm is forced. And in his attempts to display to the utmost extent his powers of ‘fine writing,’ he has succeeded, we think, beyond his most sanguine expectations. The truth is, Mr. Melville has survived his reputation. If he had been contented with writing one or two books, he might have been famous, but his vanity has destroyed all his chances for immortality, or even of a good name with his own generation. For, in sober truth, Mr. Melville’s vanity is immeasurable. He will either be first among the book-making tribe, or he will be nowhere. He will centre all attention upon himself, or he will abandon the field of literature at once. From this morbid self-esteem, coupled with a most unbounded love of notoriety, spring all Mr. Melville’s efforts, all his rhetorical contortions, all his declamatory abuse of society, all his inflated sentiment, and all his insinuating licentiousness … We have no intention of quoting any passages just now from Moby Dick. The London journals, we understand, ‘have bestowed upon the work many flattering notices,’ and we should be loth to combat such high authority. But if there are any of our readers who wish to find examples of bad rhetoric, involved syntax, stilted sentiment and incoherent English, we will take the liberty of recommending to them this precious volume of Mr. Melville’s.”