Charlottesville, Brexit, and Trump: From News Cycle To Novel

Olivia Laing Makes the Switch to Fiction to Describe Our Awful, Chaotic Times

On the morning of Sunday, August 12th, 2017, around 500 white supremacists began to assemble in Emancipation Park, Charlottesville, Virginia for the Unite the Right rally. The group, which included armed militias, Klansmen and members of the alt-right, had come together to protest the removal of a statue of the Confederate general Robert E. Lee. Among the things they carried were Confederate and Nazi flags and semi-automatic weapons.

The rally quickly degenerated into open battles with anti-fascist counter-protestors. At 11, an hour before the official start time, the city declared a state of emergency. At 1:45, a man attending the rally drove a car into a crowd of counter-protestors and reversed, killing a woman, Heather Heyer. Video footage was on Twitter within minutes.

I was at home in England, watching in horror. I wrote down everything I saw, from the clothes the protestors were wearing (camo, aviators, belted chinos, tight red t-shirts emblazoned with the word FREEDOM) to the conspiracy theories that proliferated on Twitter over the next febrile few days. People warned of weapon caches, like in Rwanda. “It was the test run for a coup,” one woman explained. “There’s big $$ behind this.”

I wasn’t keeping a diary. I was writing a novel: a novel, that is, which was composed daily from the news. I’d started at the beginning of the summer, driven by a feeling that the world was going through a drastic change, the consequences of which seemed graver by the day. Twin victories for Trump and Brexit had inaugurated a season of chaos, cartoonish, frightening and increasingly violent.

I knew the summer of 2017 was a turning point, and that it would be written about by historians in the future, acquiring a shape and coherence it absolutely didn’t possess at the time. It was the messy moment itself I wanted to record, the limited perspective, the perpetual anxiety of not knowing what was happening or why. I called the book Crudo, meaning raw, and followed strict rules, like writing daily and resisting the temptation to refashion with hindsight. Everything went in, from the firing of Anthony Scaramucci and Steve Bannon to Trump’s tweets about the Houston floods (“Spirit of the people is incredible. Thanks! I will also be going to a wonderful state, Missouri, that I won by a lot in ’16”).

I’d never had an inclination to write a novel before. But there was no way I could do justice to the events of that summer by way of the kind of non-fiction I’d written in the past. By its very nature, non-fiction instills order and perspective, clarity and objectivity. It would lend an intelligibility that the events we were living through did not possess. The only way to capture the feeling of chaos, confusion and paranoia was by way of inhabiting an invented character’s consciousness.

“I knew the summer of 2017 was a turning point, and that it would be written about by historians in the future, acquiring a shape and coherence it absolutely didn’t possess at the time.”

There were precedents at the back of my mind, particularly Autumn and Winter by Ali Smith, the first two novels of her seasonal quartet, and Goodbye to Berlin by Christopher Isherwood. With the 2016 publication of Autumn, Smith accelerated the publishing industry’s normal stately and ponderous cycles, refashioning the novel as a rapid response unit for contemplating contemporary events. When I first read it, I couldn’t believe how current it felt, speeding hot on the heels of the Brexit referendum.

As for Isherwood, one of the gifs that did the rounds in the wake of the Charlottesville rally was of Michael York kicking over a Nazi flag in Cabaret, the campy 1979 film version of Isherwood’s 1939 novel. It went with the general “punch Nazis” mood of left-leaning social media. No such direct conflict occurs in the book. Instead it documents, by way of the famous “I am a camera” style, a domestic world that is slowly, insistently ruptured by the rise of fascism.

Goodbye to Berlin is a lightly fictionalized, episodic account of Isherwood’s own life in Berlin between 1930 and 1933. At first, Christopher is wholly absorbed by his own personal world. Politics flickers disquietingly at the corner of his vision. Holidaying on Ruegen Island, he observes Nazi flags flying above wicker beach chairs. Families have made inscriptions around their encampments, spelling out HEIL HITLER! in fir cones. In October 1930, he observes casually that the windows of the Jewish shops on the Leipzigerstrasse have been smashed.

All these things occur at the periphery, secondary to gossip and romantic intrigue. It is only very slowly that they begin to assume their true significance. On the morning of the Jewish boycott, Christopher goes into a department store, braving the uniformed SA boys on the door, and defiantly purchases a nutmeg grater. A Nazi demonstration is so heartily resisted by ordinary locals that he decides the real masters of Berlin are the workers. But a week later, Hitler is in power. Newspapers are abruptly full of rules and punishments, resembling school magazines. Isherwood’s tone is detached, even flippant, but by the book’s end, friends and acquaintances are being taken away to camps, where they are tortured or die of “heart attacks.”

“By its very nature, non-fiction instills order and perspective, clarity and objectivity. . . . The only way to capture the feeling of chaos, confusion and paranoia was by way of inhabiting an invented character’s consciousness.”

Too many lazy comparisons are made between Germany of the early 1930s and the present day USA, but it’s apparent that in both periods the commodity of truth was under assault. As Smith puts it on the first page of 2017’s Winter: “Truth and fiction were both dead.” In the 1930s as now, this was at least partially the result of a leader who compulsively lied while perpetually accusing the Lügenpresse, the FakeNewsMedia, of the same crime.

In such a climate, what’s the point of making things up? But fiction can be a way of snatching back the truth, a room to reflect and regroup. Fiction can serve as evidence, therapy or catharsis, it can set down a kind of psychic reality, it can let you catch sight of the facts and it can give you the appetite to make them matter again.

Personally, I wasn’t so interested in plot as in capturing the constant interruption, the sense that every piece of unsettling news was being abruptly overtaken by another, that there were no visible conclusions to the stories, only a proliferation of bad consequences, waiting implacably a little further down the road. The summer resembled a party Isherwood described as “like the dress-rehearsal of a disaster. It is like the last night of an epoch.” You could speculate, but you didn’t know and the anxiety was sickening. Someone was being hurt out there, even if it wasn’t yet you.

One of the main consequence of the sickening speed with which the news cycle was moving was a dangerous kind of numbness. Isherwood observed it too, the way a populace adapted itself shruggingly to a new order, subdued by random acts of violence against a group that could be isolated and excluded, swiftly abandoning the opinions and morals to which they had once cleaved.

In Crudo, I kept coming back to the painter Philip Guston, another artist who abruptly changed forms, abandoning the lofty precincts of abstract expressionism in order to paint cartoonish, frightening images of Klansmen in their off-duty hours. He was obsessed with numbness, too. Like Isherwood, he knew the hells it could be used to facilitate. You had to unnumb yourself, it was essential. That’s the only reason to be an artist, he said, “to escape, to bear witness to this.”

Olivia Laing is the author of Everybody, To the River, The Trip to Echo Spring and The Lonely City, which has been translated into 18 languages and sold over 100,000 copies worldwide. Her first novel, Crudo, was a Sunday Times top ten bestseller and won the 2019 James Tait Memorial Prize. She’s a Fellow of the Royal Society of Literature and in 2018 was awarded a Windham-Campbell Prize for non-fiction. Her collected writing on art, Funny Weather: Art in an Emergency, was published in 2020.

Inside the Weddings of 10 Famous Writers

The Story We Don't Talk About:
On Irishness, Immigration, and Race 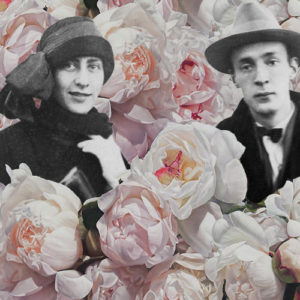 Inside the Weddings of 10 Famous Writers

Somehow, it's still wedding season, which now appears to last from March to November! Not that I'm complaining. I find weddings...
© LitHub
Back to top