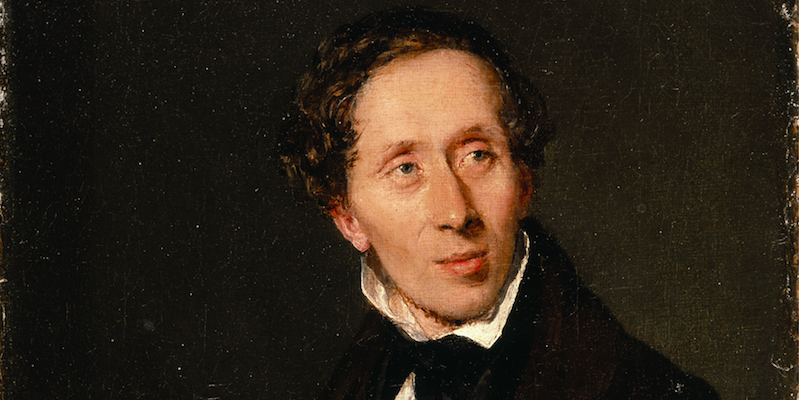 Charles Dickens and Hans Christian Andersen first met at a party in the summer of 1847. Andersen was not yet well known in England (his stories were being translated from Danish for the first time), and he was starry-eyed, introducing himself to the much more famous Dickens and calling him “the greatest writer of our time.” Which is nice. A little much, maybe, but definitely nice.

They had a friendly conversation—afterwards, Andersen wrote a letter to his friends in Denmark, ecstatic that Dickens had lived up to his hopes. Andersen apparently made a good impression on Dickens, too, because a few weeks later, Dickens sent him a package containing some of his books, and a personal note.

Perhaps a little too encouraged by this gesture, Andersen sent Dickens regular letters for the next nine years. Annoyed by the correspondence, in 1856 Dickens insincerely and curtly mentioned (in a letter laden with the kind of weird flattery that often conceals petty meanness) that Anderson would be welcome to stay with his family, if he were ever in the neighborhood. Which, he absolutely, definitely did not mean.

But in March of 1857, Andersen earnestly wrote to Dickens to say that he was traveling to England, for no more than a fortnight, to take Dickens up on his offer. And so, in June of that year, Andersen showed up to Gad’s Hill, Dickens’s country estate in Higham, ready to become roommates with his hero. “My visit is for you alone,” he wrote. “Above all, always leave me a small corner in your heart.”

(If it weren’t for the fact that Andersen seems kind of cluelessly sweet, this would sound like horror movie. I’ve definitely seen this horror movie.)

Although the Dickens family was expecting him, in a way, they could have never expected him. Andersen, socially awkward and apparently one of the nineteenth century’s premier literary softbois, was not good at picking up on social cues or maintaining any kind of formal demeanor, demanding in one way or the other that he remain the center of attention. When he arrived, he asked that one of Dickens’s own sons give him a daily shave, explaining that this was a custom for hosting male guests in Denmark. Weirded out, Dickens made him a daily appointment at a nearby barbershop instead. One night, during a dinner, when Dickens held an arm out to one of the ladies present, Anderson scooted over and grabbed it himself, and walked with Dickens arm-in-arm into the dining room. Which is not even to mention the fact that he stayed for three weeks longer than he had originally proposed.

Now, this was a particularly bad time for Dickens to have any (let alone such an oblivious) houseguest—Little Dorritt was not doing so well critically, and he was attempting to leave his wife for a woman half his age. Plus, he was acting in a play—his friend Wilkie Collins’s play The Frozen Deep. So, he was clearly a busy man, doing many important things.

Then again, Andersen was difficult to be around. At the premiere of The Frozen Deep (with Dickens in the leading role and Queen Victoria in the audience), he loudly burst into tears. Afterwards, he apparently sulked because his presence at the event was not noted more highly. And when he learned that one of his pieces received a negative review, he hurled himself down on the Dickens family lawn and passionately wept. Despite this spectacle, Dickens’s daughter Kate called him “a bony bore.”

It is speculated by some that Dickens may have based his gaunt, obsequious character Uriah Heap on his guest. It is assumed that Anderson based his character of the Ugly Duckling on himself.

Dickens complained about his guest extensively in his letters, nitpicking over all manner of harmless quirks. A country boy, Andersen was suspicious that he would be pick-pocketed in the city, and Dickens caustically wrote that, one time, a cab driver took Andersen on an alternate route through London, leading Andersen to conclude that he was about to be robbed and murdered, so he shoved all of his belongings into his boots (including his watch, money, a train timetable, “a pocket-book, a pair of scissors, a penknife,” and some other items, including, apparently, two small books). He got corns on his feet, Dickens wasted no time in mentioning.

Dickens was also suspicious about Andersen’s love for crafting, complaining “he cut out paper into all sorts of patterns, and gathered the strangest little nosegays in the woods.” He decorated Wilkie Collins’s hat with a daisy chain, which made the unsuspecting Collins a subject for local ridicule.

But the worst mudslinging came about Andersen’s writing and speaking abilities. Dickens told one friend, when inviting him over, “Hans Christian Andersen may perhaps be with us, but you won’t mind him—especially as he speaks no language but his own Danish, and is suspected of not even knowing that.”

He also complained, “He could not pronounce the name of his own book The Improvisatore, in Italian; and his [translator] appears to make out that he can’t speak Danish.” And, “He spoke French like Peter the Wild Boy and English like the Deaf and Dumb School.”

Which is, wow, incredibly mean.

After Andersen left (he sensed he was no longer welcome, and cried upon his departure, too), he sent along an apology note. “Kindly forget,” he pleaded, “the unfavorable aspect which our life together may have shown you of me.” Dickens, himself, wrote a note on the mirror of the guest room in his house: “Hans Andersen slept in this room for five weeks—which seemed to the family AGES!”

Despite that both men seemed pretty not great in different ways (Andersen was insensitively sensitive, and Dickens was just plain nasty), this interlude does remind us that while, sometimes, you can meet your heroes… maybe just don’t let your fans live with you. In your house.