Mark Haber on the Newly Translated Ema the Captive

I love the uncertainty that comes when encountering something new. When I first read César Aira’s An Episode in the Life of a Landscape Painter, I couldn’t explain exactly what I had read. Toward the beginning, the novel struck me as an historical oddity, even a touch conventional, but then something happened, something I would come to recognize in each of Aira’s novels: the story bends. What at first seems like a digression, perhaps a whim of the author, becomes the story itself. In Episode the main character—framed after real-life German artist Johann Moritz Rugendas—is struck by lightning and suddenly the novel shifts. The reader is submerged in another world, a world wholly Aira’s own and which I would later come to know and love. It’s a world where seamstresses fly, ghosts are real, resplendent queens breed golden pheasants and shantytowns exist in self-governed circles that operate by their own laws of nature.

To read any one of César Aira’s highly imaginative and compact novels is to subject oneself to the whims of an authentic mind, a writer who appears to make it up as he goes along. Indeed, I’ve often described Aira as a children’s writer for adults. And that’s no criticism. What do I mean exactly? I mean that he follows that most cardinal and innocent of urges: to make something up. It’s a simple edict. But Cesar Aira is no simple writer.

These days there is a strong urge towards perfectionism; writers want to edit (and be edited) until not a single word or idea or image is misplaced. A fine-cut jewel, a diamond rendered flawless. Aira seems to shrug at this. The reader can almost see him just beyond any one of his dazzling pages, clicking his tongue, wagging his finger, urging us to stop taking ourselves so seriously. Aira isn’t as concerned with starting and stopping as he is with going. A reader can feel this momentum in any number of his books, the ecstatic urge to move forward at any cost. Of course, as any writer is happy to tell you, this is a surefire prescription for writing oneself into a corner. Where are the plans, we ask! Where is the plot structure? And there once more is Aira, smirking, telling us not to worry, he’ll find a way out.

Aira’s approach to writing has been well documented and I won’t go into it here. Suffice to say, his attitude toward writing something “perfect” is probably seen by him as preposterous because after all, what is perfect? This is probably why the sheer volume of his novels in Spanish is immeasurable (standing somewhere over 80). They may not all be masterpieces, but it says something about his eccentric and inventive mind, the sense of wonder and imagination that has allowed him to create a singular and wondrous universe, much like his fellow countryman Borges. In English alone, his novels are a testament to the possible. And though it’s easy to think Aira is just making it up as he goes along, it’s misleading to believe an author as penetrating as Aira doesn’t know exactly what he’s doing.

His latest book to be translated, Ema the Captive, is not only one of his earliest books—it may be his finest. As such, it also works as a perfect introduction to the Aira universe. The tone is neutral, the writing lucid, and the translation by Chris Andrews graceful; all of this allows Aira to take the gigantic leaps and sharp turns his novels require. The setting is 19th-century Argentina, where Indian tribes live scattered across the land and European settlers are busy building empires and acquiring slaves. It opens on a silent and listless wagon train crossing the pampas. It’s a harsh world. Soldiers are leading a slave caravan and the slaves (or convicts) are all on the verge of starving to death as well as getting raped and beaten. Early in the novel I was reminded of Coetzee’s Waiting For the Barbarians, a world of history but history made anew. As always, Aira’s eye for detail is stunning:

On this journey, prisoners and soldiers lived on the same diet of jerky and biscuits, except that the prisoners were given half rations. They had no reason to lament this, since they expended no energy at all, and passed the time sleeping, propped against one another in the wagons. As for the officers, they regularly accompanied (or replaced) this standard fare with brandy. Their alimentary routine was modified only when they came across a flock of rheas or partridges, or flushed out a quail or a hare, whose flight the lieutenant would take pleasure in stopping with a well-aimed shot.

Early on, the novel focuses on an unnamed Frenchman new to the continent. Even the most experienced reader would believe he’s the protagonist, the escort with whose eyes we readers will see the world. But it isn’t long before the story does that thing that I mentioned earlier; it bends. The unnamed Frenchman disappears. And, soon thereafter, the reader meets the novel’s namesake. Ema is a woman of mixed origins and untold beauty. There is an abduction and she is taken captive, but Ema is remarkable for her strength and adaptability. She’s stoic and elegant and ambitious, all without fanfare. Her ambition and talent are accepted by everyone she comes across, Indian chiefs and princes alike. The reader, like the characters who surround her, are both daunted and fascinated by Ema, for she is all instinct. She simply is. Not only is Ema a savvy businesswoman but she commands the attention of powerful leaders too. In fact, being a prisoner never feels like a restraint in Ema’s world, but more an obstruction she expertly navigates.

The world of Ema is lush and fantastic, but never overbearing; the reader is immersed in a landscape still teetering on the edge of innocence, awash with animals and scents almost impossible to imagine in our modern times. From body-painting to lantern-lit caves to the mating of manatees, the world that Ema—and the lucky reader—inhibit is wondrous and new, even if it’s the imagined past. Aira is able to reap the most sensuous images from the smallest details:

Ema went to the river to wash her baby. She sat on a rock with her feet in the water, beyond the place where the children played. The tepid, roundabout flow wet her skin. She cupped a few drops in her hand and washed Francisco’s face. He wriggled. It was quiet and calm; she let a daydream carry her away. Suddenly, right in front of them, almost between Ema’s feet, the head of an Indian emerged from the water; he had approached below the surface to surprise her. A face with asymmetrical features, a huge mouth, and the squinting eyes that were so common among the savages.

Ema the Captive is not so much driven by plot as movement and the feeling that we’re witnessing life happen to Ema. The story navigates the ebbs and flows of Ema’s life and always in unexpected ways. The novel is an examination of what happens when humans and the natural world begin to divorce, when colonial morals are forced upon a continent and when the lust for money overtakes the love of authentic life. The story made me long for a world that probably never existed but I still felt homesick for. Ema the Captive is astonishing and wondrous, a book that has invention and history locked hand in hand, reminding us why reading brings such sensual and selfish joy. Aira’s novels are theaters of images married to hard-fought ideas and Ema the Captive (in essence a South American Western) is a carpet ride through history that manages to invoke ideas about gender, colonialism and nature. As such, it’s easily one of Aira’s strongest and most original novels, as well as one of the best novels of the year.

Mark Haber is the author of the 2019 novel, Reinhardt's Garden, nominated for the 2020 PEN/Hemingway Award and the forthcoming novel, Saint Sebastian's Abyss, both from Coffee House Press.

Writing the Body: Trauma, Illness, Sexuality, and Beyond 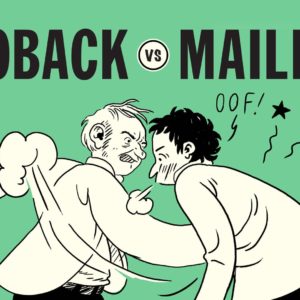 This is how legends—literary and otherwise—are made: story after retold story, spun out over food or drinks, passed...
© LitHub
Back to top