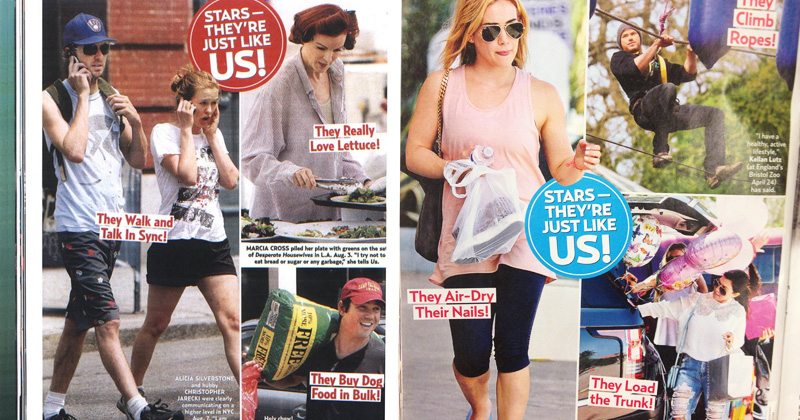 Is it more embarrassing to be a celebrity or to be around one? On the one hand, a friend of mine once farted in an elevator with Kevin Spacey. On the other, Ed Sheeran exists, and so do his tattoos. While famous people discover newer and better mediums for embarrassing themselves—hello, Twitter—it’s still mercifully difficult to humiliate yourself in front of them. A celebrity might, if you’re outspoken and unlucky, own you on social media. But, offline, few of us will own ourselves on the right elevator at the wrong time.

Once, as the author Julie Klam writes in her new book The Stars in Our Eyes, celebrity meant “Julius Caesar and Cleopatra.” Now, it can mean “some woman on Instagram who does nude yoga and has 3.5 million followers.” Everything about fame has changed except the queasy pull of its fascination, which Klam claims to feel more than most. “I’ve been enamored of celebrities since I’ve been conscious of TV and movies and records and sports,” she writes in the book’s opening pages. It’s that enamored consciousness that makes her “uniquely qualified to write” a book on celebrity: “what [it] means, why we care so much, why I care so much, and why you probably do, too.”

That’s a lot of whys, and Klam has answers for most of them. In The Stars In Our Eyes’ 15 chapters, she also applies herself to the pressing questions of child stars (why are they so sad?), reality TV stars (why are they so boring?), the enduring appeal of Jennifer Aniston (wherefore Angelina?), among others. One blurb by the essayist Meghan Daum describes The Stars in Our Eyes as the work of “a social anthropologist,” which both overstates its seriousness and undercuts its charm. Klam, refreshingly, never positions herself as a scholar of celebrity. She writes like a gossipy spectator, armed with a tape recorder and wry, unhurried style; there’s a pleasant aimlessness to The Stars in Our Eyes, like a waiting-room conversation about a backissue of People. Seldom does Klam show any interest in the the politics of popular culture. Mostly, it’s the texture of fame—stifling, sticky, irresistible—that she’s feeling for.

As a book largely constituted by celebrity interviews, The Stars in Our Eyes is driven by impolite curiosity, and Klam excels at getting frank answers for nosy questions. Early on, she sits down with 80s teen idol Timothy Hutton, who first imprinted on her preteen subconscious when “his lovely, pained face filled the screen” of Robert Redford’s 1990 film Ordinary People. Although Klam grows up—and starts a career as a celebrity journalist—she never gets over of her crush. Instead, she gets a Twitter account. There, she starts chatting with the “Man himself, Mr. Timothy Hutton,” and their friendship goes offline. Klam eventually scores an interview with Hutton for her book, she can’t look at him, as she writes, without thinking “OH MY GOD, IT’S TIMOTHY HUTTON.”  This fluttery enthusiasm is typical of how Klam writes of her proximity to celebrity: as a contact high, rather than a humlebrag. For Klam, celebrities can be many things, but they’re never people you get used to.

But celebrities do get used to us—and Klam’s subjects are never more interesting than when they cop to being bored. They set the swooning strangeness of new-found fame against the monotony of maintaining it. Klam’s beloved Timothy Hutton is particularly forthright about celebrity etiquette: If you’re a celebrity, and your name, for instance, is Timothy Hutton, you must graciously allow yourself to be confused with Timothy Robbins for the rest of your professional life. You must brook false accusations that you starred in Armageddon. You must pretend that you neither crave fame nor resent its effects. Stars—even male ones from the 80s—must strive to be “relatable”: the compliment paid to the very famous when they credibly impersonate regular people.

“What does the myth of relatability really do, besides sell us things? One answer is that it embroiders our own self-image as much as the celebrity’s.”

Klam, though, is fascinated with celebrities not because they’re like us but precisely because they aren’t. It’s that assumption that distinguishes Klam’s book from other recent titles on celebrity culture, notably Sady Doyle’s Trainwreck and Anne Helen Petersen’s Too Fat, Too Slutty, Too Loud. Both books—published, respectively, in September of last year and this June—read political instruction into the plight of the despised celebrity woman, touching on figures as varied as Mary Wollstonecraft and Britney Spears (Doyle) and Hillary Clinton and Nicki Minaj (Petersen). To both authors, these women’s mistreatment in the media reveals the misogyny that shapes appraisals of both famous and non-famous women. By behaving badly—becoming a “trainwreck,” or, in Petersen’s language, “unruly”—celebrities ostensibly defy the imperatives of a sexist culture.

These arguments, though, can feel like a highbrow rehashing of the tabloid claim that celebs are “just like us”—if not for grocery shopping, then for suffering under gendered oppression. This isn’t to say that there’s nothing to learn from serious analysis of celebrity culture—few things command more of the collective psyche than the body of the celebrity woman. But, as Jia Tolentino and Bridget Read have suggested, the forced analogy between the travails of celebrities and the feminist commonweal is, at best, overstated. At worst, it elides class politics, smoothing over differences of wealth and power that buffer the rich from the poor.

Moreover, if the antics of famous women somehow resist the colluding forces of patriarchy and capitalism, they still have an uncanny way of increasing celebrities’ market value. There’s no reason to believe that Hillary Clinton’s turn as a “nasty woman” effectively subverted patriarchy, but every reason to believe that it effectively sold t-shirts.

What does the myth of relatability really do, then, besides sell us things? One answer is that it embroiders our own self-image as much as the celebrity’s. The famous are never relatable when they’re abandoning their pet monkeys or chucking their cell phones at secretaries—that is, when they exhibit the deeply relatable quality of human unkindness. It’s only when they’re being funny on talkshows or cute with children that we that we wish to see ourselves reflected in the surface of fame. To remind us of ourselves, celebrities have to behave better than we are; to pass as regular people, they must surpass expectations that regular people seldom abide. After all, we don’t need strangers on the street to be “relatable”; we just need them not to ruin our day.

What, then, do we expect of celebrities when we do encounter them on the street? In The Stars in Our Eyes, Klam explores the question in a series of intermittent, endearing sections she calls “intermissions,” which also revive an endangered form of citizen’s journalism: the story of the celebrity encounter. Klam interviews her non-famous friends about their glimpses of famous people in the wild, and the anecdotes are sweeter and stranger than interviews with celebrities themselves. One woman describes driving to a Bruce Springsteen concert and seeing Bruce himself roll down his window to tip a street juggler: “Bruce smiled at me. I tried to reach for him. My arms went out of the cab to reach for him. I must have looked like one of those desperate sinners in the Renaissance paintings of Italian masters, flailing to be rescued as they fry in the flames of hell.” Another describes getting trapped, unwittingly, behind Gary Busey at a crowded restaurant: “He turns his head around—just his head around—and says You’ll get by. You’ll get by. Then he turns his head back around and continues to talk to his friends.”

Celebrity sightings of this kind—plotless, unmotivated, possibly apocryphal—can’t be verified, and feel closer in kind to urban lore than tabloid reporting or cultural criticism. Which also gives them the effect of restoring intrigue to celebrity in a time when celebrities are more boringly accessible than ever. It’s hard not to wonder what will happen to this kind of story now that social media has allowed celebrities to stage-manage every serendipitous encounter: run-ins with fans, when documented on Twitter or Instagram, now have the unavoidable whiff of a PR prefabricated meet-and-greet. If the true celebrity anecdote—of the kind once documented by Gawker Stalker—depended on celebrities’ assumption, however false, of being unobserved, the constant monitoring of social media has made the best of these stories a rare occurrence.

Which is a shame. What’s clear, on reading these anecdotes, is that celebrities delight us not when they behave like thin approximations of “regular people”—glumly modest and  scrubbed of ego—but when they behave like the celebrities they are. I don’t want Gary Busey to say “Sorry, excuse me” at a crowded restaurant; I want him to be an alienating cipher with weird hair and a baffling response to social cues. I want Bruce Springsteen to materialize in a black SUV in front of his own concert and tip a juggler—a juggler!—before speeding off in a motorcade. Neither of these anecdotes illustrate “relatability,” per se—Busey is too weird, Bruce is too wonderful—but they tender something odd and precious. They remind us that we’re drawn to stars not for their impersonations of regular people but for their excellence at  impersonating themselves.

If celebrities are “like us,” it’s in the fact that they, like everyone, have a right to their personas. The celebrity persona is a product in a way that all of our personas are products, manufactured for the consumption of our bosses, our friends, our families, or merely for ourselves as we try on ways of being in the world. The difference, of course, is that the celebrity persona sells for millions, and is used, often cynically, to sell social movements and political candidates. That intrusion into political life is costly for everyone, of course, but seldom for celebrities themselves.

If there’s a special joy, in encountering celebrity in the wild, it might be because, for once, we’re getting something for free. 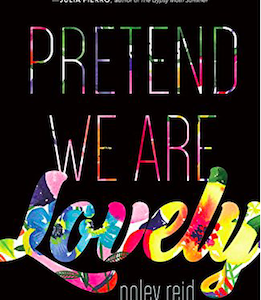 Enid I’m her girl, the second. The baby. Or third, if you count my brother. We live in Blacksburg, Virginia, on a dead...
© LitHub
Back to top