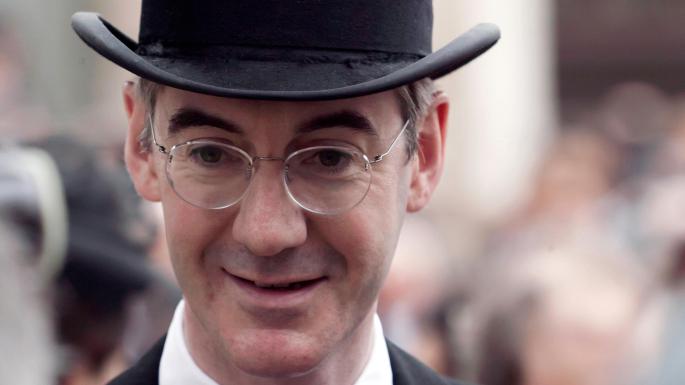 The name Jacob Rees-Mogg might not mean a lot to most Americans, hypnotized as they are by the orange glow of their own garbage fire, but alongside former London mayor Boris Johnson and former UKIP leader Nigel Farage, the ludicrously affected conservative ideologue (whose political views have been described as reactionary, uber-traditionalist, nationalist, socially conservative, and right-wing populist, and who famously once campaigned with his highborn family’s nanny) was one of the true pantomime villains of the Brexit debacle.

Now that he’s helped pied piper the people of Britain into a humiliating purgatory from which they will likely never emerge, Rees-Moog has decided to publish a history book. The Victorians is a nostalgic take on a dozen historical figures from the Victorian era, a period which Rees-Mogg argues shows the “spirit, drive and values” that forged modern Britain.

Thankfully, though wholly unsurprisingly, it is getting savaged. Here’s just a taste of what the critics across the pond have written:

“The Victorians consists of a dozen clumsily written pompous schoolboy compositions about 19th-century characters … At this point in the book you start to think that the author is worse than a twit. By all means let us celebrate what was great about the Victorians, but there is something morally repellent about a book that can gloss over massacres and pillage on the scale perpetrated by Napier and that does not spell out the nauseating facts behind Rees-Mogg’s weaselly phrase: ‘More than half of British revenue in India in this period was accounted for by duties levied on the trade in opium.’ The enforcement of the opium ‘trade’ on China, the genocidal killings, the vandalism, the destruction, is passed over in total silence … Rees-Mogg proudly says at the outset that his book will be ‘anathema to the present-day politically correct elite.’ But also anathema, surely, to anyone with an ounce of historical, or simply common, sense.”

–AN Wilson (The Times)

“Rees-Mogg appears to have made a virtue of ignoring most relevant scholarship of the past 50 years, and the irony is that—for all his fan-boying over General Gordon and Co—he has little interest in the actual Victorians. Instead the esteemed member for North East Somerset prefers to rehash half-remembered anecdotes from a Boy’s Own story, or perhaps tales told by his nanny. The book really belongs in the celebrity autobiography section of the bookstore. At best, it can be seen as a curious artifact of the kind of sentimental jingoism and empire-nostalgia currently afflicting our country.”

–Kim A. Wagner (The Observer)

“This, then, is biography as manifesto, although even that is to dignify The Victorians with a coherence it doesn’t possess … For him, the sovereign individual really is able to master their own destiny. Nothing—poverty, ill-health, institutional racism—can stand in the way of someone with the right attitude and work ethic. Most people grow out of this fantasy of omnipotence by the age of five, about the same time they realise that Superman isn’t real. For those who never manage to make that cognitive leap, adult life can be excruciating. In parliament, Rees-Mogg is often referred to as ‘the honorable member for the 18th century,’ a nod to those funny clothes he wears, along with pretending not to know the name of any modern pop songs. What a shame, then, that he has not absorbed any of the intellectual and creative elegance that flourished during that period.”

“…if the past two years have taught us anything, it is that the best-laid plans can go hopelessly awry. May’s premiership is in tatters, the Tories are staring at electoral oblivion and Britain is trapped in Brexit limbo. But Rees-Mogg has not let us down. Right on cue his book has arrived, perfectly timed for the 200th anniversary of Queen Victoria’s birth. The only problem is that it is absolutely abysmal. I say that, by the way, with some regret. No doubt every sanctimonious academic in the country has already decided that Rees-Mogg’s book has to be dreadful, so it would have been fun to disappoint them. But there is just no denying it: the book is terrible, so bad, so boring, so mind-bogglingly banal that if it had been written by anybody else it would never have been published.”