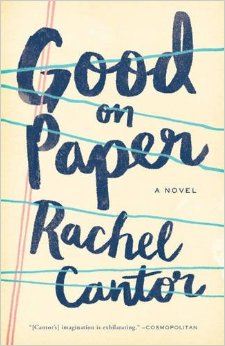 The following is from Rachel Cantor’s novel, Good on Paper. Cantor was raised in Rome and Connecticut. She is the author of the novel A Highly Unlikely Scenario, and her short stories have appeared in The Paris Review, One Story, Ninth Letter, and The Kenyon Review, among other publications. She lives in Brooklyn.

Please, the telegram read, you do to me the pleasure of translating my work. I am calling to you soon. Grazie. Romei.

Romei? As in the poet, winner of last year’s Nobel Prize for Literature, the only constellation in my sky for one sad moment in the eighties? Had Ahmad not said what he’d said, I’d have assumed the joke was his. (Last month, “Sonny Mehta” called, asking if I’d translate jet-engine specs for an anthology tentatively titled Heaving on a Jet Plane. I retaliated by having a barista leave messages from “Ollie North,” asking if Ahmad could keep a secret.) Ahmad didn’t approve of my underemployment, not when (according to him) the U.N.’s Food and Agriculture Organization, located in Rome for reasons best known to history, would pay me good lire to translate reports on wheat varieties and integrated pest management: he knew someone who knew someone who definitely knew someone!

This joke wasn’t Ahmad’s, but I knew any number of translators, some of them exes, who were capable of such high humor.

I crumpled the telegram and threw it like a fast ball toward the kitchen.

Andi was at my side again, holding her satin hangers.

Your mom’s a litterer, I said. You have homework?

I must have looked at her blankly.

Right, I said. Play till dinner. I’ve got to think about some things.

We reconvened for tea. And cereal, because I hadn’t had lunch. Ahmad tried to convince me the offer was serious. Why not? he asked.

It’s not even an offer—it’s a maybe offer. Besides, I know who did this, and it’s not a Nobel Prize–winning poet. Pass the milk, please.

It doesn’t matter, I said, looking pointedly at Andi. Just a person I used to know. A person who likes attention.

A translator, I said. Someone I used to know but don’t know anymore.

Did I know you once knew this person?

After Ahmad and Roger broke up, we agreed never to bring men home again, not in thought, word, or deed. Out of consideration for Andi and, frankly, each other. An understanding we’d formalized one evening by spitting Armagnac out the window. Though usually we debriefed at the end of an off-site affair—debriefings Ahmad called man-wakes. Not this time.

You going to call him on it? Ahmad asked.

I’m going to give this telegram the attention it deserves.

Mommy littered with it, Andi explained.

I nodded, and the buzzer rang. It was a delivery guy. Holding a fax machine and a case of European A4-sized paper. And a note thanking me for doing the honore: I must communicate with Romei only by fax, his work must never be interrupted by telephone. He would call to me; I would receive the first section “anon.”

The note had a fax number. It looked like a Roman telephone number. I brought my cereal to the study.

The study, just off the kitchen, was small but large enough for Ahmad’s velveteen loveseat, a floor-to-ceiling bookcase, and an escritoire, on which rested my computer, slow but serviceable. It had once been an industrial-size walk-in pantry, back in the day when university professors “entertained”; since that ancient time, someone had removed the shelves and added track lighting, probably so it could serve exactly this purpose. Ahmad had his office at school, and that office had amenities like doors and windows, so this little room was mine. I’d rigged a door out of a drape and curtain rod, which offended Ahmad’s aesthetic sensibility, but it was better, he said, than watching me hunt and peck at the keyboard while he was trying to cook.

I turned on my computer and visited the chat room of the Translators of Note. I was, nominally, a member, though largely on sufferance: I still went to meetings and organized our chapter’s annual Bloomsday pub hop, but my translation oeuvre was not substantial. It consisted of what I’d managed to finish of Dante’s Vita Nuova before I dropped out of grad school, plus a slim volume of stories by a writer who, like me, was said never to have reached her potential, and a few feuilletons—always the lesser-known works of lesser-known writers. It goes without saying that I never earned two dollars doing this good work. Except once: a suspect Italian-American society commissioned me to translate D’Annunzio, but they ran out of cash by chapter three.

I had a few projects going—a volume of Calabrian ghost tales, poems by a Trilussa contemporary—though by going I mean that I thought about them once in a while. They didn’t capture my imagination, and always it seemed my spare time was better spent otherwise, like doing laundry or taking Andi to the park.

In the chat room, Josh, prime suspect, had been pronouncing just that afternoon. Using the handle “Chive Pancake,” he’d shared his too-extensive opinions about an Ionesco opening he’d seen in Brooklyn the night before, performed by Kabuki actors—the lousy translation, the perfectly awful set design. He’d been comped by the lead actress, don’t you know. He definitely was not in Rome.

If he hadn’t sent the telegram, who had?

I had Ahmad hook up the fax machine on one of the shelves of my bookcase, then sent my own note:

I don’t know who you are but your joke isn’t funny. Go away.

From GOOD ON PAPER. Used with permission of Melville House Books. Copyright © 2016 by Rachel Cantor. 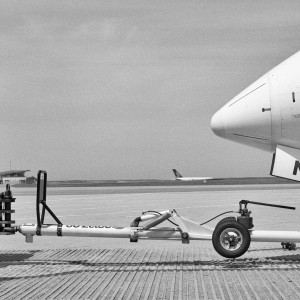