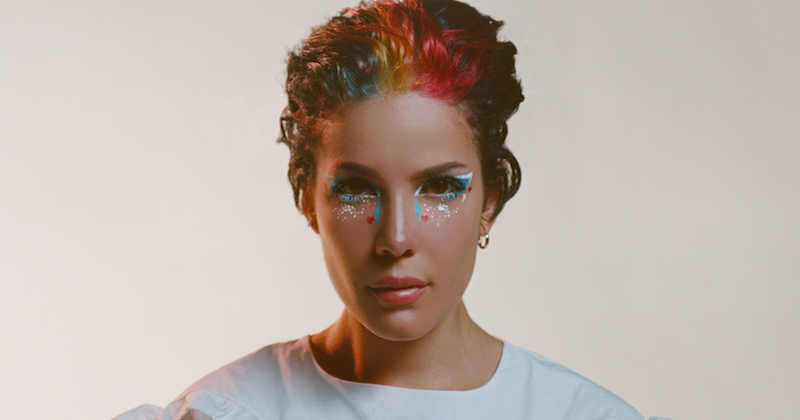 Can you spot the difference between a Halsey lyric and a line of Instapoetry?

Today, August 27, marks the release of singer-songwriter Halsey’s fourth studio album, If I Can’t Have Love, I Want Power. I’m not a Halsey superfan, but I do like some of their singles and they’ve had some interesting visuals. (Halsey uses she/they pronouns, which was confirmed in a March 2021 Instagram post.) And, if you’re like me, and still lurking on the Livejournal-hosted celebrity gossip site, Oh No They Didn’t!, you’ll know that Halsey (government name: Ashley Nicolette Frangipane) used to be just like us, posting One Direction fan fiction on their Tumblr and spending time at the local mall.

Their latest album is an ambitious step in a different direction, centering on the horrors and joys of childbirth and pregnancy. Rolling Stone notes, “the songs are somewhat of a heavy-handed introduction to an album that’s at its most interesting when it’s not signaling its depth or using foreboding production as a surrogate for intensity.” A short film accompanied the album.

Halsey has never been a stranger to a concept album. Their second album, Hopeless Fountain Kingdom (2017), was a gender-swapped electropop take on Romeo and Juliet. The video for “Now or Never” is an obvious homage to Baz Luhrmann’s 1996 adaptation of Shakespeare’s play. Like previous releases, this fourth album is fully committed to its cinematic vision of unpacking society’s expectations of womanhood, leaning heavily on reimagining and dismantling the Madonna/Whore dichotomy. However, one thing that makes If I Can’t Have Love, I Want Power noticeably different is Halsey’s choice of collaborators: Nine Inch Nails mastermind Trent Reznor and NIN bandmate and producer Atticus Ross.

Now, as someone who is an unapologetic Nine Inch Nails fan (stan), this caught my attention. NIN is one of my favorite bands, if not my actual favorite, and I think Reznor is a musical genius and all-around interesting, smart person. Every NIN show I’ve attended has been a sensory delight. After so many years of being a devoted listener, his musical style or “signature” is pretty easy to spot, so the prospect of someone like Halsey joining forces with Reznor is intriguing.

With that said, and I mean no disrespect, but sometimes Ashley, that girl who boldly confessed all her feelings on Tumblr, still peeks through the Halsey persona. In this sense, Halsey’s confessional lyrics sometimes remind me of the cohort of poets who post on Instagram, otherwise known as “Instapoets.” I know most “serious” literary people don’t even consider this “real” poetry, but there are some genuinely talented poets on Instagram, such as Warsan Shire. Shire even caught the attention of Queen Beyoncé herself, who enlisted Shire’s talents for her visual album Lemonade. And whatever you may think about Rupi Kaur, she’s proven that she’s got a loyal following and the sales to match. She’s even got her own Amazon-backed special, which is available for streaming in North America today.

Halsey has also ventured into the world of poetry, having published their first collection, I Would Leave Me If I Could., via Simon & Schuster in 2020. A Vogue interview conducted right before the release of the collection revealed that even before Halsey had officially signed a record deal, their poetry on Tumblr was extremely popular—a single breakup poem was reblogged 820,000 times.

So, now that Tumblr has basically become an internet graveyard, how does Halsey’s lyrics stack up against the world of Instapoets? Test your knowledge below. Answers all the way at the bottom; no cheating!

1. i do not want to have you
to fill the empty parts of me
i want to be full on my own
i want to so complete
i could light a whole city

2. Your little brother never tells you but he loves you so
You said your mother only smiled on her TV show
You’re only happy when your sorry head is filled with dope
I’ll hope you make it to the day you’re 28 years old

4. Tell me, how’s it feel sittin’ up there?
Feelin’ so high, but too far away to hold me
You know I’m the one who put you up there

5. How do I thank my mother
for giving me the life
she desperately wanted
for herself?