Can you solve the very first published crossword puzzle?

As the omicron variant rages through my body this week, I’m enjoying taking my mind of my concerns by solving crossword puzzles. As it turns out, that’s a timeless (or rather, somewhat time-sensitive but historically precedented) pursuit: crossword puzzles became popularized during WWI, when headlines grew darker and darker and newspapers were desperate to point their readers to a spot of joy.

Today in 1913, pre-WWI, Arthur Wynne ran the first crossword puzzle of all time in the New York World; he, an editor there, invented the puzzle himself and called it “FUN’s Word-Cross Puzzle.” (A few weeks later, a typographical error rendered the puzzle’s title “Cross-Word,” and the name stuck.) Starting there, crossword puzzles became more and more popular; the World started running front-page banners pointing readers to the puzzle, and the crossword became a selling point.

As Adrienne Raphel reported in Thinking Inside The Box: Adventures with Crosswords and the Puzzling People Who Can’t Live Without Them, despite readers obviously loving crossword puzzles, for decades one institution disdained them: The New York Times. For a few decades, the Times was the only major metropolitan newspaper in America without a crossword puzzle, and through the 20’s and 30’s, the paper ran op-eds decrying crosswords as a passing lowbrow craze. But in 1942—two months after Pearl Harbor—the Times gave in and added a crossword section, to “keep readers sane with the rest of the news so bleak [and] provide readers something to occupy time during coming blackout days.”

So if you’re looking for a throwback—or just a simple and fun task—in these precedented times, try solving that very first crossword puzzle that ran in the New York World today 108 years ago: 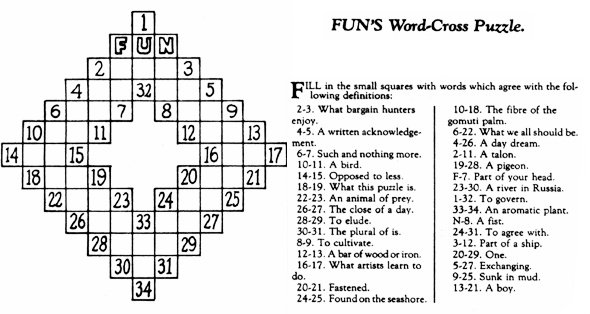 You can check your answers here.