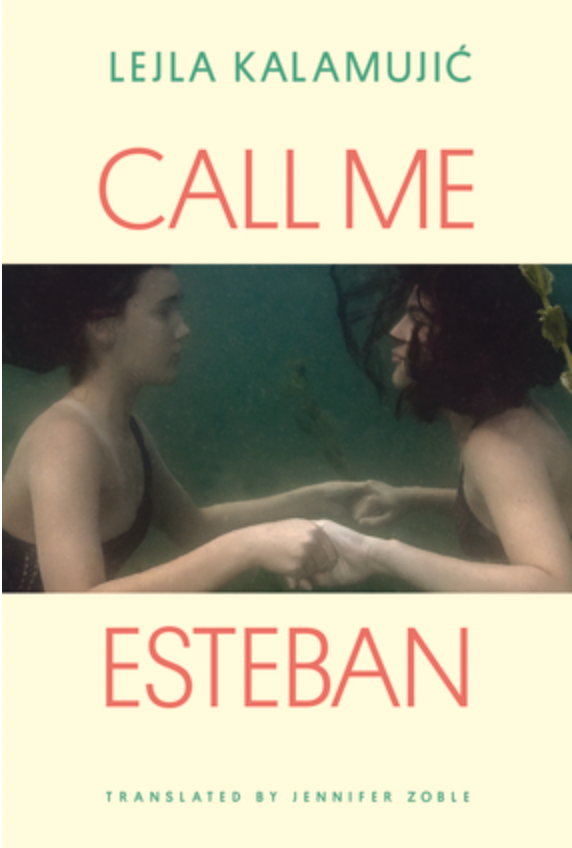 The following is excerpted from Lejla Kalamujić's new novel, Call Me Esteban, translated by Jennifer Zoble. Lejla Kalamujic is an award-winning queer writer from Bosnia and Herzegovina. Call Me Esteban received the Edo Budisa literary award in 2016 and it was the Bosnian-Herzegovinian nominee for the European Union Prize for Literature in the same year.

Their voices speak through their eyes. Young and old. Tender, pleasant. I could spread them on my body, like butter on a hot roll. With hot cheeks, I would lick their questions from open palms:

Who are you? Whose are you?

I, the golden one (as I was nicknamed), belonged to summer. In summer I was born. In summer my mother died. In that summer of life and death we were together: Grandma Brana, Grandpa Boro, Nana Safeta, Papa Nedžad, and me. Dad both was and wasn’t there. As one family, one house, in two places, in two different parts of town, we ate Nana’s pita and Grandma’s sarma, and both of my grandfathers drank beer and rakija. Our tenants were God and Tito.

I am of the summer! Summer, that’s me.

The voices laughed. Thick fingers pinched my cheeks until they turned red as copper. The tenants would appear here and there. First in Nana and Papa’s prayers, and then in Grandma and Grandpa’s Partisan songs.

And then the shooting began.

One half of the house—Grandma Brana, Grandpa Boro, and I—went to Grandma’s sister’s place in Šid. This was my first betrayal. I went with Grandma and Grandpa, leaving Nana and Papa behind. In this half of the house, which never stood firmly on the ground, we got a new tenant: War. He showed up continually: when we’d be eating, bathing, dealing with diarrhea or constipation. We also had waves. But not sea waves, not the kind that pull fish, shells, barges. These waves lived at the home of one Sreten. He was an older gentleman with a massive ham radio. We would go to his place on Saturdays, in sun, rain, and snow. Sreten would start up the radio, offering us homemade elderflower juice and three stools. We’d sit there and release our voices, rather than our bodies, to the waves. On good days we’d encounter the voices of Nana Safeta and Papa Nedžad; they’d tell us they were still alive and that this shit would blow over soon. I came to hate this half of the house, and our tenant. I imagined pulling his hair, poking him in the eyes, pouring salt in his nostrils. But I didn’t dare. He was too big and strong.

And then the shooting briefly stopped.

I left that half, and Grandma Brana and Grandpa Boro in it, and headed back to the other half of the house, where Nana Safeta and Papa Nedžad were. That was my second betrayal. In this half, things were bad. The truce lasted only a short time. Then shooting again. We didn’t have windows, only thick nylon sheets, and a stove called a sanduklija that merely farted rather than warming us. I would sit in my tiny room and write letters to Grandma Brana and Grandpa Boro on Red Cross message forms. And here too we had a tenant, and he too was called War. I didn’t know him well. I didn’t dare touch him. I just hid his socks and pants, and sometimes I would spit in his powdered eggs, in hopes he’d get the message and leave on his own.

And then autumn came.

Grenades falling. Nana Safeta and I sit by the farting stove. I cry. The waves bring a voice that says Grandpa Boro has died.

In his sleep. A tear falling from his eye. Nana Safeta sighs, which unnerves me deeply. Papa Nedžad enters, with a shy smile on his face and a copy of Oslobođenje in his hand. He sits beside the two of us and triumphantly turns the newspaper’s pages till just before the end. A short obituary, among many, of Grandpa Boro, and a picture of him.

Papa Nedžad says, “Never mind the shooting, I went out last night and got it in the paper, so everyone would know.”

Yes, Boro had died, somewhere far from the war—so it was whispered later around our half of the house. Yes, I say, Boro died, with a tear on his cheek, and I’d bet my life that he died thinking I didn’t love him anymore, because I’d left. My betrayal deepened.

And then spring came.

In our half of the house it was Nana Safeta, Papa Nedžad, and me. War had moved out, supposedly. A year before. But what a mess he left behind. You’ve never seen such a pig. We waited for Peace to move into our spare room. He was meant to come, but somehow didn’t. And we were counting on that rent. We needed it to live. I’d enrolled in high school. Life costs money. No sign of Peace, and Nana fell ill. The doctors said it was brain cancer, and gave her a month or two, at most. Everything was drifting away from me, as on a vast open sea. Now I hated this half of the house. I slept a lot.

One morning Nana Safeta, too weak to stand, calls out my name and asks me to come help her. I’m not quite awake: I hear her, yet I don’t hear her. Somehow I manage to rouse myself and stumble to her bed. She offers me her hand, like the feeble branch of an ancient tree. I tug and tug, but nothing. She’s heavy, too heavy. I tug a little more, then stop. I say: “I can’t.” I go back to bed. I fall asleep instantly. Nana Safeta died the next day. I became an even bigger traitor.

And then winter happened.

Ah, yes. I’ve almost forgotten to say that Peace had finally moved into our half of the house. That fraud. Totally friendly, full of words and smiles. And never a pfennig of rent. Always tomorrow, the day after tomorrow, just one more day. A real sleazebag. Papa Nedžad communicated with him; I avoided them both. Nedžad wanted us to talk. He even gave me permission to smoke in his presence when we drank coffee, as long as we were together. But I couldn’t be bothered. They got on my nerves: him, the house, and Peace. I’d begun studying philosophy at the university; that winter I listened to lectures on German classical idealism. I made fantastic charts summarizing the ideas of each philosopher. When I’d go for coffee with my friends, I’d carefully arrange my charts at the table, so we could trace each phase of being. At that time Grandma Brana moved her half of the house to Bijeljina. I guess some kind of Peace had come to her as well. But he was the same delinquent. She wrote me, called me. I didn’t reciprocate. Those fucking phases of being, with no free time. Grandma grew more ill. She was alone. One day the news came that she’d died.

We go to the funeral, Papa Nedžad and I. I’m so pissed off I don’t say a word. We walk to the grave. I’m first in line, immediately behind the casket. The procession is slow. I recall Sofka Nikolić, the superstar singer in the Kingdom of Yugoslavia. Sofka had a daughter, Marica, who contracted tuberculosis at an early age, poor thing. Sofka was never at her side: London, Paris, Vienna. The queen of the bohemian quarter, Skadarlija, garnered fame on all the world’s stages. Marica died. At seventeen. The story goes that this killed Sofka. She came here to Bijeljina, to bury Marica, to build her a big crypt. And she bought a house right by the cemetery, to be near her. She lived there for years, until she herself died. Now both of them are in the crypt, one beside the other.

As I walk behind my grandmother’s casket, I think about Sofka, and Marica, and everything else irks me, the crying people, and the sky, and the earth. I behave rudely. The cemetery workers lower Grandma Brana into the burial plot. An unpleasant silence. Everyone stares at me. Since I was the only person she had left, I’m supposed to be the first one to toss a clump of earth into her grave. Someone whispers to me that, if I really can’t, I can throw a flower instead. The grave is deep, cold, Decembrous. My mother, Brana’s daughter, died in summer. A summer long ago, in another city. I peer into the grave that’s claiming that half of the house and think about how stupid everyone is. Unforgivably stupid. What does it matter what falls first onto a casket of carved and sanded oak? Now, when it’s clear that Brana will not lie in the ground next to her daughter, who, I should add, was named after snow: Snežana.

Between one summer and one fall came Papa Nedžad’s turn. But he was really off his rocker, causing chaos all over the hospital. In the middle of the night he tore out his roommate’s catheter, assuring the man that he didn’t need it. He was senile; people in the hallway would beg me to take him home. To our half of the house, I mean. At the end the nurses had to strap him to his bed. With virtually no consciousness left, he thanked them profusely, then turned to me: “Bring me some scissors.” For two days he continued to breathe, but I knew he wasn’t there anymore. This time I witnessed it, which perhaps lessened my betrayal just a bit. I gazed at the tubes stuck in his emaciated body. Like roots that siphoned life irrevocably into the underground waters of death. I sat at his bedside while people passed by the room. At some point a doctor came and took his pulse, checked his tubes and monitor. Then she turned to me: “It won’t be much longer, an hour or two.”

That evening, on my way home from the hospital, I stopped at a bench in Veliki Park to smoke a cigarette. I wasn’t angry. It had been quite some time since I’d hated the people around me; now I just hated myself. I watched the others while they moved through their lives. They regarded me casually. I heard their voices inside me.

Who are you? Whose are you?

Betrayal is a dangerous condition. Hard to cure. I know this today, after years of more or less unsuccessful therapy. Today, summer is mine. And autumn is mine. God and Tito are mine. War is mine. And Peace. And winter and spring are mine. Everything is mine. Now that I have nothing left.

Excerpted from Call Me Esteban by Lejla Kalamujić, translated by Jennifer Zoble. Reprinted with permission of the publisher, Sandorf Passage. 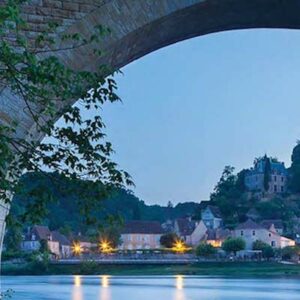 The Coldest Case by Martin Walker, Read by Robert Ian Mackenzie Every Monday through Friday, AudioFile’s editors recommend the best in audiobook listening. We keep our daily episodes...
© LitHub
Back to top