Via Icon Books
By Marianne Eloise

These were the first words out of my fiancé Karl’s mouth on the morning of December. My first thought: what could a man possibly do in his sleep that would warrant an apology on waking?

He said it the proper way, the Jewish way, the way she reminds us it is said in Eve’s Hollywood: Bahbich. Many forget. He, in reverence to both Eve and me, remembered.

I reacted as any of us with a parasocial relationship to an author might. First, I cried, my denial raw. “She was just getting started again,” I told myself. The Babitz revival that had begun in the latter half of the 2010s with newfound attention and reissues of her difficult-to-acquire works was gaining real steam. Her final collection, I Used to Be Charming, is dedicated in part to “all my fans, new and old. I am so glad to have found an audience to dance with.” I was just one of many.

Eve was not a great writer in spite of her unseriousness but because of it.

I left the house, alone, needing some time with a copy of Slow Days, Fast Company and the sun. I do not live in Southern California. I live in Brighton, a town in England that, if you squint, has some of the charm of it: a relaxed optimism rarely present in the rest of the country. On our best days, the only tangible difference is a stone beach, instead of sand; the paddleboarders, drifting on still water, replace surfers. (That, and the legal public drinking.)

On the day Eve Babitz died, deep in December, the beach wasn’t cold. It was unseasonably hot, so much so that I took off my coat and lay still. People strolled; some even brought out deckchairs. The temperature never climbed over 50, but the deceptive sun and our optimism let us enjoy a summer day. When the sun set at four, the gold disappearing against white buildings, I bought a bouquet and hid inside, thanking Eve for the brief respite.

Many people did not take Eve Babitz particularly seriously before the aforementioned renaissance, or even after. She was a party girl with heaving naturals and a litany of famous conquests that many obituaries made sure to mention. She was also a phenomenal writer, the kind people hate the most, the kind that doesn’t have to toil or sweat to turn out something that’s not only decent but often extraordinary. Eve was not a great writer in spite of her unseriousness but because of it. She wrote about the world and the times she lived in, but she was also embedded in them, never detached.

There is, though, one person who took Eve as seriously as she deserved: Joan Didion. Lili Anolik’s incredible 2019 biography-cum-obsessive-manifesto draws a line between the two that I had never considered: she claims that Joan “discovered” Eve by recommending her to an editor when she couldn’t take an assignment. (Though I take issue with the idea that anyone could ever “discover” a writer, in the way nobody can ever “discover” an inhabited country, I concede that maybe the Didion-Dunnes did help to legitimize Eve’s work in some eyes.)

I always see Joan and Eve as two sides of a coin, existing parallel to one another but never touching. I was wrong.

The two had an uneasy, distinctly female friendship that would have appeared to mimic a rivalry, were it ever truly a competition. The pair were friends, close, hanging out and having dinner parties until Eve’s addiction took hold and their bond was severed. A friend tells Anolik they believe “Joan got tired of dealing with Eve’s enfant-terrible actions and cut her off.” Eve says she “fired” Joan. The truth likely lies somewhere in the middle.

I always see Joan and Eve as two sides of a coin, existing parallel to one another but never touching. I was wrong.

Five days later, as if one could not exist without the other to taunt, Joan died.

Sitting in the car, scrolling mindlessly while Karl drove us to his parents’ for Christmas, I saw an unusually high number of people posting quotes, photos of Joan Didion smoking, gauche broken heart emojis. Then: confirmed by Griffin Dunn.

I re-read parts of The Year of Magical Thinking and the books by both Eve and Joan that I had brought on my three-day trip, not anticipating how much I’d need them—they kept following me.

In Slow Days, Fast Company, Babitz opines, “You can’t write a story about L.A. that doesn’t turn around in the middle or get lost.” It’s a kind of preemptive excuse for what’s to come: The beauty of her work is that it does get lost, turning back on itself with a playful energy that makes getting lost the point. But when writing a chapter in my own book on the city, I found myself lost in a way that was less fun, maybe because I am not an Eve. I am a Joan—I crave order, quiet, to make sense of the world and of the way I feel existing in it.

A lot of people have written about California, many very badly, and I didn’t want to join those ranks. But LA is a city that defies natural timelines, and I had to approach it differently—I had to look to Eve. I also looked to Joan. I took up in a hotel room for a few days with Eve’s Hollywood and South and West, hoping to be guided by women who weren’t yet ghosts. I built the essay around two warring perspectives on the state and the city at its heart: Eve’s, with all its optimism, and Joan’s, with her cynicism. When Eve writes sneeringly of work that sees LA as a wasteland, she’s almost jabbing her finger at Joan’s approach. Those two sides exist within me—a blind faith in LA’s promise and a desire to disappear into the desert and never again speak to an amateur screenwriter.

I am not an Eve. I am a Joan—I crave order, quiet, to make sense of the world and of the way I feel existing in it.

A month after Joan and Eve died, I returned to California, a place I have built a secret life, to chase their ghosts right back. I had to pay some homage, somehow, though the LA that both knew is long dead, buildings torn down, actors murdered, roads paved.

First, I went to Malibu. My first few days in LA had been very much so: drinking in Hollywood, a premiere at the Chinese theater, dinner on Melrose. With some drinks and a bikini I chose not to wear, we made the most of native daughters’ fears of any temperature under 80. We walked along Leo Carrillo, wind teasing, stepping over washed-up fish and driftwood. Seagulls pecked at our bags, but we had a spot that was harder to reach from both sides, the vantage point letting us know if anyone was coming. I ran into the sea and cartwheeled naked, the spring water too dangerous to swim properly but high enough to bash my anxious brain into submission. Malibu in “winter” offered me an ease nowhere else could. We walked for a while, sun setting, flat sand glittering pink.

It was only later, when rewatching the 2017 Joan Didion documentary The Center Will Not Hold, that I realized I’d walked just underneath Joan’s home, in her stretch of beach: her rickety steps, the ghost of the deck built by Harrison Ford, the laughter of those dinner parties. A friend says, “It was not the way you think of Malibu. It was very out there.” But it is the way I think of Malibu. It’s the only one I’ve ever known.

Later, I went to Hollywood Forever cemetery on a day so oppressively hot that sweat rolled down my back and cheeks despite it being February. No shade, nowhere to hide unless you’re dead. I knew that Eve’s parents, Mae and Sol Babitz, were interred there, so I searched for their small glass case. No luck. I wondered if they’d been moved, if Eve would join them in a bigger plot. I still don’t know. But in searching through the mausoleums, I found the cold that I needed, pressed against stone. I wasn’t going to find Eve—her spirit—in a glass case, anyway.

The truth, about humanity and California, lies somewhere in the middle.

My obsessive hunt stopped short of Anolik’s own, but I found both women wherever I looked. In The Last Bookstore in downtown LA, I bought a first edition of After Henry and A Book of Common Prayer, spotting a Post-It note reading “Joan Didion” stuck to the bookstore’s computer. Immediately after, I disappeared to the desert to hunt the snakes that haunted Joan. At a poolside in Palm Springs, a woman across from me read Slouching Towards Bethlehem. That much is not rare. On the other side, I saw a tan woman with short, dark hair and a wide-brim hat in a bikini that didn’t quite fit, a chest to rival Eve’s own. Spilling. She was confident, a spitting image of the photos of Eve on the phone looking caught off-guard. I felt comfort that a version of these women, in bikinis and old decks and cigarettes, continues to exist.

In the extensive acknowledgements of Eve’s Hollywood, Eve thanks “The Didion-Dunnes, for having to be who I’m not.” It’s more than a dry nod at two friends: it’s an admission of respect, of thanks, and an acknowledgement that they are different. She could not bear to be so career-headed and serious. Both women, to me, represent warring desires and intentions. Eve wants to show the best of LA, the reality of her most fun days. Joan, embedded in Hollywood but coolly distant in her writing, wants to show what she believes to be the truth. But the truth isn’t always the darkest reality.

When we compare them, we often disregard a simple fact: that we need them both. Lili Anolik makes the mistake of deciding who is better: for her, it’s Eve. She calls Play It as It Lays a “silly, shallow book,” one she believes Slow Days should replace in canon for women and men looking to understand LA. But when comparing Eve to Edie Sedgwick, she says they “were opposites in ways that only revealed their essential sameness.” The need to show California their way is Joan and Eve’s essential sameness. “In many ways writing is the act of saying I, of imposing oneself upon other people, of saying listen to me, see it my way, change your mind,” Didion said—Eve does that too, in her almost childish insistence that LA is not a wasteland.

Their extreme differences in perspective, though, are what makes them both essential. Forced to choose, unlike Anolik, I would choose Joan. But I don’t have to. I have them both, to be who I am not, and I search still for them. The truth, about humanity and California, lies somewhere in the middle. 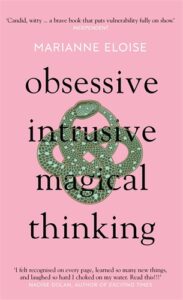 Marianne Eloise is a writer and journalist. She covers topics like TV, film, digital culture, neurodiversity, wellness and alternative music, for outlets including The Cut, the New York Times, Courier, Vulture, i-D, Guardian and more. 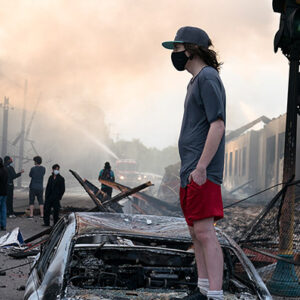 Why a Bloody End to Democracy in America Is Not Only Likely But Maybe Even Inevitable Hosted by Andrew Keen, Keen On features conversations with some of the world’s leading thinkers and writers about the economic,...
© LitHub
Back to top
Loading Comments...