C.P. Lesley and Charles Todd Talk Victorian Sleuths and the Toll of WWI

Writing novels—never mind entire series—takes determination, persistence, imagination, and craft. Charles Todd has added to those natural challenges the joys and complications of creating a single persona from a mother/son team. In A Cruel Deception (William Morrow, 2019), the eleventh in their beloved Bess Crawford series, the strengths of their long collaboration are on full display.

C. P. Lesley of the New Books Network talks to Charles Todd about their co-authored book A Cruel Deception which is part of their beloved Bess Crawford series. Join them as they talk about World War I, its effects on families across Britain and France, and the war-nurse and sleuth Bess Crawford who gets herself involved in extraordinary mysteries, unlike any other Victorian woman of her time.

C. P. Lesley: Tell us about Bess, who is Bess at the moment that we meet her in A Cruel Deception?

Charles Todd: She’s also English. She grew up wherever her father was posted because he was a career military officer, and much of the use was in India. It’s never . . . at that time, a really safe posting. So she learns early on how the army works, how to protect herself from danger, what duty and responsibility and the honor of the regiment mean. It was a very different upbringing and it was part of what prepared her be able to be—a word we hate—a “sleuth,” someone who gets involved in things that a Victorian young woman might never come across.

CPL: In this particular case, the war has officially ended and Bess is still nursing but she can envision the possibility of change and she’s not completely sure that she likes it.

Most of people at home didn’t know how their loved ones died. The army just said in their letters, that they died bravely.

Charles Todd: Well, Francesca in the Murder Stone was really a one book story. It didn’t lend itself to a series but it intrigued us because it showed this role that women took on in the war and we wanted to go into that. There was a character who was deeply involved both in the war and in the home front. Bess was well-suited to this; she is a woman who we find is a pleasure to write. And she has a sense of humor, that sense of duty, and then, from her nursing, a very clear objective view of what she’s getting into and what she has to get out of. She’s a very likeable character. I mean I really enjoyed her.

CPL: It’s hard for modern-day Americans to imagine how pervasive the effects of the war were, especially in France and Britain, where almost everybody had lost somebody—and you just mentioned the . . . and the wife have just lost their son—almost all the characters have lost close fiancés or brothers, husbands or fathers in the war.

Charles Todd: I remember specifically, we were in a small village in England and we walked into the bell tower in front of the church, and we were looking up at the names that had been carved into the walls of the sides of the bell tower and we were reading up, and even though, they were getting further away and it’s getting darker, if you go up higher, you can still tell that the names keep on going up. You noticed in that was, how many of them all had the same last name and it really brought home the fact that in such a brief period of time, all the men of military age and an entire family had been wiped out.

Caroline Todd: You think most wars nowadays, most of them are fought at distances, but on the first day of the Offensive, July 1st, there were 30,000 British casualties and there were so many wounded that the doctors had to go among them and decide, this one I can save, this man I must let go. And it must have been horrific. You see your best friend blown apart. You see someone whose leg or head is missing. This is such a traumatic experience. Most of people at home didn’t know how their loved ones died. The army just said in their letters, that they died bravely.

CPL: Normally at this point, I ask my guests what they’d like readers to take away from the novel and, it’s an open-ended question. Mostly, it gets at questions of theme or meaning but it can also be, you know, I just want them to have a good time. Does it apply, you think, to a mystery novel like A Cruel Deception?

Caroline Todd: There’s always a theme of some sort. We talk about an idea before we get into the writing but in this book particularly, a lot of people think that the armistice, on November 11th ended the war. It only ended the fighting. And so, in order to finish this arc of Bess as a battlefield nurse, it was important to remind people that it took them quite a long time to agree on all the terms of that. But also, the undercurrent in all of this, is that the war . . . reaching out and touching lives even years later and that those who actually survived it won’t be able to put it behind them. We’ve seen this in so many people whose families have served in the war. And one way or another, there is a very strong tendency to look back and to try to understand.

Charles Todd: A Cruel Deception is a story of the labor then. But it’s also about the tricks the mind plays in times of great horror or stress, and how that can whisk the truth, how one man’s mistake can trigger another man’s guilt. For us, it was a real challenge to tell this story. 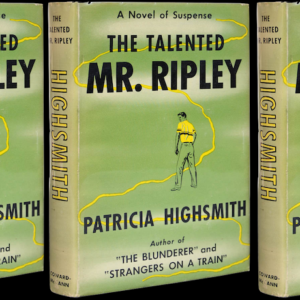 Of Bohumil Hrabal’s six great loves, guess how many were cats? (Hint: almost all of them.) | Lit Hub Memoir The...
© LitHub
Back to top