Building a Symbolic Wall of Oppression in the Middle of London

In March 2012, I visited Israel/Palestine for the first time, as part of a delegation sponsored by Amos Trust and the Greenbelt Festival. This trip, it seemed, would represent a great spiritual and cultural moment for me. From this small, bitterly contested patch of land in the Middle East, a cosmic narrative radiates across human history. Like Christians down the ages and across the world, I’d spent half a lifetime reading, studying and singing this narrative—and now I was poised to set foot on the hallowed stage myself. Jerusalem, Jericho, Nazareth, Galilee—every name is a referential trigger for a thousand hymns, paintings, and poems; every brick is laden with legends.

Like the most innocent of religious pilgrims, I experienced a kind of “Indiana Jones”-style mystical thrill as our plane began its descent to Tel Aviv. This is the place. I’m here at last. The land of the Bible stories, the land of Christ Himself. Would I find him here? On the Palm Sunday path down the Mount of Olives, in the Garden of Gethsemane or the Church of the Holy Sepulcher, or the grotto shrine of the Nativity Church amid the snow-clad, starlit hills of the “little town” of Bethlehem?

Well, no, of course. What we found in most of the holy sites was a kind of biblical theme park, staffed by heavily bearded, stressed-out Greek Orthodox monks policing thronging queues of tourists, pushing and shoving, each eagerly awaiting their holy location where X marks the spot. Quick prayer, quick photograph, buy a candle, on to the next miracle.

What we did encounter, on arriving at last in Bethlehem, was the Wall. The eight-meter high concrete, barbed-wire watchtower and search-camera monolith, symbol and fact of occupation and oppression, monument to despair. And my immediate, almost flippant reaction was to turn to my companions and say, “We should build the Wall in London. Then people would see what it’s like.”

The idea grew on me. How could one go about it? What would we need to pull it off? In the wake of the Occupy movement, the word from the inside of the Westminster village was that online petitions are all very well, but if you really want to make people sit up and take notice, you’ve got to get people out on the streets. So what would we need to bring the Bethlehem Wall to the notice of the public in the UK?

Well, it would have to be in central London—and at Christmas, because that’s the only time anyone ever thinks of Bethlehem. It would have to be on private property—we’d surely never get permission from Westminster Council. Ideally, it would need the collaboration of a supportive faith community with a vision for creative, radical projects. All the arrows were pointing towards St. James’s Piccadilly and their talented and inspiring rector, Lucy Winkett.

What we found in most of the holy sites was a kind of biblical theme park.

It so happened that she was chair of trustees for Amos Trust, she’d visited Israel/Palestine many times, and we’d collaborated successfully on a large, ambitious project ten years before at St. Paul’s Cathedral. So we met, and I asked her if I could build an eight-meter-high concrete Wall across her church courtyard for the whole of Christmas 2013. I expected her to laugh. I didn’t expect her to say yes.

Eight meters high and twenty-four meters across, with twenty tons of water ballast to weigh it down. How much would it cost? Don’t know. Did we have the money? Never mind. Think big and aim high.

With the visions still firmly under wraps, an astonishing artistic program was building around the putative Wall. Working in the theater world, I’m used to most people saying no, most of the time. But to my imaginary, secret, and unfunded Wall at St. James Piccadilly, the most amazing people kept saying yes. The legendary violinist Nigel Kennedy, comedians Jeremy Hardy and Mark Steel, performance poet Rafeef Ziadeh, superstar chefs Yotam Ottolenghi and Sami Tamimi, singers from the Tallis Scholars, film-makers Leila and Larissa Sansour: everybody loved the idea, its audacity and its simplicity. It was unnerving. What if we couldn’t get the funding? What if the council closed us down?

It was Lucy’s inspiration that the Wall in Piccadilly should be not only a provocative piece of public art, but also a festival of “Beautiful Resistance”—a term coined by Dr. Abdelfattah Abusrour, director of Alrowwad Culture & Arts Society in Aida Refugee Camp, Bethlehem. In this bleak, impoverished setting, right in the shadow of the Wall, among a cramped population living as refugees since 1948, Alrowwad teaches theater, dance, music, and photography to Palestinian teenagers as an expression of hope, to counter the daily humiliation and despair of the Occupation. “I don’t want to die for my country,” Abdelfattah told us. “I want to live for my country. As Palestinian refugees, we don’t have the luxury of despair. Instead, we choose beautiful resistance.”

Despite the magnitude of injustice heaped upon them, most Palestinians I’ve met prefer to celebrate life, love, laughter and hospitality. So, back in London, we decided to build a Christmas festival around our replica Wall—not just in solidarity with, but in celebration of Bethlehem today, because the reality of the Wall isn’t the only thing that people in the West can’t see and don’t understand.

Everywhere we went in Palestine, certainly we saw the oppression and suffering, but, springing up all around the checkpoints, concrete barriers, and razor wire fences, we also encountered communities of hope. People in the West can’t see, because they’re always looking at governments and official processes—just as most religious pilgrims, seeking an encounter with God in the Holy Land, look in the wrong places. “By all means, visit the holy sites, the dead stones,” said Nidal Abu Zuluf of the East Jerusalem YMCA, “but we’d prefer it if you come and visit us, the living stones, under Occupation, behind the Wall.”

“We are going through the Stations of the Cross, the via Dolorosa, on a daily basis,” said Dr Zoughbi, the charismatic director of Wi’am Conflict Transformation Centre in Bethlehem. “Every day we could be angry—legitimately!—but as the Israelis are destroying our lives, we are transforming them, turning the garbage of our anger and hate into the flower and tree of compassion.”

With the watchtowers and skunk water cannon of the Wall overlooking their playground, Wi’am works with Palestinian children to heal the trauma of the Occupation through art therapy and sports, runs women’s gender empowerment programs, and provides a safe space to local communities for conflict resolution. It is an astonishing community of hope.

“I don’t want to die for my country,” Abdelfattah told us. “I want to live for my country. As Palestinian refugees, we don’t have the luxury of despair. Instead, we choose beautiful resistance.”

No more do people see the remarkable example of Daoud Nassar, founder of the Tent of Nations, a sustainable eco-farm outside Bethlehem, besieged on a hilltop between louring settlements, which draws visitors and volunteers from all over the world, and brings Palestinian schoolchildren for breaks in green fields, because their land is their future, says Daoud. He has decided to use the near-impossible conditions imposed by the Occupation as a springboard for eco-innovation.

“We have no running water, so we’ve had to become very efficient in our use of rainwater,” he said, “recycling our ‘grey’ water to irrigate the crops. If we were to build any new structures, the Israelis would demolish them, so instead we have tunneled out caves in the hillside and are planning to build windmills on wheels. If it moves, it’s not a structure!”

Unusually, Daoud’s family has paperwork dating back to the Ottoman era demonstrating their ownership of the land, so they have proved extremely difficult to dislodge. They have been fighting a record-breaking 25-year legal action against the Israeli government to retain their land. Nevertheless, the occupying forces make regular and destructive incursions. The last time I visited Daoud, in 2014, the IDF had just bulldozed his entire food crop, claiming it was grown on land that didn’t belong to him. Daoud said, “You have to feel sorry for the people who did this. These acts they commit—they will follow them for the rest of their lives.” We refuse to be your enemy, proclaims the stone gatepost at the entrance to his farm.

Nor do people in the West hear nearly enough about the work of Jeff Halper, founder of the Israeli Committee Against House Demolitions. A Jewish Israeli activist for Palestinian rights, Jeff campaigns tirelessly on the issue that he considers to epitomize the cruelty and injustice of the Occupation: house demolitions. He and other Israeli activists place themselves regularly in front of the IDF bulldozers, and they organize house rebuilding projects with volunteers from the West.

“By all means, visit the holy sites, the dead stones,” said Nidal Abu Zuluf of the East Jerusalem YMCA, “but we’d prefer it if you come and visit us, the living stones, under Occupation, behind the Wall.”

Short, stout, and voluble, with a Father Christmas Beard and a broad New York drawl, Jeff is an infectiously engaging embodiment of “Beautiful Resistance.” He’s been arrested more times than he can remember, written several books, gives speaking tours all over the world and has picked up a Nobel Peace Prize nomination along the way.

Together with his Palestinian friend Salim Shawamreh, whose house had just been demolished for the fifth time, Jeff sat and ate with us in a chilly tent on the hillside of Anata, in East Jerusalem. Salim’s family made us welcome in their tent, and in breaking bread together we celebrated another community of hope.

And how I wish that more people around the world could hear the heart-stirring words of Sami Awad, founder of the Holy Land Trust in Bethlehem, whom I sometimes describe as a kind of Palestinian Gandhi. The following diary piece attempts to convey a sense of the impression he made on me at our first meeting. 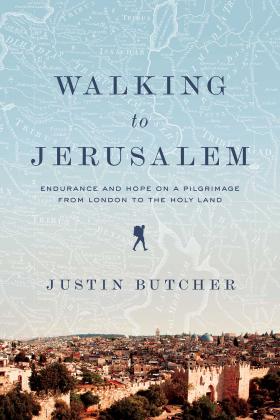 Justin Butcher’s Walking to Jerusalem is out now from Pegasus Books.

Justin Butcher is a writer, director, producer, actor and musician. He is the author of Walking in Jerusalem, as well as the award-winning solo play Scaramouche Jones, and the hit anti-war satire The Madness Of George Dubya and its sequels, A Weapons Inspector Calls and Guantanamo Baywatch. He is also the author of the acclaimed Go To Gaza, Drink The Sea, as well as five plays for BBC Radio 4. He holds BA and MA Honours degrees in Classics Greats from Oxford University. He lives in London.

Reading Women Discuss Indigenous Women Writers from Around the World 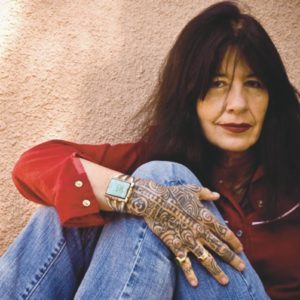 Reading Women Discuss Indigenous Women Writers from Around the World

To introduce Reading Women's theme this month, Kendra Winchester and Jaclyn Masters discuss books by and/or about Indigenous...
© LitHub
Back to top