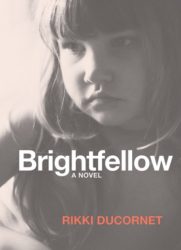 The following is from Rikki Ducornet's novel, Brightfellow. Ducornet is the author of nine novels as well as collections of short stories, essays, and poems. She has been a finalist for the National Book Critics Circle Award, honored twice by the Lannan Foundation, and been the recipient of an Academy Award in Literature. Ducornet is also a painter who exhibits internationally.

He is unlike other people. And the girl, too, unlike other people. Sometimes when he is crouching alone in the lilacs waiting for the moment to quicken, for the world to start over, it does. Suspended in the shadows, he sees her windows come to life and when this happens it is as if the first stars have caught fire and he is vividly alive, he embodies expectation, flush with longing for a look at the One Child, the One Girl: Asthma. Whose parents, Blackie and her Rod, have just left the house and in cocktail attire walk to Goldie’s front door and ring. In a moment they vanish as into a black hole. They will drink and drink. Propelled into a very great distance, time will stand still.

Asthma carries her supper to her room and considers her holdings: 110 animals (he has counted them) made of plastic, glass, wood—and one ivory elephant. They are provided with a restaurant that serves blue-plate specials, an amusement park constructed of shoe boxes, a castle with a moat, a movie theater (Italian. Made of printed cardboard and a gift from Noni). A mirror pond. An opera house, the Eiffel Tower, the Tower of Pisa (made of plaster), a locomotive.

The first time he saw Asthma she was in a tree. He had already seen Blackie, a hot machine made of rivets and spinning gears, like a pressure cooker and a robot combined. She was much like his own mother, always heating up and letting off steam. Asthma was better off in the tree than in the house.

Asthma’s father, a history professor, collects stamped postcards from Jamaica going back to the 1850s. His prizes include the King of Wings Penitentiary featuring a pink Cunard Line stamp, and the Jehovah God Bible School with three Jamaica Boy Scout stamps: pink, blue, and green.

It is unclear if he crouches among the lilacs to watch over Asthma or simply to watch her. If he could, he would join in her play. It is possible that he wishes to be her, wading deep into the fullness of the game. Upstairs framed in light, Asthma leans over her realm, moving things around. She is Ptah, brooding over the Egg of the World; she is Trimurti, her arms wheeling from within the lotus flower; she is Marduk, constructing a reed mat on the face of the waters, scattering dust, inventing gods and men— except that she plays with little glass horses, a plastic camel. He thinks Vanderloon would also appreciate this play of hers.

He burns as he watches her from below, the flickering, the firefly child, now you see her, now you don’t—careening like the smallest particle of matter, as restless as a thing can be, as a puppy, an angel dancing on a pin, as a dust mote swimming in the ocean of the eye: rabbit, fairy, human child: Asthma! Sprite, little daemon, his own talisman burning from his neck, burning within the iris of his eye.

It is hard to see her without entering into a certain . . . delirium. But he has always been vulnerable. He navigates his loneliness as if on a raft with a tattered sail.

His pockets rattle with wire scraps he uses to pick locks. In a storm he needs every muscle of his slender frame to hold his bucking world together. Sometimes the raft breaks beneath him and he comes close to a thing so terrifying that it has no name.

All around him people are living their lives. All those lives! Mammals barely evolved in houses with clean windows and solid oak doors. Their refrigerators stocked with boxed butter and beef, mustard and beer. Often the smell of baking wafts from a kitchen window. The lawns speak of tranquility and community. He knows the best kitchens. On a balmy evening he naps on a well-tended lawn listening to music from a phonograph, munching a fresh cookie, the music reedy and strange, or lovely, as it is tonight, something from a distant place and time beyond his knowledge or comprehension. The divine voices of the choir—angels or archons—tumbling through the air. The music nourishes him. It sweetens him with something like joy.

Once, the beautiful Dr. Ash, mathematician, stepped outside and stood on the grass alone in her bathrobe, fresh from a shower, her hair tumbling to her shoulders in grapes, and he kept still, on his back in the shadows, beneath a tree deep in leaf, so still she did not see that he was there. He heard her sigh and say aloud: Why am I so sad? It was a thing he had never thought to ask himself. He marveled at this. And ever after he would ask of himself: Why am I so sad?

It is impossible for him to imagine what it must be to live in a house as Dr. Ash does, full of quiet rooms, closets full of clothes, light summer linens and heavy woven wool; clothes for every season. Everything in the house warm and thick and heavy—as if each night it were basted in gravy.

These people, he thinks, live like the gods. Forever. Safe from the swift wheels of failure—and destitution.

He watches the stars. He imagines renaming them. Offering them to Asthma freshly minted, freshly imagined. The lost umbrella. The tin spoon. The little molecules. The peacock’s tail. The cherry basket. The falling tears. The wandering souls. The sandman. The lost soul. The turtle’s dilemma. The volcanic eruption. The kiss. Those who lament. The battling dogs. God’s beard. The snail. The tree of life. The outer garment. The boiling pot. The fishhook and the leviathan. The burning rushes. The victim. And those at the heart of the universe: a big black house on fire, the flames dancing in every window, smoke spilling from the cracks. The stolen chicken!

He had once stolen a freshly roasted chicken that had been left to cool on the kitchen counter. The family’s Labrador retriever was scolded and made to spend the night in an ignominious little doghouse he had outgrown years before. No one noticed the missing kitchen towel Stub had used to carry the chicken off, which became his plate, tablecloth, and napkin.

The memory of that chicken makes him aware of just how hungry he is, and he considers breaking his one rule and checking out Blackie’s larder. Asthma, after all, is busy at play, and Blackie and her Rod busy at drink. The little party is in full swing. He can hear Blackie telling Blondie about the book she is writing: The Boy Beamed to Mars. “A Boy Beamed to Mars is better,” Goldie offers; it’s more mysterious. Blackie puzzles this over. “I don’t see what a damned difference it makes,” she snaps, her blood pressure rising. “You have a tin ear,” Goldie says. “That’s why.” “If I had a tin ear,” Blackie hisses, “Brunelleschi would have told me. The Boy Beamed to Mars is exactly . . . it means he’s chosen, goddamnit. He’s the boy, not just any boy. Jesus.” “A boy is more mysterious,” Goldie insists, popping a maraschino cherry between her teeth. “He’s already floating in space. He’s anybody’s boy, not chosen by some dickhead divinity . . . but why do I give a shit?”

“Yeah,” Blackie agrees. “Why?” She stands, barely able to sustain herself. “WH Y DON’T YOU JUST . . . JUST NOT give a shit?” And she stomps off; the two men watch her leave without much interest.

When Blackie walks in the front door, Stub is standing at the foot of the stairs. “Who the hell?” she barks.

Wrong house.” Blackie says it vaguely as she weaves her way to the living room, shedding her heels as she goes. “Wrong house,” she mutters and falls, not onto the sofa as she intends, but onto the floor. Stub runs to her, asks her what he can do.

“The boy carries a burden of strangeness.” Goldie’s Rod says dreamily, prodding the ice in his glass with his tongue.

“Poor Timmy,” Goldie agrees. She wonders how Timmy, the son of the Distempers across the street, can possibly grow into a man. And yet he is fifteen, almost a man— such a worrisome thought. “Poor Timmy,” Goldie says again. “Fifteen and yet he moves along the ground like a crab.”

“Like a crab with an ancient woe and an oversized barnacle stuck to his claw,” her Rod agrees.

“When he walks about,” Blackie’s Rod wonders aloud, “I wonder where he goes?” “Where does such a boy go to find a little comfort?” Goldie ponders.

“Sauerbraten,” Goldie’s Rod says decisively, his nose probing the air around him. “The boy won’t starve.”

From BRIGHTFELLOW. Used with permission of Coffee House Press. Copyright © 2016 by Rikki Ducornet.

"Why Not Use This Moment to Celebrate Writers of Color?" 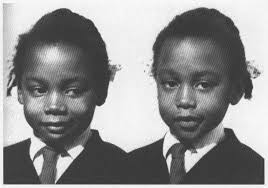 I Found a Rare Copy of June Allison Gibbons' Outsider Novel Shortly after I first began working at the British Library, I knew that I’d use my newfound access to 150 million media...
© LitHub
Back to top