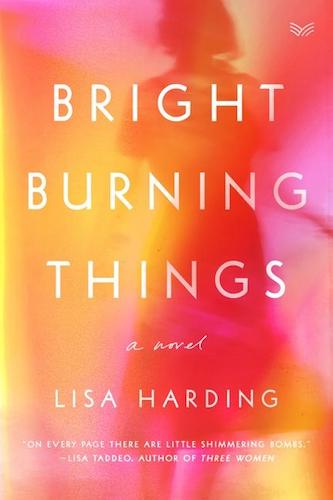 The following is excerpted from Lisa Harding's novel, Bright Burning Things. Harding is a writer, actress, playwright. She received an MPhil in creative writing from Trinity College Dublin in 2014. Her short stories have been published in The Dublin Review, The Bath Short Story Anthology, HeadStuff, and Winter Papers. Her first novel, Harvesting, won the 2018 Kate O'Brien Award and was shortlisted for an Irish Book Award and the Kerry Group Irish Novel of the Year Award. She lives in Dublin.

The windows are wide open and I’m naked except for the apron, no sign of another body in the bed. The clock says 9:10—what, morning already? The TV is blaring and the house stinks of burnt charcoal overlaid with bleach, making my hot, scratchy eyes water.

“Tommy? Tommy, darling?” I lie back on the pile of tussled pillows, exhausted by the effort, and stare out the window at the gray overhang of cloud. One day of sunshine is all I deserve. My body is heavy yet my brain is racing, careening against the inside of my skull. Need to get up, shower, get dressed, go to the supermarket, make lunch, tidy the mess from the beans, scrub the charcoal off the blackened walls, buy some polish, spray the house, maybe get a bunch of flowers, tulips, brightly colored, need to wash Tommy, clothe him, feed him, walk Herbie, find the lead—where’s the lead?—must pick up after him, need to remember to do that, bring the poo bags, get my son into the fresh air, make sure he eats. Close my eyes, drained by the effort of imagining the day’s activities. Everything feels parched: tongue, gums, lips, eyes, eyelids, fingertips. Will Tommy think to bring me in water?—he should know to do that by now.

When I wake again it’s a quarter past one in the afternoon. Push myself to sitting, look at the low, lumbering clouds, full and heavy like swollen cows’ udders. Nausea rises. “Tommy?” My voice skips and scratches. “Listen, Tommy . . . Mummy’s got her witch’s voice today!” No response and the TV is muted. Force myself to stand, the ground beneath my feet shifting—a whole-body seasickness.

The kitchen has been scrubbed, sparkling. Did I do all this last night, or this morning? When? My boys? Wait—“Tommy? Herbie? Tommy?” Breathe, Sonya, breathe, breathe, breathe. Pull on my jeans and a warm hoodie, fight the acid reflux by swallowing manically, fight the spins by holding on to any hard surface to hand. Keys? On the hook by the door. Another gem that Howard drummed into me. Slam the door behind me, the whole house shaking, and run to the green, adrenal glands in overdrive. There are three little children and a dad, someone I don’t recognize. “Excuse me, have you seen a big black dog and a little boy?” The man looks at me like all men ultimately look at me, like I’m a strange creature that’s just crawled out from under a rock: should he stamp on me or run? This man grabs his three children and herds them away. That’s right, run away, you always do in the end. Rain starts to gather in the heavy clouds overhead. An image of my boys, lost and scared, rises up and slams me, winding me with the force of it. Where else would they go? The beach? The shops? I run to the corner store. “Have you seen a little boy and a big black dog?” The boys behind the counter ke their heads, then snigger. “It’s not funny, you assholes, a little boy is missing . . .” They stop laughing. “Haven’t seen him, missus.” Run onto the main road searching for a flattened black coat, insides trailing, blood oozing, all worst-case scenarios playing out. “Herbie? Good boy, Herbie, good boy.” My voice is ripping from me. Herbie would never let anything happen to Tommy, as long as the stupid mutt hasn’t stepped out into oncoming traffic. Everything else he instinctively understands, except for that one kink, where he’ll see a car and barrel into its path. I run back to the park and perch on the swing, pushing it into motion with my feet, hearing Tommy’s voice in my ear: “High, higher, highest.” The movement helps offset the mounting sense of panic. Lift my face toward the sky, the lightly falling drizzle cooling my hot cheeks. How long has Tommy been missing? An hour, five? Who could I call? My father? The thought is swiped as soon as it surfaces. Howard? He’d say this was bound to happen. The guards?—but what kind of a backlash might come from a call like that?

My feet take off, slipping in my flip-flops on the wet tarmac as they run toward the house directly opposite ours, with its clipped hedge and planted borders, front door an innocuous brown, in keeping with the rest of the street. Why didn’t I think of this in the first place? I knock politely, three times, wait, then knock again and again, louder and louder, fuck propriety, until the door opens a crack. “Have you seen Tommy?” Mrs. O’Malley points behind her into the kitchen, where Tommy is sitting at a table, a book in front of him, Herbie at his feet. Rage rips through me. “Didn’t you stop to fucking think I might be worried?” Mrs. O’Malley pulls the door behind her and steps outside. “Not in front of the child. You didn’t get the note, then?”

Note or no note, how dare this woman go into my house and take my boys?

“Your front door was wide open this morning. You had me worried.”

Breathe, swallow, restraint. “Yes, I can see that.” I bring my thumbnail to my mouth and tear the quick with my teeth. Need to pull this back. “It won’t happen again. I’m sorry.” This last word visibly softens Mrs. O’Malley, who opens the door wider so Tommy is fully visible, so beautiful, lost in his own world, dunking biscuits and drinking milk. “Such great concentration.” She speaks low and nods in his direction. Have I missed something? “It’s the Encyclopaedia Britannica and he’s enamored with Australia and the marsupials.” Has she told him about bushfires burning them alive? And why is my son allowing himself to drink milk from another animal? Have I not told him often enough? Why have I not run to him and engulfed him in one of my hugs, squeezing the breath from him? Mrs. O’Malley gestures at me to come into the living room and sit on the rustling couch, which looks like it’s still wrapped in the plastic covering it was delivered in decades ago.

I nod solemnly like I’m giving this some consideration. Need to present some level of respectability and remorse.

“I had a migraine last night.”

“You certainly were out cold this morning.”

I blow on my scalded palm.

Mrs. O’Malley gets up to plump the pillow on the single armchair, then trails her fingertip over the mantelpiece, collecting imaginary dust. The room is dimly lit, various shades of brown, stifling, redolent with an old-lady smell of baby powder, stale potpourri.

“I’m happy to mind the boy and the dog for as long as you need. I have spaghetti bolognese for later.”

A crease on Mrs. O’Malley’s forehead actively furrows deeper, a worm making a groove in the center of her already deeply lined face. Smoker’s slits frame her thin mouth, which is outlined in a plum pencil, made to look bigger than it is. Powder is catching in all the ravines, her rouged cheeks giving her the appearance of one of my childhood Pierrot dolls, which used to come alive at night, dancing and whispering diabolical instructions that I could never quite remember the following morning, although a feeling of being complicit lingered. My father kept putting them back in their “proper place” on the shelf in my bedroom after finding them stuffed in pillowcases under the bed, facedown. He told me they were my friends and how could I do that to my friends?

“He told me you don’t let him have milk.” Mrs. O’Malley interrupts my musings.

“Cow’s milk? Disgusting. What mother in her right mind . . . ? The calves cry themselves hoarse.”

She flicks a crumb off her forearm. “What does he eat? He’s small, isn’t he?”

“I’m small,” I say, my voice anything but, as it bounces off the walls, amplified.

“Yaya?” Tommy comes hurtling into the room and throws himself into my arms, Herbie a pace behind him, his whole body wriggling from the force of his big tail walloping side to side. Mrs. O’Malley clears the tiny porcelain figurines within reach.

“Hey, I missed you guys. Don’t ever go anywhere without telling me again.”

The old bag butts in: “Sonya, you need help.”

A mist forms in front of my eyes. There is no anger, only a calm sense of purpose as I gather my boys and close the door behind me. I congratulate myself on not slamming it, on not losing it. My earlier use of the F-word won’t be forgotten, but then nor will my neighbor creeping into my house, breaking and entering, and stealing my son, yes, stealing him from under my roof when I was sleeping. 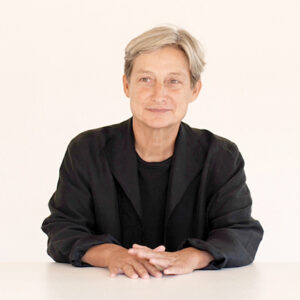 FSG will publish Judith Butler's first non-academic press book. As of yesterday, FSG has acquired Judith Butler’s new book, Who’s Afraid of Gender? This book will be Butler’s first...
© LitHub
Back to top