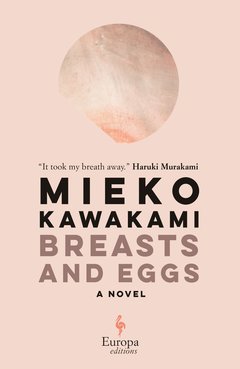 The following is from Mieko Kawakami's Breasts and Eggs. Kawakami's first novella My Ego, My Teeth, and the World, published in 2007, was nominated for the Akutagawa Prize and awarded the Tsubouchi Shoyo Prize for Young Emerging Writers. Kawakami is also the author of the novels Heaven and The Night Belongs to Lovers. She lives in Japan.

“I’ve been thinking about getting breast implants.”

It had been three months since Makiko had called me up to make this declaration.

Initially, she asked me what I thought and actually listened to what I said, but things changed as the calls became more frequent, up to three nights a week, and always at one in the morning, after Makiko got home from work. It became increasingly clear that she wasn’t looking for my opinion. She called me just to hear herself thinking out loud.

Her speeches had two refrains: “I’m gonna do it, I’m gonna get big boobs,” and “Can I really go through with this?”

In the ten years I had lived in Tokyo, Makiko had rarely called me in the middle of the night, and certainly never made a habit of it. I wasn’t ready for this. What was I supposed to say?

“Sure, why not,” I said without much thought when she brought it up the first time, expecting that to be the end of it. But saying “Sure, why not” opened the floodgates. It was a greenlight, and from there on out, I could barely get a word in edgewise. Meanwhile, Makiko gave me a first-class education on the state of breast augmentation surgery. Makiko explained the different costs, how and what would hurt, and all about the period of recovery that the clinics euphemized as “downtime.” Now and then, we’d wind up at a kind of chorus, where Makiko became her own motivational speaker. “I can do it. I’m really gonna do it.” Most of the time, though, she sounded like she was reading herself a list of all the information she’d gleaned over the course of the day.

Throughout these spirited updates, I tried remembering what Makiko’s breasts were like, but kept drawing a blank. Which I suppose is only natural, since it’s not like I can picture my own breasts, even though they’re stuck to me. Makiko could gush forever about the ins and outs of getting implants, and share her every thought and observation, but I couldn’t seem to connect Makiko with breasts, let alone breast augmentation. Listening to her talk, I felt something altogether separate from uneasiness or disinterest. I had to ask myself, “Whose breasts are we talking about right now, and why?”

Things between her and Midoriko were tense—as they had been for months. When Makiko fell into one of her “breast implant trances,” I tried to snap her out of it by bringing up her daughter. But if I asked, “Hey, how’s Midoriko?” she’d just say, “Yeah, she’s good,” in a voice that made it clear it was the last thing that she wanted to discuss.

You’d think that other things were on her mind. Makiko was going on forty. Where was her life taking her? How was she doing financially? What about her daughter? There were lots of other things she could have talked about, and all of them took precedence over the implants.

But who was I to judge? I’d moved to Tokyo so I could be alone, and I was single in the most literal way possible. I wasn’t a mother. I had no right to tell her how to raise her child. If anyone was worried about Midoriko, it was obviously her mom.

I wish that she had money. Or a normal day job, something more sustainable. But if Makiko had any other choice, she wouldn’t work nights at the bar or leave Midoriko alone. If she had it her way, she never would have let her daughter see her come home drunk, even if it was part of her job. She had no other prospects. Her only consolation was that she had close friends who would run over in a heartbeat if something ever happened.

But as bad as things were, I was honestly worried that things would get worse if they continued. Like working nights. As Midoriko got older, Makiko couldn’t keep leaving her alone at night like that. It wasn’t okay. Not by any stretch of the imagination. Things would have to change, and soon. But what else could she do?

Makiko had no skills, and it’s not like I could help her out, working minimum wage. Midoriko was still a kid, and kids cost money. We had no relatives to call for help, and zero chances of marrying into money. Less than zero. Lottery odds. But there was always welfare—

We’d talked about it once, just after my move to Tokyo. Makiko got dizzy and fell, we never found out why. For weeks we thought she might have something, I mean something serious. She had to take all kinds of tests, basically living at the hospital. It completely wiped her out. When she couldn’t make it into work, she lost her source of income. So we had to have a conversation about how to make ends meet for the foreseeable future.

“What about welfare?” I tried getting her to view this as an option, but Makiko wasn’t having it. She actually resented me for making the suggestion, and we wound up saying some pretty mean things to each other. Makiko had decided “going on welfare” was something to be ashamed of. She thought that welfare made you some kind of a parasite, who leeched off of the government and put a burden on society—convinced it somehow marred your human dignity.

I saw things differently. To me welfare was just money, plain and simple, and had nothing to do with shame or dignity. I asked her what the government was for, if not to help you out in times of need. When things got rough, you ought to step right up and exercise your rights. It’s called welfare for a reason.

But Makiko wasn’t buying it. In tears, she told me it would undo all the work she’d done thus far in life. She cried and said she’d never asked for handouts, just worked as hard as she could, morning, noon and night. I stopped trying to tell her otherwise. Her tests all came back negative, and thanks to the money the bar had floated her, in no time things were back to normal. But normal was a far cry from sustainable.

“This is the place I’m thinking of getting them done.” Makiko showed me the first brochure in the stack.

“Trust me, I made the rounds in Osaka, and talked with all the different clinics, but this place is my number one.”

I can’t even tell you how many brochures she had. All shapes and sizes. She must have had well over thirty. Makiko still didn’t own a computer. The thought of her locating all these different clinics without using the internet was so depressing I decided not to ask how she had done it. I held off on her top pick for the moment and flipped through some of the other brochures, more interested in all the clinics that had failed to meet her standards. Most of them had white girls with blonde hair on the front, wearing almost nothing, to give you an idea of what breasts looked like, and were embellished with pink ribbons or nice floral designs.

“I have my consultation tomorrow. Highlight of my summer. I brought these along to give you an idea of the process. I have way more back at home, but these were the best.”

Inside one of the brochures, I found a doctor in a white coat staring back at me, with a deranged smile on his face. Even scaled down to this size, his teeth looked eerily white. The words “Experience is everything” were written in big letters over his head. I must have been staring, because Makiko said, “Forget that, look at this,” and passed me the brochure for the clinic she had chosen.

“This is a clinic?” I asked. “Looks more like a luxury spa.” The brochure for her favorite place was glossy black, printed on thick card stock. It had something the other brochures lacked. You could say it looked expensive, but I thought it looked aggressive. The lettering was thick and gold. No trace of the cutesy, happy, undemanding purity normally found in ads for clinics geared toward average women. Its style evoked all the drama of the red-light district and those who make their living there. Breast augmentation surgery is no simple affair. A woman has all kinds of questions, so you’d expect a bit more levity, a gentler touch, a sense of understanding, even if it’s just for show. What would possess someone to go under the knife at a clinic with brochures that look like pamphlets for a VIP nightclub? My imagination got the better of me, but Makiko ignored my silence and went on.

“Like I told you on the phone, there are different ways to do it. Basically, though, you have three options. Remember?” I was about to say no, but forced a nod.

“First, there’s silicone. Then hyaluronic acid. Or they can take the fat from somewhere on your body and use that. Silicone’s definitely the most popular. You get the best results, too, but it’s also the most expensive. Here, this is silicone, see?” Makiko tapped her nails against the photographs of flesh-tone silicone arrayed on the obsidian paper.

“The pouches come in different kinds, too. This is what I wanted to show you. Every clinic says something a little different, which makes it hard to choose, but this is the big one, the top of the line. Silicone gel, 100%. They call the next one gummy bear implants. Anyway, this one’s a little bit more rigid than the gel type, so it’s more resistant to leakage, but even if it ruptures, it’s perfectly safe. It just looks a little hard. Some people think it looks unnatural. Then there’s saline. The best part about saline is that they don’t fill the bags until they’re inside, so they can make a smaller cut. But most people get silicone gel. It’s the future. So yeah, I’ve given it a lot of thought, and I want to go with silicone. This place is only 1,500,000 yen for both breasts. With general anesthetic, it’s just another 100,000.”

When she was finished, Makiko made this face like she was asking “Well?” and stared at me. At first, I just stared back, wondering why she was looking at me like that, but then I realized she had stopped so that I could share my thoughts. “Wow,” I said, trying to smile. She was still staring, so I added, “1,500,000 yen though? That’s a lot of money!” This wasn’t so much an opinion as a fact, but as soon as I’d said it, I worried that I’d said the wrong thing.

Excerpted from Breasts and Eggs by Mieko Kawakami. Translated from the Japanese by Sam Bett and David Boyd. Used with the permission of the publisher, Europa Editions. Copyright © 2020 by Europa Editions.

Michelle Obama was the world's 3rd highest-paid author in 2019. 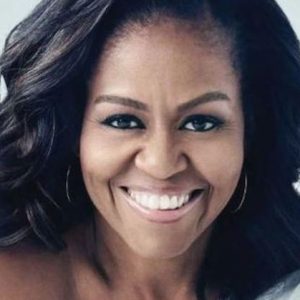 Michelle Obama was the world's 3rd highest-paid author in 2019. The Obamas are building a media empire, one that has already seen such immense success you would think they were Old Hollywood. Barack...
© LitHub
Back to top