This week on The Maris Review, Brandon Hobson joins Maris Kreizman to discuss his new book, The Removed, out now from Ecco Press.

*
On the questions that fueled the story:

Chekhov said fiction should begin with questions. So when I started writing this, I started with the question of how are people able to heal after such grief? I’d been reading a lot of articles about police violence against Natives, particularly Native teenagers and why are they getting killed. . . and not getting much media coverage. I was constantly asking myself, why isn’t this getting more national news coverage? And then the Native Lives movement started, but still it seemed to me that the news was blaming the deaths on mental illness, mental health issues in kids, rather than just police brutality.

*
On breaking stereotypes about foster kids:

I wanted to get away from the stereotype of foster kids being withdrawn or dark and brooding. Wyatt is a kid who comes in and he’s very animated. He does impersonations of Pee Wee Herman and Marlon Brando as the Godfather. He’s outgoing, which is the way that their son was. . . I wanted to make Wyatt a very lovable little guy who brings in his collection of records—Dean Martin and Big Band music—as if he was someone from the 1940s, wearing saddle shoes and who has taken dance lessons.

*
On incorporating some Lynchian surreality:

The Darkening Land was fun to write about as a fiction writer because I could create this otherworldly place however I wanted to create it. The Darkening Land is an actual place mentioned in some of the old Cherokee stories. I took that and created this place where Edgar goes. I wanted Edgar’s sections to be very surreal, to have a sort of David Lynch quality about them. It’s smoky and things are rotting and decaying, and the people are coughing smoke. . . His sections are very different. I’m aware that they’re weird, but I wanted them to be as surreal as they possibly could.

Brandon Hobson’s newest novel is called The Removed. He’s also the author of the novel Where the Dead Sit Talking, which was a finalist for the 2018 National Book Award for Fiction. He’s an enrolled citizen of the Cherokee Nation Tribe of Oklahoma.

On the Connection Between Chinese Folktales and American Comic Book Heroes 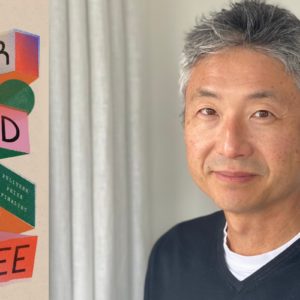 In this week’s episode of Fiction/Non/Fiction, co-hosts Whitney Terrell and V.V. Ganeshananthan are joined by award-winning...
© LitHub
Back to top