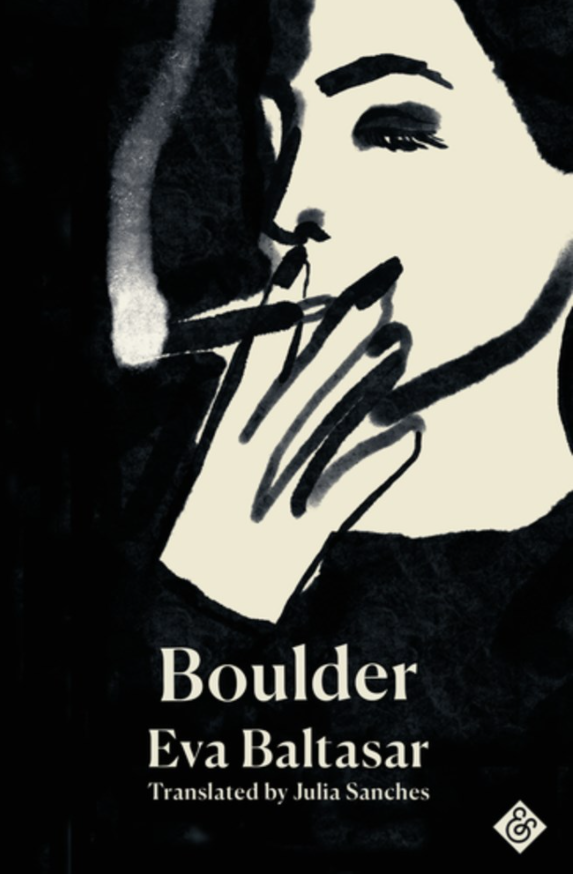 The following is from Eva Baltasar's Boulder. Baltasar has published ten volumes of poetry to widespread acclaim. Her debut novel, Permafrost, received the 2018 Premi Llibreter from Catalan booksellers and was shortlisted for France’s 2020 Prix Médicis for Best Foreign Book. The author lives a simple life with her wife and two daughters in a village near the mountains.

Quellón. Chiloé. A night years ago. Sometime after ten. No sky, no vegetation, no ocean. Only the wind, the hand that grabs at everything. There must be a dozen of us. A dozen souls. In a place like this, at a time like now, you can call a person a soul. The wharf is small and sloped. The island surrenders to the water in concrete blocks with a number of cleats bolted to them in a row. They look like the deformed heads of the colossal nails that pin the dock to the seabed. That’s all. I’m amazed at the islanders’ stillness. They sit scattered under the rain beside large objects the size of trunks. Swaddled in windproof plastic, they eat in silence with thermoses locked between their thighs. They wait. The rain pounds down as though cursing at them, runs along their hunched backs and forms rivulets that flow into the sea, the enormous mouth that never tires of swallowing, receiving. The cold feels peculiar. It’s possible I’ve drunk some of it myself, since I can feel it thrashing and bucking under my skin, and also deeper inside, in the arches between each organ. Impenetrable islanders. I’ve been here for three months, working as a cook at a couple of summer camps for teenagers. In the evenings I would cycle to town and drink aguardiente at the hostel bar. There were barely any women

It was a workers’ ritual. Stained teeth bared in greeting. The jet-black eyes of every family tree that’s managed to grow on this salty rock speak to me from their tables. They speak to me for all of the dead.

I’m not a chef, I’m just a mess-hall cook, capable and self-taught. The thing I most enjoy about my job is handling food while it’s still whole, when some part of it still speaks of its place in the world, its point of origin, the zone of exclusion that all creatures need in order to thrive. Water, earth, lungs. The perfect conditions for silence. Food comes to us wrapped in skin, and to prepare it you need a knife. If I’ve got one skill in the kitchen, it’s carving things up. The rest is hardly an art. Seasoning, tossing things together, applying heat . . . Your hands end up doing it all on their own. I’ve worked at schools, nursing homes, in a prison. Each job only lasts a few weeks, they slip away from me, spots of grease that I gradually scrub off. The last boss I had before coming to Chiloé tried to give me an explanation: the problem isn’t the food, it’s you. Kitchens require team effort. I’d have to find a really small one if I wanted to work on my own and still make a living.

The ship arrives at midnight. It barrels toward us at an alarming speed. Or at least that’s how it looks, because of the light glaring in the downpour, making us blink. There’s movement  behind us too; someone’s pulled up in a jeep and left the engine running. He calls us. The islanders rise. They look like enormous turtles hatched from a large egg. They plod through the rain, and as they pass me I feel like an insignificant foreigner, disease-white and sopping wet under my dark blue rain jacket. You’d need two of me to make one body as tough as theirs. But I was like them once, despite everything. I’d dug into the island with my nails and learned that the pulp of your fingers can harden, that the heart governs the body and shapes it according to its highest mandate: the will. We huddle around the driver’s door. I use my hood as a visor, rub my eyes, and try to make sense of what’s happening. Hands exchange coins, bills. From the car radio comes the sound of string music, as though in honor of the storm. I buy a ticket with pesos from my belt bag. The rest of my three months’ salary is wrapped in plastic, tucked between my undershirt and my skin.

It’s as if the sea itself has held out the gangway, as if the ocean has come to collect us. My backpack has me walking at an angle. I’ve got ropes in each fist and I let them lead the way. The yelling keeps us moving. As I board the ship I think it’s not actually that big, and then—silence. Human sounds are virtually imperceptible, here, beyond the reach of the elements. We walk sideways, with cautious steps, down a metal staircase. Behind a door is an empty hold. This is a freighter, not a cruise ship. We let ourselves fall inside as though we’d been adrift for years, and some of us exchange looks, possibly for the first time. The man next to me pulls out a bottle of pisco and takes a long swig. Then he passes it around. A pipe ceremony: we’ll see how it ends. I shrug off the rain jacket and my drenched sweater, then throw on a dry, dirty one I find after rooting blindly through my pack. I don’t know when we set sail. The hold rises and falls nonstop. Now and then we all slide to one side and the light bulb flickers until the sea surges again, sending us back to where we were before. An old woman passes me the bottle with a smile in each eye and a toothless grin. I take it and drink. I love this place, these narrow black eyes that neither desire me nor reject me, this fabulous freedom.

It’s what I came here looking for, true zero. I was tired of inventing résumés, of having to pretend life had a structure, as though there were a metal rod inside me keeping me upright and steady. The destination always kills the journey, and if we have to reduce life to a story, it can only be a bad one. What was I thinking, dropping everything for a three-month contract on the other side of the world? I’d just been fired from a restaurant in an industrial park. I used to hitchhike there every morning. Most of the time I was late, even though I gave myself two hours to make the trip. The best part of my day was when a car or van stopped on the side of the road, a hundred and fifty meters or so ahead, and summoned me with its blinkers. I’d run toward it like a lunatic, backpack on and jacket open, blowing out clouds of breath and cigarette smoke into the cold air. Some drivers were surprised when they saw I was a woman. Others didn’t even notice. Fifteen kilometers of peace, of being nowhere, of intruding on the commutes of kind people who had to suffer through them every single day. I often wished I could’ve jumped out of those cars while they were still moving, instead of having to say a polite goodbye and close their doors the way you might close the casket of a good friend, an inanimate body. What was I thinking, dropping everything? The devastating possibility of the same old job, of a tiny room in a suburban apartment, of lovers as fleeting as shooting stars, hot to the touch one day, a distant dream the next. The days came and went, unchanging, and every night I tossed them back one swig at a time, stretched out on my narrow bed with headphones in my ears and an ashtray on my chest. I’d gone through life fixated on an intangible conviction, tied down by the handful of things that kept me from becoming penniless, an outcast. I needed to face the emptiness, an emptiness I had dreamed of so often I’d turned it into a mast, a center of gravity to hold onto when life fell to pieces around me. I’d come from nothing, polluted, and yearned for windswept lands.

Melville House will publish a new book by Michael Cohen in October.

Dwyer Murphy on the Romantic Optimism in L.A. and South Florida Crime Novels 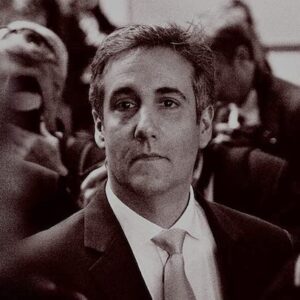 Melville House will publish a new book by Michael Cohen in October. In the confusing haze of time that is 2022, it seems like both yesterday and eons ago that former Trump attorney Michael...
© LitHub
Back to top