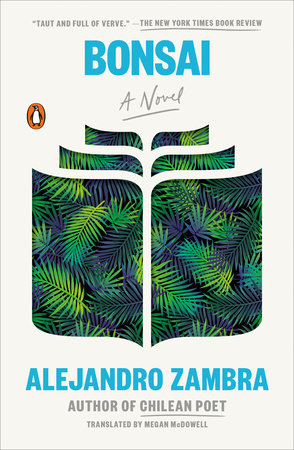 The following is from Alejandro Zambra's first novel Bonsai. Zambra is the award-winning author of the novels Chilean Poet, Ways of Going Home, The Private Lives of Trees, as well as two other works of fiction: Multiple Choice and My Documents. His short stories have been published in The New Yorker, The New York Times Magazine, The Paris Review, Granta, and Harper’s Magazine. Born in Santiago, Chile, Zambra lives in Mexico City.

Emilia’s first boyfriend—or “pololo,” as Chileans say—was clumsy, but there was something authentic in his clumsiness. He made a lot of mistakes and almost always knew how to recognize and fix them, but some mistakes are impossible to fix, and the clumsy guy, Emilia’s first, made one or two of these unforgivable mistakes. It’s not worth getting into what they were.

The two of them were both fifteen when they started dating, but when Emilia turned sixteen and seventeen the clumsy boyfriend remained fifteen. And so on: Emilia turned eighteen and nineteen and twenty-four, and he stayed fifteen; she turned twenty-seven, twenty-eight, and he was still fifteen, right up until Emilia turned thirty. Emilia didn’t celebrate any more birthdays after thirty, not because she started lying about her age, but because a few days after her thirtieth birthday, she aged no more, because, starting then, she was dead.

Emilia’s second boyfriend was too white. With him, she discovered hiking, bike rides, jogging, and yogurt. It was in particular a time of abundant yogurt, and this, for Emilia, was important, because she was just emerging from a period of abundant pisco, of long, convoluted nights of pisco with Coke and pisco with lemon and even pisco on its own, neat, no ice. They fooled around a lot but they never went all the way, because he was really white and that made Emilia distrust him, even though she herself was very white, almost completely white, albeit with short, very black hair, it’s true.

The third guy was really a jackass. From the start she knew the relationship was doomed to fail, but even so they lasted a year and a half, and he was her first sexual partner—her “first man”—when she was eighteen and he was twenty-two.

Between the third and the fourth there were several onetime dalliances that were largely motivated by boredom.

The fourth was Julio.

In accordance with a long-standing family tradition, Julio’s sexual initiation was outsourced, for the price of ten thousand pesos, to Isidora, “cousin Isidora,” who of course was not named Isidora and was not Julio’s cousin. All the men of the family had gone to Isidora, a still-young woman with miraculous hips and a certain propensity for romanticism, who agreed to service them even though she was no longer a hooker, not a real one: these days—and she always found a way to clarify this—she worked as a lawyer’s secretary.

Julio first met cousin Isidora when he was fifteen, and he went on meeting her over the following years, as a gift on special occasions, when he was insistent enough, or when his father’s cruelty waned and gave way to the inevitable period of fatherly repentance, and then to the period of fatherly guilt, whose happiest symptom was financial largesse. Needless to say, Julio was inclined to fall in love with Isidora, he cared about her, and she, fleetingly tender toward the bookish boy who dressed all in black, treated him better than her other patrons, pampered him; in a way, she educated him.

It wasn’t until he turned twenty that Julio started to approach women his own age with socio-sexual intentions; his success was limited, but still enough for him to decide to quit Isidora. To quit her, of course, the same way one quits smoking or betting on horse races. It wasn’t easy, but for some months before that second night with Emilia, Julio had considered himself free of vice.

That second night, then, Emilia competed with a single rival, though Julio never actually compared them, partly because there was no possible comparison and also because Emilia came to be, officially, the only love of his life, and Isidora merely a previous, agreeable source of fun and suffering. When Julio fell in love with Emilia, all the fun and all the suffering that came before the fun and suffering that Emilia brought him became mere imitations of true fun and true suffering.

The first lie Julio told Emilia was that he had read Marcel Proust. He didn’t usually lie about his reading, but that second night, when they both knew they were starting something, and that however long it lasted, this something was going to be important—that night, Julio deepened his voice, feigning intimacy, and said that, yes, he had read Proust when he was seventeen, during a summer in Quintero. By that time no one in his family summered in Quintero—not even Julio’s parents, who had met at El Durazno Beach, ever went to Quintero, a lovely beach town that according to them just wasn’t what it used to be, now that it had been overrun by the masses. Anyway, Julio said, at seventeen he had commandeered his grandparents’ summerhouse so he could shut himself in and read In Search of Lost Time. It was a lie, of course: he had gone to Quintero that summer, and he had read a lot, but he’d read Jack Kerouac, Heinrich Böll, Vladimir Nabokov, Truman Capote, and Enrique Lihn, not Marcel Proust.

That same night, Emilia lied to Julio for the first time, and the lie was, also, that she’d read Marcel Proust. At first she merely agreed: I read Proust too. But then there was a long, pregnant pause, which wasn’t an uncomfortable silence but rather an expectant one, so Emilia had to complete the story: I read it recently, just last year, it took me like five months, I was really busy, as you know, with classes. But I decided to read all seven volumes and those were truly the most important months of my life as a reader.

In Emilia and Julio’s story, in any event, there are more omissions than lies, and fewer omissions than truths, truths of the kind that are said to be absolute and tend to be uncomfortable. Over their time together, which wasn’t long but was long enough, they confided in each other their least public desires and aspirations, their disproportionate feelings, their brief and exaggerated life stories. Julio confessed to Emilia things that only his psychologist should have known, and Emilia, in turn, made Julio into a kind of retroactive accomplice to every one of the decisions she had made over the course of her life. The time, for example, at fourteen, when she’d decided to hate her mother: Julio listened attentively and offered the opinion that, yes, fourteen-year-old Emilia had made a good decision, no other decision had been possible, he would have done the same, and, certainly, if they’d been together back then, when they were fourteen, he definitely would have supported her.

Emilia and Julio’s was a relationship riddled with truths, with personal disclosures that quickly built up a complicity they strove to see as unassailable. This is, then, a light tale that becomes heavy. This is the story of two student enthusiasts of the truth, aficionados of deploying words that seem like truth, of smoking endless cigarettes, and of enclosing themselves within the violent complacency of those who believe themselves better and purer than others, than that immense and detestable group called everyone else.

They quickly learned to read the same way, to think similarly, and to hide their differences. Very soon they comprised a vain private world. For a time, at least, Julio and Emilia managed to meld into a single entity. They were, in short, happy. There can be no doubt about that. 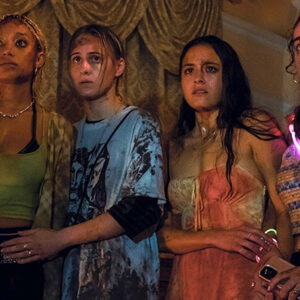