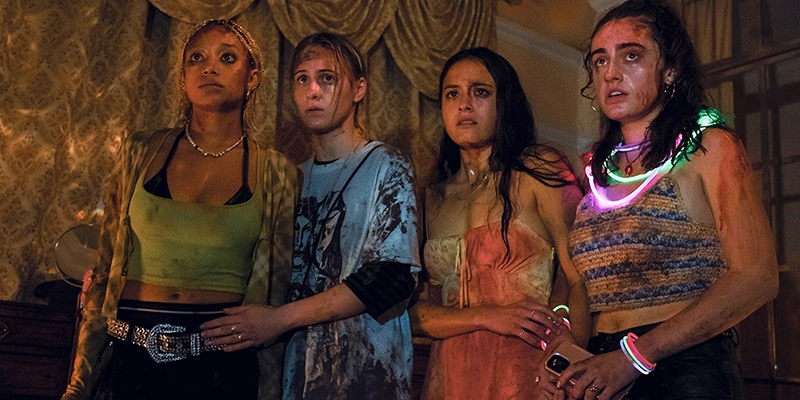 In Bodies Bodies Bodies, the new film from director Halina Reijn and writers Sarah DeLappe and Kristen Roupenian (of “Cat Person” fame), a group of mean, rich, and very high twentysomethings weather a storm in a huge mansion, believing one among them to be a killer after the lights go out and a party game goes awry.

When wealthy, newly sober Sophie (Amandla Steinberg) brings her new girlfriend Bee (Academy Award-nominee Maria Bakalova) to her friend’s manor house for a super-sleepover, not only are the party-attendees surprised to see Sophie and meet Bee (Sophie is briefly excoriated for not responding to their group chat), but they’re also dealing with their own petty frustrations.

Sophie’s best friend, David (Pete Davidson), is bored by his girlfriend Emma (Chase Sui Wonders) and jealous of Greg (Lee Pace), the strapping forty-year-old Tinder hookup brought along by Alice (Twitter personality Rachel Sennott). (Technically, though, everyone’s a little weirded out that Alice would bring Greg in the first place.) And Jordan (Myha’la Herrold) is clearly invested in challenging Sophie and Bee’s new relationship, seemingly interested in both of them. A friend named Max has evidently left the party already, after a personal confession of his had led to drama and conflict.

They are going to spend the impending hurricane together, literally and metaphorically. As soon as the rain begins to fall, the friends start doing shots and snorting lines and playing a vicious game, in which one person draws a card designating them “the killer” and must prey upon others in the dark. When a “body” is found, the lights go back on, and everyone must try to guess who the killer is, laboring to see who is lying about their activities. But, there’s a twist! Each round begins with taking shots and slapping someone in the face, as if the friends’ secret, pent-up hatreds and jealousies of one another were not clear enough already.

Anyway, it’s not long before there’s a blackout, cell phone service vanishes, and the game seems to become real. Is an unknown entity targeting the group? Has someone from the inner-circle finally lost it? Is Greg (the random, much larger adult male stranger who seems to want to hang out with girls a decade and a half younger than he is) menacing them all?

These self-absorbed, passive-aggressive, emotionally-stunted, over-medicated zoomers are quick to suspect and turn on one another, and do so in ways that offer copious satirization of the hyper-digitally-literate, fake-woke, pseudo-intellectual fashions of today

Less interesting than this answer is the vitriolic brutality that quickly mounts between the two-faced friends once the electricity and technology disappear. It makes you think, Are the kids so reliant on their devices and wifi that when they are no longer available, they go berserk? Or have they been so shaped into self-obsessed beings by technology that once it’s gone, they have no means to mediate their cruel indifference toward others? The performances in the film are all so convincing that you’ll worry you know some of these people and you’ll hope you’re never trapped in a house with them.

These self-absorbed, passive-aggressive, emotionally-stunted, over-medicated zoomers are quick to suspect and turn on one another, and do so in ways that offer copious satirization of the hyper-digitally-literate, fake-woke, pseudo-intellectual fashions of today (the kind of culture that co-opts and twists actual progressive ideas into meaningless pantomimes).

These people embody (to hypocritical perfection) the kinds of performative-progressiveness and influencery narcissism that are often found twisted in today’s zeitgeist. Perhaps this is no better exemplified than in the friends’ over-use of buzzwords in attempts to portray themselves as allies or victims or, really, both. I found myself smiling wryly when a character accuses another of gaslighting her, and another embarks on a tirade about how that word in that context doesn’t even make sense.

Bee, who brings a loaf of zucchini bread to thank the group for the invitation, is clearly the outsider here, the kind of rube we’re expecting to emerge as our Final Girl, if the film plays by slasher film rules. Socioeconomically but also interpersonally, Bee is out of her element. She works at “Game Hut” in the mall. She’s nervous when she accidentally consumes an edible. She ducks into corners to make phone calls to her mom. She is the foil to these people, a member of the generation who does not personify all of its ills. Bakalova (the breakout star of last year’s Borat sequel) deftly wields her character’s credulousness and shyness without making her seem the least bit helpless against the fuming, coked-up horde.

Shot in and around the darkness of the mansion, Bodies Bodies Bodies is also noteworthy for its excellent, understated cinematography—it’s not easy to make a film literally watchable (let alone visually interesting) when it’s illuminated mostly by harsh blue-white iPhone light and glowstick necklaces.

Generally, the film seems to both appeal to Gen-Z and its detractors by placing young people who embody the worst kind of societal discourse in a mansion together with lots of murder weapons. Watching it, I wondered if the movie would find itself compared to “Euphoria” or even “White Lotus,” or even—going back a ways—“Girls”; if its reception would dwell on its Gen-Z/very-online aura or even its Gen-Z/very-online cast and creators, or  if the movie would be specifically held up as some sort of model of the presumed dysfunction of the generation it represents. I hoped recognition of its crackerjack parodying wouldn’t obfuscate its clever genre machinations.

Bodies Bodies Bodies is a nice, nasty little game of a movie, using its modern hallmarks to illuminate the murder mystery and slasher genres, instead of simply the other way around.

The movie is also a proper whodunnit, a classic murder mystery, but it’s also definitely a slasher movie, and it places these two genres in conversation with one another so clearly that you might, at times, feel you were watching a version of And Then There Were None, the ur-text for this kind of thing. Indeed, murder mysteries and horror movie set-ups share much of the same real estate. Movies like James Whale’s The Old Dark House from 1932 or its Hammer Horror remake from 1963, or The House on Haunted Hill from 1953 or its 1999 remake are guilty of similar genre-melding.

Bodies Bodies Bodies is a nice, nasty little game of a movie, using its modern hallmarks to illuminate the murder mystery and slasher genres, instead of simply the other way around. The film gives its characters an outlet to really unleash their true feelings about one another, to sadistically play with one another, but this does not have to function as a commentary on Gen-Z as much as on humanity itself.

Putting terrible people in a bottle together and picking them off is the oldest trick in the book (or the movie). In fact, it’s a hallmark of Agatha Christie ensemble whodunnits that nearly everyone locked in together has something shady to hide, something to resent about someone else. Many are terrible, guilty of some past sin.

Oh, by the way, the kids call the party game they’re playing “Bodies Bodies Bodies,” but the quadragenarian/old millennial/maybe-even-Gen-x Greg knows the game by another name: “werewolf.” (For what it’s worth, I, nestled in between these generations as one of the youngest millennials, know the game as “mafia.” Except without the slapping. That’s new to me.) The more things seem to change, the more they stay the same. But there’s no real harm in that. 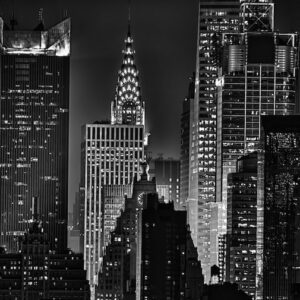 The following first appeared in Lit Hub’s The Craft of Writing newsletter—sign up here. You could go mad trying...
© LitHub
Back to top