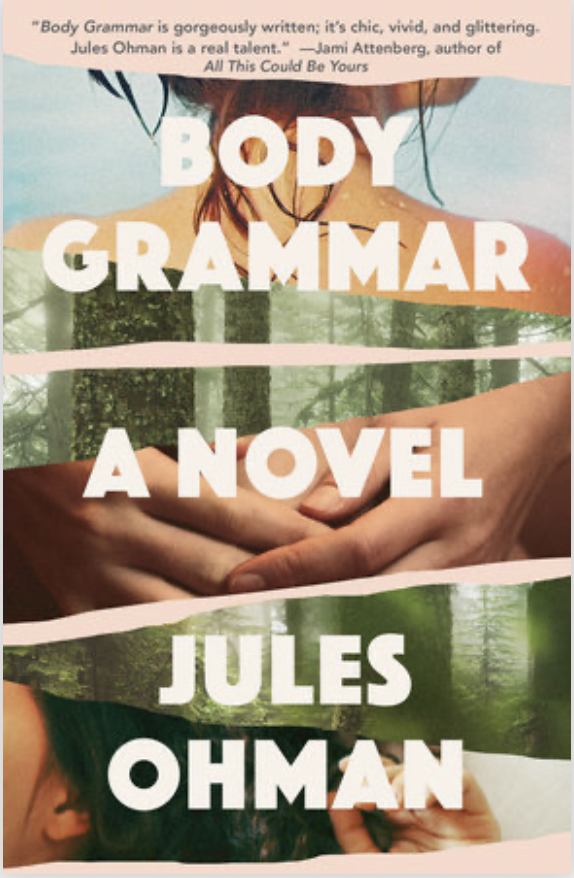 The following is from Jules Ohman's debut novel Body Grammar, a coming-of-age queer love story. Ohman received an MFA from the University of Montana and cofounded the nonprofit Free Verse. She coordinates Literary Arts’ Writers in the Schools program and lives in Portland, Oregon, with her wife

The morning after the show, they all sat around on the porch steps drinking coffee out of heavy mugs, the light sharp on the splintered boards and their bare thighs, everyone hungover except Tuck and Ivy, who couldn’t stop talking about the show and the buildup they’d created once the crowd actually started paying attention. Catherine kept going back in to throw up in the bathroom, and Lou felt like her own body was whirring in that same direction. She wanted to tell Catherine she was sorry for what had happened, but Catherine wouldn’t look at Lou long enough for even a reconciliatory smile. Lou was too afraid Catherine was going to confront her if she said anything directly and that Ivy would hear. She had no idea what to say to Ivy.

As the heat pushed everyone deeper and deeper onto the porch steps, Lou remembered a swimming hole their team had gone to after a state track meet. It was at the base of a waterfall.

The day had been dewy, emerald, cool. The shade had felt three-dimensional. She’d watched her teammates swim for hours, drinking beers and dunking one another in the icy water. Lou hadn’t gone in, but it had felt like the idea of a perfect day, and it was what she imagined whenever she thought about coming to U of O for school in the fall. The promise of a future easy and beautiful and familiar. For a second, it felt like they might still capture how it could be in September, with a group of friends and an empty day ahead.

When she mentioned the swimming hole to everyone on the porch, asking if they wanted to go, Morgan got excited, knew the waterfall too. Even Catherine was game, so they all piled into Ivy’s van and drove to the trailhead a few miles outside of the city.

By the time the forest shade on the trail opened up into a clearing of sun, illuminating a clear green pool, Lou had shed nearly every sticky layer. There was no one else there, just a smattering of crouching boulders, one of which Lou climbed up on to survey the landscape, camera around her neck. Down below, the others spread their towels on the rocky shore. Tuck and Catherine cracked beers. Ivy squinted up at Lou, hand over her eyes, and Lou took a photograph of the mossy canyon just behind her. She knew Ivy wanted to talk, but she didn’t know what to say.

After a while, Morgan and Ivy waded into the water, pushing and splashing each other, sandals still on. The bottom was visible until about ten feet out, where the flat stones, green through the lens of water, gave way to a deeper pool.

Lou descended the boulder to wade around the shallows with Catherine, who wasn’t being friendly but wasn’t totally ignoring her. Tuck lay on his towel with a textbook, studying for a final. Lou tried to ignore Ivy and Morgan and the great big fun time they were having near the waterfall, which cascaded off a ledge thirty feet up. The skin on her feet tightened in the icy water. It was as stunning as it had been the day her team had gone, still lush and green through her sunglasses, but her stomach knotted from something, the edge of her hangover descending in full.

The waterfall surged off granite walls of violent-lime moss and thick meandering vines into a dark and boiling punch bowl. Water flung itself heavy and fast from the walls. Ivy and Morgan were both waist-deep by the time they left the green water for the black. They were confident swimmers, heading toward the edge where there were smaller rocks to perch on.

Through her lens, Lou watched them pull themselves up, and zoomed in on Ivy in a black sports bra and running shorts, Morgan in a bikini. She slowed her shutter speed and took a few shots, the waterfall blurring white. She couldn’t hear them laughing anymore.

“Freezing!” Morgan shrieked, sounding farther away than she looked.

A few older people arrived together in the clearing and settled in front of a head-shaped boulder on the far end of the shore. Lou attempted to text her parents that she’d be home later, for dinner, but she didn’t have service. She lay down beside Tuck, resting her head on her camera bag, going through the photos from the show. She was so tired. When she glanced up again, smelling the weed wafting over from the other group, Ivy and Morgan were balanced at the top of the falls, on a rock that jutted out like a platform. Their laughs echoed over the water. Catherine wasn’t visible, maybe gone to pee, and Tuck was deep into a chapter about famous sociolinguists. Lou had no idea what those were.

The showing-off started with Ivy, strutting around as if she were on a runway, hands on her hips. Morgan mirrored her. It looked very beautiful, all of a sudden, the sun bright, their bodies bare. Lou focused her viewfinder on them, zooming in. She couldn’t hear their conversation over the sound of the falls.

She could see them turned toward each other. From this angle it looked like they were almost touching, and she thought, for one alarming second, that they were going to kiss. But then Ivy stepped back, took a running leap, and jumped. She gripped her knees in a cannonball and landed to the side of the rushing falls. Lou’s breath caught when she didn’t appear for a few seconds, but then she burst up gloriously, mouth open, wet black bangs in her eyes. She swam to the edge and made a gesture upward.

Morgan stood at the very edge of the rock, her hair so white it disappeared against the sun, and Lou took a picture of her. But when Lou looked back down at Ivy, she was still waving at Morgan, and it didn’t look like encouragement. It looked like a warning. Suddenly Lou’s heart was beating so quickly that it felt like she couldn’t catch her breath to get any words out—and anyway, she was always the one calling out to be cautious when no one ever listened.

The dive itself was perfect. Lou had never learned to dive properly, despite years of swim lessons, but when she had watched her teammates’ lazy dives from this exact same waterfall, she’d known their form was awkward, a little bent, inefficient. But Morgan’s arms made a precise arrow as her body shot toward the water. There was only a hiccup of a splash. Lou’s breath caught for those requisite seconds of a person’s body rising to the surface. She imagined Morgan reemerging as triumphant as Ivy. The wet blond hair, the smile. The gasp of air. She willed it.

But the pool revolved in the same pattern it had before, each lick of water returning to its place, as if Morgan had never gone under at all. Five seconds, then ten. Thirty.

It was Tuck who burst Lou’s silence. “Where did she go?” he said. So he had been watching too. Why hadn’t either of them said anything before she dived? Under his breath, “Morgan?”

Lou stood now. Ivy was already swimming out and under the falls.

“Come back!” Lou shouted to Ivy.

“Where the fuck did she go?”Tuck said.

Catherine reappeared from behind one of the boulders. “You guys?” Her voice so small.

Tuck looked at Lou. “Call nine-one-one,” he said. He darted around the rocks until he reached the deepest part of the pool and swam out to where Morgan had gone under, yelling at Ivy to get back to land, that she was turning blue. Two men from the other group followed him in and started ducking under the bulleting water.

It was Catherine who took off first, Lou fumbling for her and then Tuck’s phone, both still without service, sprinting down the trail barefoot and empty-handed. Lou chased her but Catherine was faster; that wasted athletic talent catapulted her around the next bend, and Lou was incapable of keeping up on the rocky trail. But what could she do but run on, the green shifting and shimmering like a kaleidoscope, until she finally reached Catherine, collapsed along the side of the road without shoes, while cars started pulling over for them and everyone but her was calling for help and Lou was quiet, so quiet, holding Catherine and telling her lie after lie. She’s fine, she’s fine. You’re fine. I’m fine. She’s fine.

The medics in the ambulance tended to their bloody feet, the gash in Catherine’s knee. There was less they could do for Catherine’s hysterical yelling of her sister’s name, over and over. Lou focused on the medic who was asking her questions as he extracted gravel from the sole of her left foot. His beard looked like her father’s.

She kept asking if he had talked to Tuck or Ivy, if Morgan had been playing a joke, maybe holding her breath for a really long time down there, or maybe she had passed out, but maybe Tuck or Ivy or one of the other men had gotten to her, pulled her up. She knew she was barely whispering, but the medic didn’t ask her to speak louder.

He asked how old she was, what her name was.

“Is that possible?” she asked the medic. “They could have pulled her up. That’s possible, right?”

When he didn’t answer, she could feel everything she’d consumed in the last twenty-four hours roiling in her gut. At the same moment she told the medic she was going to throw up, Catherine finally quieted and the ambulance stopped, turned off, and the doors opened to lights red and flashing, even when Lou closed her eyes.

Adapted from Body Grammar by Jules Ohman Copyright © 2022 by Julia Ohman. Published by arrangement with Vintage, an imprint of The Knopf Doubleday Group, a division of Penguin Random House LLC. 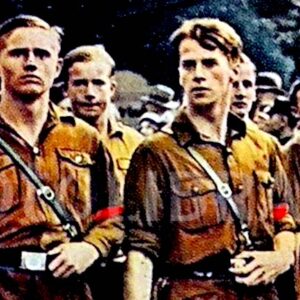 Here are the people publishing fascist, Nazi, white nationalist garbage with Amazon’s help. The Southern Poverty Law Center is reporting that Hatewatch has identified the principals behind Antelope Hill, a far right...
© LitHub
Back to top