This Nobel Prize Was Boringly Predictable

Bob Dylan has done it again. He has mischievously upended the verities, and stuck a guitar pick in the eye of Mr. Jones. Winning the Nobel is the latest of his predictable mischievous victories; he’s once more daringly done that which songwriters aren’t supposed to do. Another feather in the fedora; another laurel around the guitar neck; another triumph for America’s most predictably mercurial hero. It’s so surprising it barely feels like a surprise.

Dylan is different and exciting for the traditional, canonical reason that pop musicians in the US are viewed as different and exciting, from Elvis to Eminem. He’s a white, middle-class performer adopting a style associated with black people and poor people. Dylan, “created new poetic expressions within the great American song tradition,” the Nobel committee declared. He took the raw, authentic stuff of raw authentic people, and turned it into poetry that even literary scholars can appreciate. That’s what “genius” means when you talk about rock music—and literature too, apparently.

I’m not a fan of Dylan’s lyrics myself. Howlers like “She aches just like a woman/but she breaks like a little girl” are infamous, but even his more praised efforts sound to my ears like meandering doggerel—would-be profundities looking for a rhyme. “Blowin’ in the Wind” with its “how many roads must a man walk down” comes across as vague bathos compared to something like Big Bill Broonzy’s plainspoken, bitterly cheerful declaration, “If you was white, you’d be all right, if you’re brown, stick around, but if you’re black, get back, get back.” The apocalyptic “Hard Rain’s a Gonna Fall” is celebrated for its cascade of imagery. But is “I saw a black branch with blood that kept drippin'” especially vivid or original? To my ears at least it’s a lot less chilling than Lloyd Chandler’s haunting, direct apprehension of death:

I’ll close your eyes so you can’t see.
This very hour come and go with me.
Death I come to take the soul.
Leave the body and leave it cold.

To drop the flesh up off the frame.
Dirt and worm both have a claim.

For that matter, compare one of Dylan’s most offhand, least pretentious lyrics:

Buckets of rain
Buckets of tears
Got all of them buckets coming out of my ears
Buckets of moonbeams in my hand
You got all the love honey baby
I can stand.

I love the offhand whimsy and the hint of self-parody in the “buckets coming out of my ears.” But I still much prefer Chuck Berry.

I love the loopy renaming of the Venus de Milo to turn her into a contemporary character, the cliché of “world in the palm of her hand” turned into a joke because she doesn’t have any. And then the third line where the arms, just reattached, come off again in a struggle to land that brown-eyed man—who is also, maybe, a brown-skinned man, courting that old Greek statue so well she can’t help but to become his. Berry, who was Native American and African-American, takes that snooty Western white culture and makes it his, because his guitar sting is just that sexy, and just that smart.

The point here isn’t that Bob Dylan’s writing or music is terrible. Bob Dylan is often wonderful. But the Nobel Prize isn’t just saying he’s wonderful. It’s saying he is an apogee of American song; the one lyricist and performer deserving (so far) of the term “literature”. The Nobel crowns Dylan as a performer who has elevated his genre, and has used it in ways that have never been used before.

When you put Dylan next to Broonzy, or Chandler, or Berry, or, Cole Porter, or Joni Mitchell, or Andre 3000, that claim of clear superiority doesn’t hold up. You can love Dylan or hate Dylan, just as you can love Elvis or hate Elvis. But even if you love Elvis, it’s hard to argue that he was the King because he was somehow an exponentially more talented performer than Ike Turner, or LaVern Baker. Rather, he was the King because critics, and the public, see a white person reshaping black sources as a quintessence of creativity and cool.

In choosing Dylan, the Nobel committee cheekily subverted the usual canons of taste and literature. But Dylan as cheeky subversion is, unfortunately, its own tired trope. The power of Dylan, as an icon, is that he has smuggled the work of supposedly unsophisticated others into the hoity-toity bastion of high culture. In choosing him as the representative of American popular music, the Nobel committee shows the words of those outside the academy can be literature—when they’re spoken by the right people. Chuck Berry is still alive, but he won’t be going to Europe to sweep Milo de Venus off her feet. Instead, it’ll be that same old unexpected guy again. If you’re Dylan, they’re willin’. If you’re black, get back. 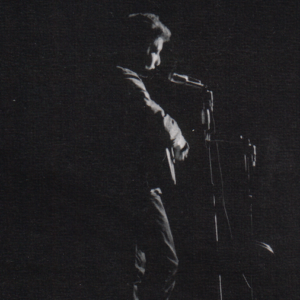 We might say that the subject of “Like a Rolling Stone” is words themselves, the language used by this Bone-ay-part in rags....
© LitHub
Back to top