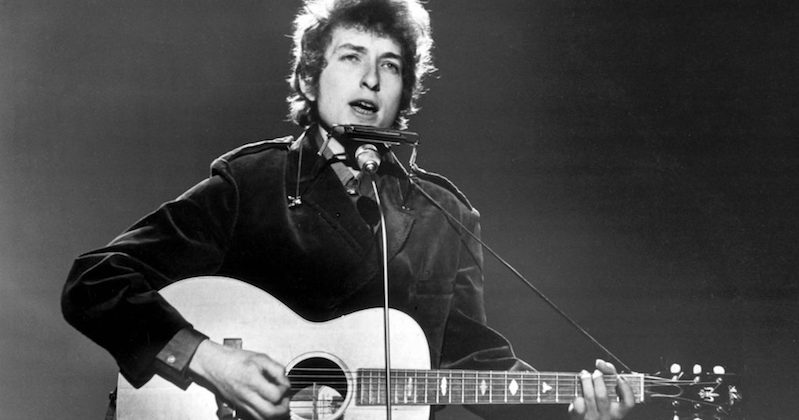 Feeling grateful and a little wistful the other day, listening to Bob Dylan’s “Simple Twist of Fate,” I hadn’t expected him to release a second previously unheard song less than a month after he dropped a 17-minute ballad about JFK.

But the world woke up this Friday to another pleasant surprise from, shall we say it again, the breezy Nobel laureate: a Whitman-esque tune aptly-titled “I Contain Multitudes.” (One can’t help but think of the thrilling 2007 cinematic riff on Dylan’s life, I’m Not There, and Cate Blanchett’s enigmatic turn as the singer).

Don’t let the slow thrumming on the slide guitar fool you; the song, though conventionally pensive for the bluesman-balladeer, is a fun one too. Dylan’s throaty vibratos inject melancholic lyrics with a bit of playfulness, making it sound as though he’s switching between various characters and moods—not a surprise given the name of the song.

The track has a couple well-placed literary allusions besides the nods to Walt Whitman’s Leaves of Grass. At one point the narrator confesses he’s “Got a tell-tale heart, like Mr. Poe / Got skeletons in the walls of people you know.” He reverses this sentiment a few stanzas down when he writes, “You greedy old wolf, I’ll show you my heart / But not all of it, only the hateful part.”

Adding a stray reference to one of the great Romantic painters and writers (“I sing the songs of experience like William Blake“), Dylan tops off his short ode to a mercurial man, equally capable of frank revelation and turns back to privacy.

In the spirit of finding my own sentimental meaning in the song, I took it as a reminder to those of us in our homes that, even when we’re stuck doing little to nothing, and when in spring “the flowers are dyin’ like all things do,” maybe, hopefully, we’ve become a bit more complex because of it.

It’s mid-April and I’m writing from Michigan, after all, waking up for the first time in a while to a scene of snow.