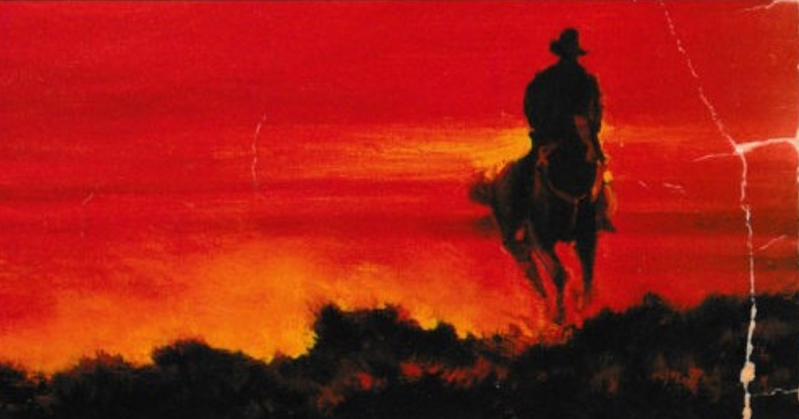 Blood Meridian or the Evening Redness in the West, the 20th century’s most cosmically terrifying work of literary fiction, celebrates its 36th publication anniversary this week.

McCarthy’s bloody, gnostic opus is the story of “the kid,” a battlesome teenage runaway who falls in with the Glanton gang—a notorious group of scalp-hunters who cut a murderous swath through the United States-Mexico borderlands in 1849, massacring Native Americans tribes, Mexican villagers, and anyone else who strays into their path. The dark heart of the gang is Judge Holden (“that grotesque patchwork of up-river Kurtz and Milton’s Satan”), a massive, hairless, amoral polymath whose loquacious fireside sermonizing belies a capacity for extreme, almost incomprehensible, violence and terror.

Though met with lukewarm reviews upon its release in 1985, Blood Meridian is now considered to be one of the great works of epic American literature, a feat of hypnotic linguistic verve and savage sensory detailing—Moby-Dick without the bouncy cetological asides and boardinghouse spooning.

Now I know there are people for whom Blood Meridian conjures up images of Eli Cash and his loosely-woven saddlecock, but I’ve always had a high tolerance for McCarthian prose. The more feverish or foreboding or obsolete the vernacular, the better.

Here, then, in no particular order, are what I consider to be Blood Meridian’s ten most McCarthian sentences.

1. “The sun was just down and to the west lay reefs of bloodred clouds up out of which rose little desert nighthawks like fugitives from some great fire at the earth’s end.”

2. “War was always here. Before man was, war waited for him. The ultimate trade awaiting its ultimate practitioner.”

3. “They were watching, out there past men’s knowing, where stars are drowning and whales ferry their vast souls through the black and seamless sea.”

4. “The truth about the world, he said, is that anything is possible. Had you not seen it all from birth and thereby bled it of its strangeness it would appear to you for what it is, a hat trick in a medicine show, a fevered dream, a trance bepopulate with chimeras having neither analogue nor precedent, an itinerant carnival, a migratory tentshow whose ultimate destination after many a pitch in a many a mudded field is unspeakable and calamitous beyond reckoning.”

5. “Only that man who has offered up himself entire to the blood of war, who has been to the floor of the pit and seen the horror in the round and learned at last that it speaks to his inmost heart, only that man can dance.”

6. “…war is the truest form of divination. It is the testing of one’s will and the will of another within that larger will which because it binds them is therefore forced to select. War is the ultimate game because war is at last a forcing of the unity of existence. War is god.”

7. “All night sheetlightning quaked sourceless to the west beyond the midnight thunderheads, making a bluish day of the distant desert, the mountains on the sudden skyline stark and black and livid like a land of some other order out there whose true geology was not stone but fear.”

8. “Stars were falling across the sky myriad and random, speeding along brief vectors from their origins in night to their destinies in dust and nothingness.”

9. “They rode on and the sun in the east flushed pale streaks of light and then a deeper run of color like blood seeping up in sudden reaches flaring planewise and where the earth drained up into the sky at the edge of creation the top of the sun rose out of nothing like the head of a great red phallus until it cleared the unseen rim and sat squat and pulsing and malevolent behind them.”