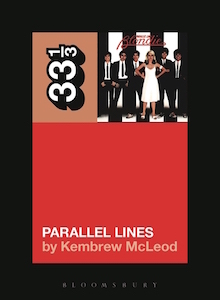 The following is from Kembrew McLeod's Blondie's Parallel Lines. Kembrew McLeod is a writer, filmmaker and professor at the University of Iowa. He has published several books and documentaries about music, popular culture and copyright law-including Pranksters and Freedom of Expression, which received the American Library Association's Oboler book award.

Parallel Lines’ first three singles—“Picture This,” “I’m Gonna Love You Too,” and “Hanging on the Telephone”—flopped in America, though they did chart in Australia, England, and other European countries. “In Europe, we’re selling really well—especially in Holland,” Stein said after the album’s release. “America’s a tougher nut to crack, even though that’s where we come from.”

After spending a million dollars buying out Blondie’s contract and seeing little return on its investment in the world’s largest record-buying market, Chrysalis viewed Parallel Lines as a failure. Blondie still had a fallback plan— “Heart of Glass”—though Clem Burke recalled that they felt it was more of an experimental track. As evidence, he noted that the song was buried on Parallel Lines (it was the fourth track on side two).

Radio was dominated at the time by the Album Oriented Rock (AOR) format, which influenced album track sequencing decisions. “You had to put your most promising songs first, second, third on an album,” Burke explained, “because the programming director would get an album, put his needle down, maybe listen to a minute of the first song. If he decided he liked that, he’d move on the second song, and then the third song. If he didn’t like what he heard, basically your album was not going to get played.”

Chris Stein felt that “Heart of Glass” did have hit potential, but had other reasons for holding it back. “I definitely thought it could do well as a single, but we delayed its release because we didn’t want the band to be tagged and dismissed with the disco label,” he said. “So I think it was the third or fourth single from the album.”

Blondie finally got its big break in America via television (which makes sense, given Debbie Harry’s charisma and the band’s attention to visual details). The group infiltrated millions of homes with their “Heart of Glass” music video and other live appearances on daytime, primetime, and late night shows.

At last, “Heart of Glass” began inching its way onto the Billboard Hot 100 singles chart, going number one on April 28, 1979. This long-awaited success was a double-edged sword, for it happened at the same time Blondie tried to cut its ties with manager Peter Leeds. “My experience with managers was absolutely nil,” Gary Valentine recalled, “but the minute I saw Leeds I knew I didn’t want to work with him. Unfortunately, neither Chris nor Debbie thought much of my misgivings, much to their later regret.”

The couple discovered that Leeds had designs to turn Harry into a slinky solo star, and had a habit of terrorizing some of the boys in the band by telling them they were expendable. “I would say on the record that Leeds never said that to me,” recalled Clem Burke. “All he ever said was that we will be a big success and that I should stick with it.”

From Burke’s point of view, you just need thick skin if you want to be a pop star. “I guess I’m a big masochist,” he said. “I do enjoy suffering. It’s one of my favorite things. So to be in the music business, I’m in the right place.”

The last straw was Leeds’ handling of the Parallel Lines album cover. At the end of the photo session, Leeds suggested to the reluctant band that they take one picture with the guys smiling, while Debbie Harry scowled. He then used it for the cover in spite of the band’s objections. “I just hated that posed album cover,” Jimmy Destri said. “It looked like it was designed by management and put together by marketing and it was just awful.”

“I really don’t like the way my hair looks because it was kind of like cut out, or cropped,” Burke said. “They took the original photos and pasted them together, so you can see how they cut around the heads and things like that. … But it’s fine. It became ‘iconic.’ But I think the part with Debbie frowning and us smiling, I don’t know,” he sighed. “I don’t get it. It was fine. It was sort of a bubblegum-looking cover.” (However, Burke does take credit for the back cover image that featured the band members’ shoes, from stylish boots to Converse high tops.)

Blondie’s old friend and collaborator Stephen Sprouse created an alternate Parallel Lines album cover that ended up not being used. “He made the t-shirts—the shirts that we wear in the ‘Heart of Glass’ video—and the dress that Debbie wears,” Burke said. “He incorporated the concept of lines in a different way, in a much more artistic way, a little more abstract way, using the scan lines from the TV. Whereas the actual cover was just these big black and white parallel lines, like, more literally.”

“It was a much more artistic statement and of much more historical value in retrospect,” Burke added. Fed up with the record cover fiasco and other accumulated resentments, Blondie pushed to get out of their contract with Leeds. Unfortunately, they were dealing with an industry player who knew how to play hardball. Whenever a new single raced up the charts, the buyout price went up until their former manager walked away with a healthy share of the band’s future royalties.

Leeds was financially set for life, earning more money than the members of Blondie ever would. “Everybody thinks we’re millionaires but royalties take a long time to come through. When you come to New York you can see our spacious penthouse apartment,” Chris Stein sarcastically told a reporter in 1980. “You can see the peeling paint with the leaking roof and the mold on the walls,” Harry added, “but we love it, it’s home!”

The week “Heart of Glass” was the number one single in America, their friend Glenn O’Brien recalled loaning Stein fifty bucks. It was about as far away as one could get from Lifestyles of the Rich and Famous, MTV Cribs, or the standard-bearer of late 1970s glamor, Studio 54.

From BLONDIE’S PARALLEL LINES. Used with permission of Bloomsbury. Copyright © 2016 by Kembrew McLeod.

Once Upon a Time in Berlin 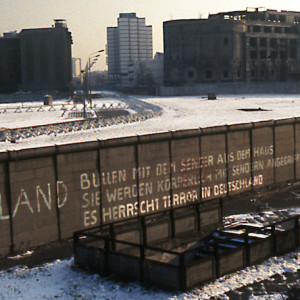 Once Upon a Time in Berlin Rob Spillman's memoir, All Tomorrow's Parties (Grove, April 5th), is, among other things, a compelling look back at a newly...
© LitHub
Back to top