Black Mirror to be a Book, Shakespeare to be a Punk

This week in film and television news was all about the video (baby?). We got casting tidbits here and there, a few adaptation updates, and one bit of highly unusual news for this section—namely that one of your favorite original television shows will soon be one (or three) of your favorite original novellas—but the real entertainment was in the trailers and parodies (I couldn’t bring myself to actually include this one, because it’s so ludicrous, but know that it’s happening). There’s a literary adaptation video here for your every mood: weepy, weird, and caustic about the state of America today. Those are the only moods, right? I thought so. Read on.

In a shocking reverse-news situation, it looks like Black Mirror is going to be adapted into “high-tech ‘paper’ format” form. Creator Charlie Brooker has signed on to edit three novellas, each one to be written by a different author, the first hitting shelves in 2018. The stories will be original, so seems like he could have just edited some novellas without selling them as TV spinoffs, but maybe it’s a brilliant marketing ploy? Either way, they’ll probably be worth a read.

Judy Greer has signed on to play Dr. Kurtz in Richard Linklater’s adaptation of Maria Semple‘s Where’d You Go, Bernadette. Which, perfect.

Vincent Piazza has joined the cast of The Passage, Fox’s TV adaptation of Justin Cronin‘s novel of the same name, which is set to film this summer. Mark-Paul Gosselaar is also in this adaptation, in case you were interested in what Zack is up to lately.

French writer and illustrator Penelope Bagieu‘s graphic novel Brazen, an encyclopedia of sorts of “rebel ladies who rocked the world,” is becoming a television series, to be produced by French companies Agat films & Cie and Silex Films. “Through these portraits, we’ll chart the battles and achievements of these women who have gone mostly unnoticed even though they deserve to be hailed as heroes and role models,” producer Judith Nora said in a statement. It seems like the show will take a novel format (no pun intended, except pun intended a little): the 30 episodes have been described as “mini-biopics” of three minutes each.

Jason O’Mara has joined the cast of The Man in the High Castle—based on Philip K. Dick‘s novel of the same name—as a regular for its third season. According to Deadline, he “will play the rugged Wyatt Price, a new male lead character opposite Alexa Davalos, Rupert Evans and Rufus Sewell. Fleeing the war in Europe, Price’s family immigrated to New York from Ireland as refugees, then fled west again ahead of the Nazi invasion. Like most in the Neutral Zone, he’s learned to survive as a hustler, trading in various black market goods and services. But he’s more than just a survivor—he believes in what America was and what the Neutral Zone still is—a melting pot worth saving.”

The domestic theatrical rights to They Remain, Philip Gelatt’s adaptation of a 2010 short story by Laird Barron, starring William Jackson Harper and Rebecca Henderson, have been sold to Paladin. Of the film, Paladin’s Mark Urban said, “I can’t remember when I last encountered a film that so completely defies categorization and so consistently forges new territory as They Remain. Phil weaves such a potent spell, and creates such extraordinary images, you’re utterly convinced that, any second, something awful will happen.”

A film adaptation of Francisco Goldman‘s 2011 autobiographical novel Say Her Name is in the works, with Leena Yadav to direct from a script by Scott B. Smith. “This is a beautiful and deeply romantic cross-cultural love story, and a suspenseful drama of life and death, all at the same time,” said producer William Horberg in a statement. Horberg has a history of top-notch literary adaptation credits (The Kite Runner, The Talented Mr. Ripley, Cold Mountain), so I have high hopes for this one.

And now for our visual section. This isn’t really literary film or television news, but Funny or Die created this parody of The Handmaid’s Tale, entitled The Handman’s Tale, in which the feminazis demand to be treated like people at the expense of men’s rights to talk about their tits, and it did make me laugh at my desk. I bet Margaret Atwood laughed too.

Next, wasn’t William Shakespeare‘s life just so crazy, and also perhaps sexy, and also maybe cool? Well, so suggests the official trailer for TNT’s Will, about the time “when theatre was like rock and roll and a young man with a dream changed the world with his words.” Cool, I guess!

The Joy and Preemptive Grief of Fatherhood 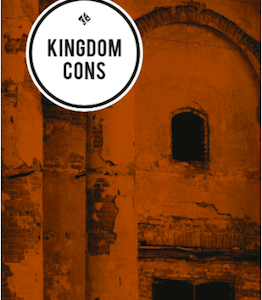 Dust and sun. Silence. A sorry house where no one exchanged words. His parents a couple of strays who got lost in the same...
© LitHub
Back to top