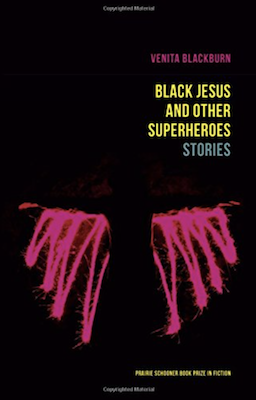 The following is from Venita Blackburn’s collection of stories, Black Jesus and Other Superheroes, which follows ordinary people achieving extrasensory perception. The stories chronicle those who are burdened with undesirable superhuman abilities, but are resilient. Venita Blackburn teaches English at Arizona State University. Her stories have appeared in American Short Fiction, Faultline, and elsewhere.

After school I arrived at home, took off my shoes at the door, kissed the 8×10 photo of black Jesus in the hall, ate Froot Loops over the sink so Nana wouldn’t scream if I spilled milk on the carpet, and then watched tv. I used to watch this cartoon with beasts that turned to stone in the daytime and came alive at night. This was my ritual, my afternoon ceremony of duty, love, and magic. The previous Christmas my Nana came to live with us, my mother and me. In Los Angeles Christmas can be deceiving, but I loved it anyway. I dreamt of cotton snow and the oily smell of plastic holly. Authenticity never made much sense really. All that is real is what is in front of us, if the satisfaction is absolute. Aluminum icicles over the porch satisfied me deeply. Nana, not so much. I killed her, so she says, but she says everything killed her even though she’s as alive as a dog bite.

Nana was smaller than me even then, a granddaughter of slaves, and knew life without electricity and frozen waffles. She knew other things too, especially about cows, not just milking them, I’d done that at the L.A. County Fair; she could deliver their babies and cure their sicknesses. When Nana first entered the house she had nothing but her long strapped leather purse, a brick-thick Bible, and that photo of the darkest Christ I’d ever seen. She didn’t have a suitcase or anything. I asked my mother, “Why did Nana have to come?” She said, “Your grandmother lived with my sister, and now she lives with us.” That was that. “Mama” really is God in the mouth of a child. To her I often prayed on bent knees in the kitchen with knuckles under my chin, “Please, please can I have money for the ice cream truck?” The delicious music of sweet, dairy bliss grew louder. She told me she’d given me enough change the day before, which was true, but I denied it. I pleaded. “No,” she said, “I don’t want you buying anything from that musky albino.” God stirred her pot, and the song passed. When Nana caught me prostrate on the floor, she pulled me up and told me to honor my mother.

Nana and I spent a lot of time together while my mother worked. Well, I spent a lot of time with Nana’s rules. One morning she caught me kissing the photo of black Jesus on my way to the bus stop. With her wet, bony palm she slapped me downward on the left temple. I didn’t know that much pain existed in all the world. She cursed me dizzy with words I didn’t know yet. Then she sat me down and read the Ten Commandments to me in more words I didn’t know. I did understand that there were primarily just ten, just ten laws not to be broken. That finite sensibility meant everything to me. I may not have made it through the school day without that number, having been poked with such an emotional ice pick as only my Nana could.

In class I stared at my teacher and wondered. Electricity crackled in my blood and out my ears. She had skin like fabric, a suede eel with really great breasts. Then I knew what I had to do. When I got home I found Nana’s mammoth Bible and turned to the book of Exodus and skimmed the commandments. I had to choose one, so I picked “thou shalt not bear false witness against thy neighbor.” My Wite-Out pen in hand, I blotted out that commandment and taped another over it: “Thou shalt not kiss black Jesus.” It was specific. I was contented. In exchange for the freedom to lie I would no longer kiss Nana’s black Jesus.

Several weeks passed by before the alterations to this particular holy text went noticed. Christmas left reluctantly and the Southern California rains came in lackluster sprinkles or vigorous downpours. I’d also discovered a few more transgressions that needed to be included in the commandments. Now I was free to lie at will, covet my neighbor’s ass, and completely ignore the Sabbath day as needed. The day Nana found the Post-it note that read “thou shalt not drip milk on the carpet,” she roared like a car crash.

“The Bible is God’s word,” she said, “and God is His word. That’s like trying to cover up the Lord Himself. You can’t put Wite-Out on God!”

“Then they shouldn’t have put God on paper!” I told her.

Nana belongs to the generation of obedience as success and atonement as failure. I belong to the generation of choose your own adventure. Life means adaptation  and renewal. I may convert to new faiths. I may travel to foreign communities. My arm may end up in some witch doctor’s stew. I may taste like soy sauce and tears. Each cell of the planet may be lovely and terrible, but we aren’t afraid to look and see. Nana calmed a little, and we spoke like women. She told me Jesus had copper skin and hair of wool, which sounds a lot like my uncle Sheldon. I confessed my reason for kissing Nana’s Jesus. For good luck, I said. I lied. The truth I didn’t know how to say then. I’d never kissed a man yet, of course, not a father or a brother or a lover. Kissing that photo meant kissing the best of all men because the best of all men is the one very carefully imagined.

Nana made me fix her Bible for the most part. So the commandments were returned to stone, and I had my ritual. Several winters later Nana isn’t able to walk on her own anymore, so I stay by her most afternoons and read. She says I killed her with my defiance. I think I might be stealing her size. I grow bigger, and she grows smaller. When morticians remove organs and weigh them, does anyone measure the tare of the body? What does one weigh without the heart? I’d guess as much as the dead, almost nothing. I read to her from the Bible or magazines or Christmas stories that Nana approves of, but they’re never the same when I say them. My mood changes and so does hers. Tonight I tell her, “The crucifix hung from the chimney with care, and Santa’s reindeer stood on two hooves with hips jutted to the side in the universal manner of disbelief. Jingle your bells for me, baby; we are all angels.” When she is gone I will miss her forever.

From Black Jesus and Other Superheroes. Used with permission of University of Nebraska Press. Copyright © 2017 by Venita Blackburn.


Black Jesus and Other SuperheroesExcerptStoriesUniversity of Nebraska PressVenita Blackburn
Share: 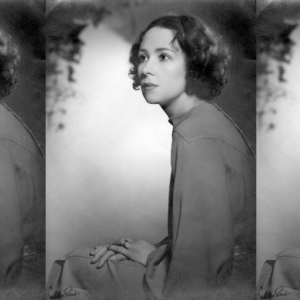 Lit Hub Daily: September 1, 2017 15 books you should read this September. | Literary Hub How to write a book with traumatic brain injury: Alice...
© LitHub
Back to top