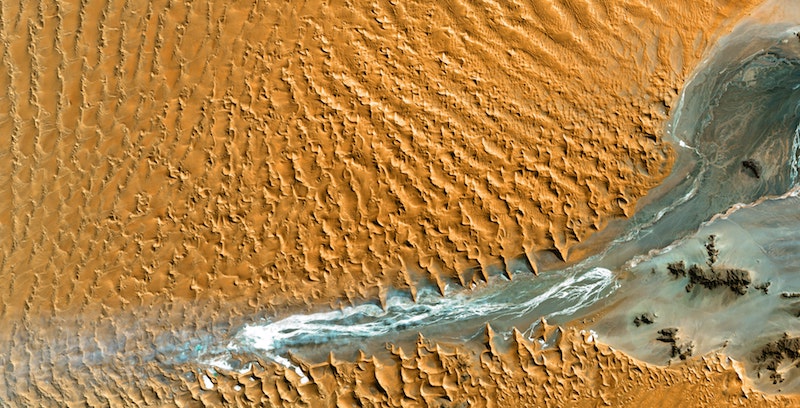 Like the good student he is, Gazan immediately begins trying to figure out what these two moons are by meditating for a long time. It takes him years. Likewise, the reader of this story wonders what the two moons in question are. There’s only one moon, after all. This particular story points to the notion that we don’t fully live in reality, but through our conceptualizations. One moon is the conceptualization of the moon in our mind, which we mistake for the real moon, and one is the real moon.

The story is not concerned with which moon is real, but with another question: how do we know when we’re encountering the real moon? The question after that is: do we even know how? A burgeoning genre of literature—eco-literature—tackles a similar questions. With the climate crisis as its animating force, new books are asking new questions about what it means to be a mind experiencing a world in crisis.

When I first began my new novel, Our Last Year, I didn’t understand immediately that I would be writing about nature. Even writing “nature” feels inadequate, as does “the environment” and “climate change”. I did end up writing about these things, but not in the way that I could’ve imagined. My intentions were much smaller: my marriage had nearly fallen apart, then repaired, and now, after months and possibly years of darkness, I was ready to write about this relationship so central to my life.

This is where Our Last Year essentially begins: a couple, in a relationship, but no longer in connection, distant from one another  and distant from their lives. The prose, I understood, would be winding, internal, blocks of text, labyrinthine and yet clear, accessible to a reader but with each character inwardly, half-consciously telling themselves the story of why things were the way they were, although not understanding why.

With the climate crisis as its animating force, new books are asking new questions about what it means to be a mind experiencing a world in crisis.

When I investigated this couple on the page—their distance from one another, their negativity toward one another—I began to understand that their attitude is the same attitude our society has toward “nature.” The idea I came to was simple: the couple in the novel is out of balance with each other, unable to see each other for their own created stories; still connected, but negatively.

Likewise, our society, and most of us as individuals, are out of balance with what we might call “nature” or “the wild” or “the cosmos”—whatever particular conceptualization you like. I came to the notion that I could write about the climate crisis, which I now view as a crisis of apprehending reality, through a small domestic crisis. After writing Our Last Year, I found other novels that have similar domestic façade, while actually being about our shared ecology.

In Weather by Jenny Offill, the main character is Lizzie, an academic with a family, who answers emails for a podcast that covers numerous modern calamities, a primary one being climate change. Lizzie is acerbic, ironic, using her humor to seemingly deflect her fears about what she increasingly thinks of as the coming apocalypse. She’s a low-level doomer, intent on thinking through various survival scenarios should some devastating event occur (climate-related or not). In an email response about ways to prepare children for the coming chaos, she suggests teaching “them to sew, to farm, to build.”

Ironically, she’s a thinker more than a doer. She doesn’t do much in Weather, and that, I think, is like us all —she thinks about the coming doom. Her thinking, of course, is much like Gazan’s confusion about the two moons—he does a lot of thinking after Keizan’s challenge. Conceptualizing doom is of course helpful, but insisting on it at all hours, on the other hand, is neurotic, and this is where we find our narrator, in the throes of her neurosis. Lizzie notes, “There are fewer and fewer birds these days. This is hole I tumbled down an hour ago.” She tells a friend that she’s been thinking of buying “some land somewhere colder.” And then, “I keep wondering how we might channel all of this dread into action.”

This is the problem—how do we take action? What action might we take? Lizzie never really takes any action in Weather, and this itself seems part of what Weather is trying to say. As the book ends, the narrator answers her meditation teacher’s question. What is the core delusion? The core delusion, Lizzie narrates, is that I am here and you are there. And yet Lizzie never leaves the confines of her own doom-prepping. I read Weather as a reminder not to fall into the trap of only thinking about the world in a doomed way, and that a certain way of thinking is the trap itself.

If Weather by Jenny Offill is about the danger of overthinking in times of danger, then Tao Lin’s Leave Society is the search to end that neurosis. I’ve written about Lin’s book more extensively here, but that review didn’t include what I view as a hidden message about the individual self and the body of the planet.

In Leave Society, Li is trying to recover from the negative impacts of a confused society: he is getting off of pharmaceuticals, detoxifying his body, learning to communicate and connect with his parents, and finding answers to why society is the way it is: domineering, male-oriented, and destructive. Li, through much research in an attempt to heal both his body and his mindset, begins to see new ways to live by.

The partnership model of society, championed by Riane Eisler in The Chalice and the Blade, allows Li to see a more positive way to interact with the world and an alternative to the destructive, patriarchal society we exist in. This wide-lens approach is balanced with inward change. Leave Society is a climate change novel in which a major step in correcting the course of the planet is reorienting one’s own mind. Li pointedly rejects neurosis: “[two years ago] He was auto-shit-talking—half-consciously cathecting disapproving thoughts about himself, his family, his friends, and his acquaintances […] ‘Stop shit-talking {person} and focus on {productive activity},’ he’d been saying aloud whenever he became aware of himself doing it.”

Here, Li takes the reins of his mind—in Zen, this is mindfulness. He trains it away from negativity. Likewise, he trains his mind toward deepening his life: “Awe seemed somewhat elusive in urban America […],” but now, two years into his recovery, “he felt it by thinking of how a fetus who predicted nothing existed outside the womb would be wrong, how a character who believed its eighty-thousand-word world was everything would also be woefully incorrect, how there might be places as unknowable to people as dreams were to electrons.”

In a seeming contradiction to our normal way of perceiving, the sense that we’re misapprehending reality actually deepens the mysterious experience of it. Whereas Offill’s novel is warning, Lin’s is a guide, a model, toward activity of a less neurotic mind as well as one more connected to others and the natural world.

Everything begins in our consciousness, and these books point toward ways of reshaping that consciousness in order to really encounter the vast thing we’re changing.

Emergency by Daisy Hildyard is about the actual reality of our position: enmeshed in interconnective reality, human, plant, animal, and machine, in which everything has a boundary, but is also porous. Hildyard’s protagonist is eight or nine. She lives in a small village in the countryside of the UK, exploring the surrounding farms, woods, and the nearby quarry. She’s in a specific place, but she’s connected to the rest of the world, Hildyard notes, through a web of commerce, industry and the natural world: bananas from South America appear in her village grocery store; tab from a Fanta can ends up in the stomach of a bird across the world; humans come and go from the village. Hildyard makes a criticism of an ecological point of view that leaves out the human:

I have noticed how expressions of care for the environment are often outlets for hatred of other humans, both in the accusation that we are bad for other species, in which the accuser rarely seems to understand themselves to be a part of any we, and also in the protection of a privileged experience of greenery over the voices and essential needs of the poorer indigenous and local people.

Our mind is also a part of a village, a landscape, a planet. There is something energetic in Emergency, something mystical about the human and non-human really meeting, as in this passage: “The moon seemed to come alive at that time of year, hanging low in the sky with all its scars in focus, and it was sphere, not a circle—to see it was to witness a force with a different and uncomfortably familiar agency.”

It’s this different, yet familiar force that Emergency asks us to meet. Emergency’s protagonist is constantly reorienting her perspective, sometimes quite literally: “With my eyes grass level I noticed that there was a tiny forest down there. My shins went higher than the tops of its highest trees. A bright red stalk, two inches high, with a sycamore leaf pushing out of the top[…] No conservationist would be able to define this collection of tiny trees as a forest; it is easier to protect the past than the future.”

Emergency reminds us, through its young protagonist, that we often miss so much of the world, so much of reality. Do we know that there are two moons? Do we know how to meet the real one? Hildyard’s protagonist is a reminder that there are other ways of being, seeing and thinking, and, like the gardener in the novel that creates the optimal conditions for the plants in a garden, there is something creating the optimal conditions for us, an interconnected reality of which our minds are but a small part.

As Our Last Year progresses, the couple goes to therapy, they untangle their negative habits and ways of being, and in turn, they begin to see one another again. They begin to see the world around them. It’s not just nature that they’re seeing, but a new body of which they’re a part. Eventually, what the couple experience in Our Last Year is a new way to be. Our Last Year, like Weather, Leave Society, and Emergency, is about reorienting one’s mind.

In this way, the new eco-literature is not just about the pending apocalypse or dystopia or climate change alone. Rather, these books are about how we encounter the world, which means they are about our minds. Everything begins in our consciousness, and these books point toward ways of reshaping that consciousness in order to really encounter the vast thing we’re changing. 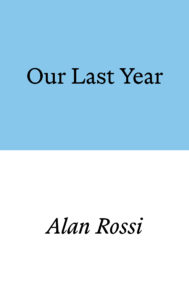 Alan Rossi’s fiction has appeared in Granta, The Missouri Review, The New England Review, and many other journals. His novella Did You Really Just Say That To Me? was awarded the third annual New England Review Award for Emerging Writers. His fiction has also won a Pushcart Prize and an O. Henry Prize. His first novel, Mountain Road, Late at Night, was published by Picador in 2020. Our Last Year is his latest novel. 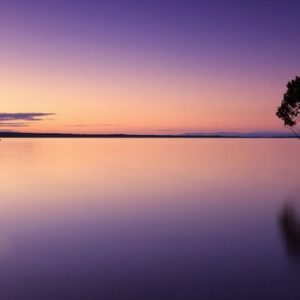 For much of human’s time on the planet, before the great delusion, we lived in cultures that understood us not as “masters...
© LitHub
Back to top
Loading Comments...