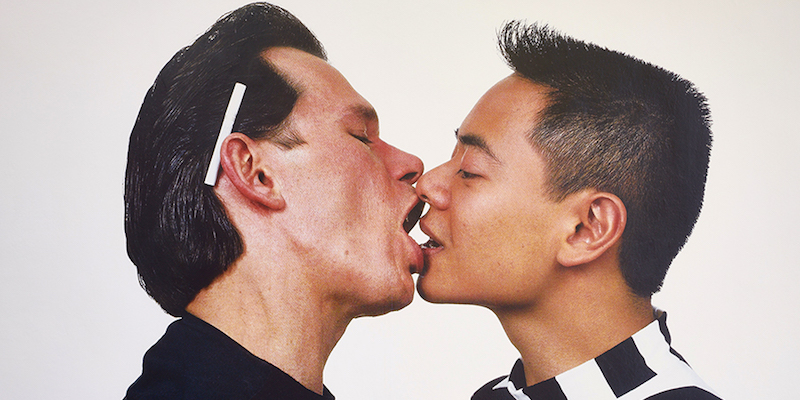 Jack Lowery on Real-Time Intersectionality in the Fight Against AIDS

Kissing was an integral part of ACT UP’s culture, beyond just ACT UP’s kiss-ins, like the one that Read My Lips was intended to advertise. If you saw a friend at an ACT UP meeting, you greeted them with a kiss. It was the same if you met up with an ACT UP friend for drinks or coffee. Dorow described kissing as a blood pact. “Everyone in the world tells me to be afraid of you, and that you’re a danger,” was how she described its rationale. Kissing someone refuted this. It was a way of saying, “I’m not afraid of you. I’m with you.”

But when Dorow agreed to be part of Kissing Doesn’t Kill she hadn’t realized that she’d be kissing people on camera. “I barely understood what was going on,” she said. “I just kind of showed up.” Once she arrived and realized what was happening, Dorow was a nervous wreck for two reasons. “One, there were super hot girls there, who I longed for from afar,” she recalled. “And, I was with Maria, my girlfriend, so I was nervous about that too.” Maggenti had a reputation for being competitive and wanted to kiss everyone. “Maria was in her element,” Dorow said. “She loves to get her picture taken.” Dorow blacked out all the memories of having to kiss other people. “I’m sure I was a horrible subject because I was so anxious,” she said. “So the irony that I ended up in the poster is insane.”

At the shoot, the Gran Fury folks barked orders, telling people which clothes to try on and suggesting different couples. Finkelstein employed his work as a hairdresser and art director, and focused on the styling. “Avram was doing our hair,” Dorow recalled. “Or at minimum, combing our hair, which wasn’t at the top of my agenda during that period of my life.” McAlpin, a trained photographer, shot the actual photos.

There weren’t any actual heterosexuals at the shoot, so Dorow got paired with Vazquez-Pacheco, as Gran Fury’s members thought they made for the most convincing straight couple. It made for a pretty sterile kiss. At the shoot, Dorow joked that it felt like the preparty of a high school prom, with all the gays pairing with lesbians, and pretending to be straight for the sake of their parents.

The members of Gran Fury had also contacted Jose Fidelino, another ACT UP member. In Fidelino’s recollection, he got contacted to be part of Kissing Doesn’t Kill by Bob Rafsky, the member of the coordinating committee who, just a year before, had lobbied against funding Gran Fury’s posters for the Nine Days of Rage. It’s not clear why Rafsky was tasked with this. “I’m sure he slept with somebody in Gran Fury at some point,” Fidelino joked.

Fidelino said that he agreed to participate because of Gran Fury’s cultural cache. But he also had deeper reasons for wanting to participate in something like Kissing Doesn’t Kill. Being from Overland Park, Kansas, a suburb of Kansas City, Fidelino grew up seeing nobody that looked like him—bookish, gay and Filipino. “You didn’t see any gay people, except for the awful stereotypes in the media,” Fidelino recalled. He left Overland Park as soon as he could, but didn’t forget this experience. “Part of my ethos was that I have to live my life so that it’s easier for younger gay people,” he recalled. And of all the work that Fidelino did in ACT UP, Kissing Doesn’t Kill undeniably became the most notable example of this.

Whereas it was once an organization of gay white men in their mid-thirties, ACT UP was beginning to look more like this poster, and less like Larry Kramer.

When Fidelino arrived at the shoot, he noticed the clothes that were laid out for them to wear. “Those clothes, in person, were hideous,” he recalled. “They were made of this cheap, polyester double-knit.” And they were uncomfortable too. Annette Breindel, Simpson’s surrogate mother, had supplied much of the clothing needed to mimic a Benetton ad. Kalin insisted that these were not cheap polyester, but rather, luxe cashmere, though he conceded that they might have been uncomfortable, given how warm it was at the shoot.

Either way, this was not what ACT UP’s members were accustomed to wearing. By now, ACT UP’s signature look—Levi’s, black boots, an activist T-shirt and a leather jacket—was practically a uniform. “That East Village, working-class chic look,” as Fidelino put it. These clothes were a far departure from that. “Clearly they knew what they were doing,” Fidelino admitted. “They looked bad in person. They felt bad when you wore them. But they looked great on camera.”

The members of Gran Fury made different suggestions for whom Fidelino should kiss, but ultimately settled upon one of their own, Mark Simpson. How many of these Gran Fury people are getting their pictures taken too? Dorow wondered. Fidelino had never met Simpson before, and didn’t didn’t really enjoy their kiss. Simpson was a smoker, as evidenced by the cigarette tucked behind his ear, and Fidelino was not. “Not to speak ill of the dead,” said Fidelino. “But it was like kissing an ashtray.” As unpleasant as it might have been in the moment, the image was certainly a striking one. “I look like I’m about to get eaten alive,” Fidelino said of the final shot. “I’m convinced that I got picked only because Mark opened his mouth and it made for such a strange image.” 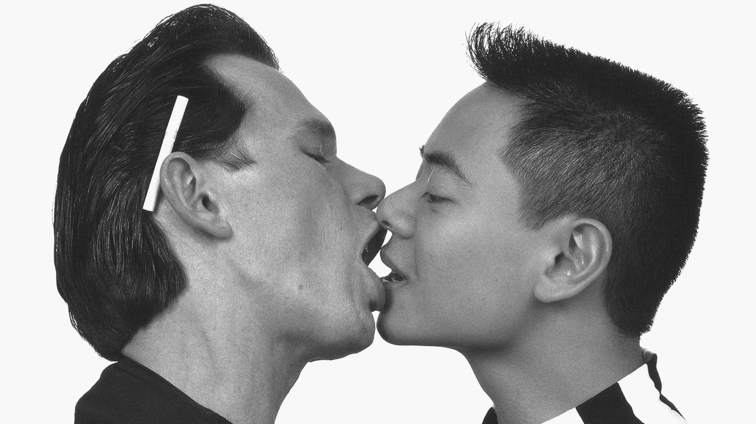 The third couple included in Kissing Doesn’t Kill was actually a real-life couple, something that is evident in the final poster. Kalin had likewise shot footage of Lola Flash and Julie Tolentino kissing before they were invited to the shoot. “I grew up not seeing myself,” Flash recalled, making something like Kissing Doesn’t Kill all the more meaningful. “None of the Black people I saw in popular culture looked like the Black people in my family. They were all challenged in some way, financially or mentally. Both my parents are teachers. My friends’ parents were doctors. I came from a very middle-class background. But I didn’t really see those images of Black people.” Images of lesbians were even harder to come by, and she didn’t realize that lesbians besides herself existed. “Back then, I thought that just guys were gay,” she recalled. She knew that she was into girls, but had no idea that others were too. “I just thought I was like from Mars or something,” Flash recalled.

Flash’s girlfriend had had the exact opposite experience. Growing up in San Francisco in the 1970s, Tolentino found no shortage of gays and lesbians in her life. She described her mother as “the quintessential fag hag” and there always seemed to be leathermen and radical faeries passing through their apartment. One of the most pivotal events of her life was the assassination of the city’s mayor, George Moscone, and Harvey Milk. Tolentino actually attended the same school as Moscone’s daughters. Taking the crosstown bus from school that day, she got off at Market and Castro and joined a 25,000-person candlelit march to city hall. “I consider that my coming-out day,” Tolentino recalled.

Tolentino also found something like Kissing Doesn’t Kill to be meaningful, not because it featured queer people, but because it featured such a wide swath of them. When she moved to New York, Tolentino found it strange how the city’s gay and lesbian life seemed so segregated. “The class and color lines were more intense than I had ever experienced,” she said. “Leather guys hung out together,” Tolentino recalled. “Uptown, business, lesbian real estate mogul ladies hung out uptown.” In Tolentino’s recollection, the middle-class, butch, Black lesbians hung out in different spots than the middle-class, femme, Black lesbians. And Tolentino found that those class and color lines were very apparent in ACT UP too. Kissing Doesn’t Kill, and the choice of who appeared in it, was an antidote to this kind of segregation among gays and lesbians, and an attempt to dissolve it. “We weren’t yet using the term intersectionality,” Tolentino recalled. “That was being done in real time.”

You can see also, in this poster, how ACT UP’s demographics had changed in the past two years, though Fidelino, Flash, Tolentino and Vazquez-Pacheco all cautioned that ACT UP wasn’t quite as diverse as Kissing Doesn’t Kill would make it seem. Still, the organization had undergone a remarkable shift. Whereas it was once an organization of gay white men in their mid-thirties, ACT UP was beginning to look more like this poster, and less like Larry Kramer. 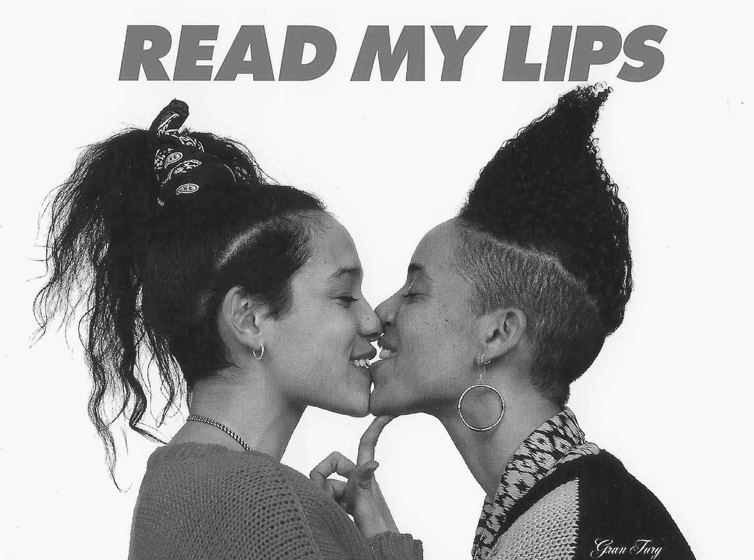 In a separate shoot, Gran Fury also made a series of thirty-second video shorts, which were almost identical to the poster version. Flash and Tolentino returned for the video shoot, as did a number of people who were friends with the Gran Fury folks, including David Wojnarowicz and Nan Goldin. The shorts were originally supposed to air on ABC, as part of a television special accompanying the album Red Hot + Blue, a charity compilation album. But the channel’s executives thought the spots would be too controversial, and so they declined to air them. The video versions of Kissing Doesn’t Kill did, however, air on MTV Europe.

Toward the end of the video shoot, almost everyone from Gran Fury got in front of the camera together and started dancing. It feels completely unstaged, like they’ve kept the tape rolling for posterity’s sake, and that what they’re filming will never end up in the actual video. McAlpin or Finkelstein must be holding the camera, because they were the only ones at the shoot who don’t appear. Everyone else’s personality is on display. Nesline stands out, only because he’s so much taller than everyone else. McCarty, Moffett and Lindell all pal around together. Nesline, then Simpson, sashay up to the camera, ensuring their close-ups. Kalin and Vazquez-Pacheco then enter, parading collapsible reflectors, dancing with them like signs held over their heads. You can tell, by the easiness of it, that they’ve danced together like this dozens of times before. The video is silent, but wouldn’t you love to know what song is playing? 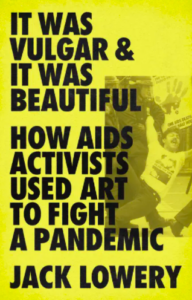 This article has been adapted from It Was Vulgar & It Was Beautiful by Jack Lowery. Copyright © 2022. Available from Bold Type Books, an imprint of Perseus Books, LLC, a subsidiary of Hachette Book Group.

Jack Lowery is a writer and teacher, whose writing has appeared in The Atlantic, The Times Literary Supplement and The Awl. He completed his MFA in Nonfiction Writing at Columbia University, and has taught in the Undergraduate Writing Program at Columbia University. As an editor, he has published the poetry of David Wojnarowicz. He lives in Brooklyn.

How Mastering Community Requires Us to Also Master Civility

From Aspiring Cartoonist to The New Yorker 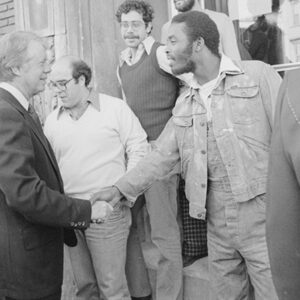 How Mastering Community Requires Us to Also Master Civility