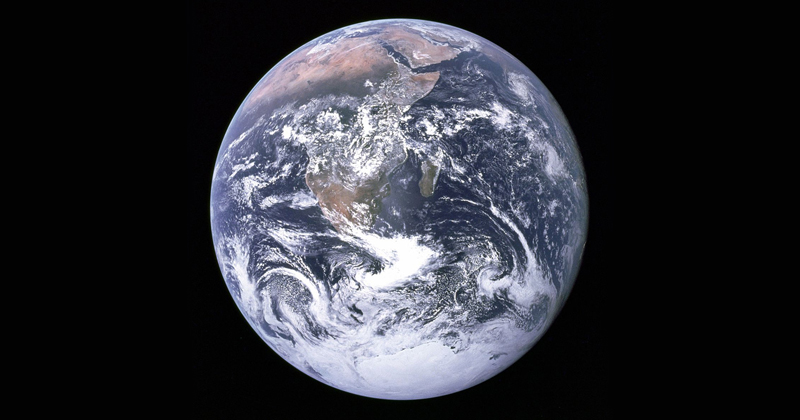 How We See the Earth Changes How We See Ourselves

Richard Underwood was keen to get the photographs that came back from the Apollo 17 mission developed as quickly as possible. He took some of them home to show his children, sure in his own mind that they were going to be influential. As he began to lay them out on the table, his son said: “Uh oh, Dad’s going to show us some more of that junk from space.”

NASA photograph AS17-148-22726, popularly called the “Blue Marble,” was released to the public on Christmas Eve 1972, four years to the day after Earthrise had been taken. NASA’s press office made much of the image, though in the mission’s official report the photograph isn’t mentioned at all. Nor did the astronauts refer to it when—as was traditional after each mission—they reported to Congress.

Jack Schmitt had taken the photograph with Antarctica at the top, but NASA released it the “right” way up. By continually orienting photographs of the Earth with Antarctica at the bottom we are encouraged to hold on to an old paradigm of what the earth is. The enlightenment that came to most of those who had seen it for themselves, was to experience the Earth as a globe falling through space. We can understand it intellectually but to truly get it—that we live here on the surface of a sphere, rock and water bounded about by a skin of an atmosphere, forever plunging through black space—that is something else. Can a photograph alone provoke that Zen-like leap of understanding? Certainly a photograph with Antarctica at the “bottom” does not help. The Blue Marble showed a full (or, to be precise, an almost entirely full) Earth seen in full sunlight. Because it had been taken relatively close to the Earth there was also a lot of detail in the photograph. It was centered on Madagascar, which meant that the world got to see for the first time how truly enormous Africa is. As it is projected on most maps, Africa appears much smaller than its true size—as do all countries around the equator. Even now most people do not realize quite how vast Africa is. The landmasses of all of China, the United States, India and Japan added together, plus nearly all of Europe, fit within Africa’s coastline. Appropriately enough, one of the first people to see the photograph was Victor Hasselblad, who happened to be visiting the Manned Space Center at the time. It was his modified camera that had gone to the moon on all the Apollo missions, his camera that had taken Earthrise and the Blue Marble photographs. 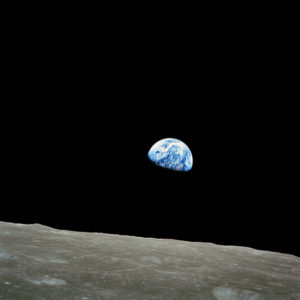 In 1948 the physicist Fred Hoyle had predicted that “Once a photograph of the Earth, taken from the outside, is available . . . a new idea as powerful as any in history will be let loose.” What he hadn’t predicted was that the photograph would need to be of the highest quality and in color. Two such photographs spanned the Apollo era: Earthrise, taken during the first manned mission to the moon, and the Blue Marble, taken during the last. They have become two of the most reproduced images of all time. In Life magazine’s 2003 publication: 100 Photographs That Changed the World wilderness photographer Galen Rowell called Earthrise “the most influential environmental photograph ever taken.”

In 1966, a 28-year-old rock promoter named Stewart Brand started a campaign to persuade NASA to release what was rumored to—but did in fact not then—exist: a color photograph of the whole Earth. Brand was a member of Ken Kesey’s 1960s commune “The Merry Pranksters,” based at Kesey’s homes in California and Oregon, and a contractor to Paul Krassner’s The Realist, the magazine for which Madalyn O’Hair also wrote. The idea for the campaign had come to Brand on a February afternoon in San Francisco:

I had taken a mild dose of LSD on an otherwise boring afternoon and sat, wrapped in a blanket, gazing at the San Francisco skyline. As I stared at the city’s high-rises, I realized they were not really parallel, but diverged slightly at the top because of the curve of the earth. I started think that the curve of the earth must be more dramatic the higher one went. I could see that it was curved, think it, and finally feel it. I imagined going farther and farther into orbit and soon realized that the sight of the entire planet, seen at once, would be quite dramatic and would make a point that Buckminster Fuller was always ranting about: that people act as if the earth is flat, when in reality it is spherical and extremely finite, and until we learn to treat it as a finite thing, we will never get civilization right. I herded my trembling thoughts together as the winds blew and time passed. And I figured a photograph—a color photograph—would help make that happen. There it would be for all to see, the earth complete, tiny, adrift, and no one would ever perceive things the same way.

Buckminster Fuller—who was then in his early seventies, and at the height of his fame as a philosopher and inventor—agreed to help Brand achieve his objective. In 1951 Fuller had come up with the phrase “spaceship Earth,” a way to try and shock us into enlightenment using words. All of us on Earth are astronauts, he told us, all voyagers through space. To raise money for his campaign, Brand sold 25-cent badges bearing the legend: “Why haven’t we seen the whole Earth yet?” The badges were distributed widely; some were mailed to NASA officials, though no one there has owned up to receiving one. It is not clear how much Brand’s campaign influenced NASA, but a few months after it had begun Lunar Orbiter had been repositioned so that it could take a single black-and-white photograph of the whole Earth, the first ever. And by the end of 1967 the ATS-3 and DODGE satellites, and a camera placed on Apollo 4, had taken the first color images of the whole Earth. In the style of Warhol’s epic move Empire (1964)—eight hours of long takes of the Empire State Building—Brand screened 24 hours’ worth of footage from the ATS-3, a film he titled Full Earth.

In September 1968 the first edition of Stewart Brand’s Whole Earth Catalog was published, a counter-culture magazine that promoted the idea of communal living and a self-sufficient lifestyle. It listed clothing, books, tools, machinery, anything that might enable or sustain creativity or self-sufficiency. The catalog was a response to a world that had become wasteful, nowhere more so than in wealthy America. The magazine encouraged a movement back to the land and a do-it-yourself attitude that was encapsulated in the catalog’s motto and first sentence, “We are as gods, and may as well get used to it.” In America at that time, an estimated 10 million people were living in communes. Steve Jobs later described the catalog as “one of the bibles of my generation. It was sort of like Google in paperback form.” On the cover Brand used the photograph of the whole Earth that had been taken by ATS-3 the previous November. Subsequent editions of the the magazine followed at roughly three-monthly intervals. “Earthrise” was used on the cover of the 1969 spring issue. “It gave the sense that Earth’s an island,” Brand said of the photograph, “surrounded by a lot of inhospitable space. And so graphic, this little blue, white, green and grown jewel-like icon among quite a featureless black vacuum.” The last issue of the catalog came out in 1972, first to last neatly spanning the Apollo years. On the cover of the last issue Brand used a photograph taken by Apollo 4. It showed the Earth in partial shadow. He wondered later if the shadow might have been off-putting to people, frightening even. A thousand copies were printed of the first issue of the catalog. The last issue was published by Penguin in an edition of a million copies. Brand immediately launched a new magazine, CoEvolution Quarterly, a platform from which to explore environmental concerns. The magazine published essays from various perspectives by a diverse group of writers that included Ursula LeGuin, Wendell Berry, Gregory Bateson, Eric Drexler, Lynn Margulis, Paul Hawken and Kevin Kelly (future editor of Wired magazine).

Only 24 human beings have ever seen the Earth from space, the 24 Apollo astronauts who went to the moon and were safely returned to the Earth again. Only they have ever seen the Earth as if from the perspective of an alien. Only they have seen the Earth as it truly is, a sphere falling through space. Nearly all of them were struck by how fragile the Earth looks. From space the Earth’s atmosphere appears as a thin blue line around the circumference of the planet, a hazy penumbra of a mere 50 miles clinging to a disk 8,000 miles across. “It is a pity,” Mike Collins wrote, “that my eyes have seen more than my brain has been able to assimilate.” And yet of all the astronauts who left Earth orbit, he came closest to describing in words the sense and the feeling of what he had experienced: “The moon is so scarred,” he wrote, “so desolate, so monotonous, that I cannot recall its tortured surface without thinking of the infinite variety the delightful planet earth offers: misty waterfalls, pine forests, rose gardens, blues and greens and reds and whites that are entirely missing on the gray-tan moon.” On his way back home, he looked out of the window and tried to find the Earth:

The little planet is so small out there in the vastness that at first I couldn’t even locate it. And when I did, a tingling of awe spread over me. There it was, shining like a jewel in a black sky. I looked at it in wonderment, suddenly aware of how its uniqueness is stamped in every atom of my body . . . I looked away for a moment and, poof, it was gone. I couldn’t find it again without searching closely.

At that point I made my discovery. Suddenly I knew what a tiny, fragile thing Earth is.

Apollo 17 Jack Schmitt did not agree. “I think the pictures make it look a lot more fragile than it is,” he said. “The Earth is very resilient . . . I know what blows it’s taken.”

So which is it, fragile or robust? 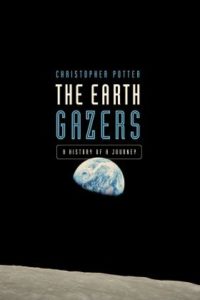 From The Earth Gazers: On Seeing Ourselves. Used with permission of the publisher, Pegasus. Copyright © 2018 by Christopher Potter.

Christopher Potter was publisher and managing director at the independent publishing house Fourth Estate. He is the author of You Are Here: A Portable History of the Universe and The Earth Gazers: On Seeing Ourselves. He divides his time between London and New York City. 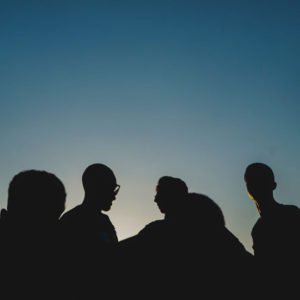 The first question I get from audiences after giving a talk about Girls & Sex, is nearly always, “Would you please...
© LitHub
Back to top
Loading Comments...