Hear From One of This Year’s New Golden Voices

Narrator Rupert Degas spoke with host Jo Reed for a bonus episode of Behind the Mic. Rupert was named one of AudioFile’s 2022 Golden Voice narrators. He’s a versatile performer, and he’s particularly skilled with national and regional accents, fueled in part by his interest in linguistics. Listening to Rupert narrate is an immersive experience thanks to his heartfelt performances. He is celebrated for his work in audiobooks ranging from the dazzling full-cast production of The Golden Compass—he plays the daemon Pantalaimon—to Gerald Durrell’s memoirs.

Listen in to his conversation with Jo below to hear more about how he got his start in acting and narration, the one accent that always gives him trouble, and how he works to lean into his performances to bring stories alive for listeners.

Jo Reed: You perform books. You’re not just reading, you follow the directions indicated by the author in the text. If they cough, you cough. If they’re smoking, you inhale as though you’re smoking when that is indicated.

Rupert Degas: Well, you know, I’m an actor, I want to perform the book. To me, again, it goes back to the radio, back to His Dark Materials, because why was that audiobook so good? Because you had all these characters. Now, when you’ve got someone who can hopefully, you know, touch wood, have the versatility where they can play all these characters, you want to perform it. I imagine it. I see it as a movie in my mind. So when the writer says “he whispered,” then, of course, I’m going to whisper. If the character is shouting, I’m going to lean back and shout. If a character is getting up from a table, you know, you have the movement up. Yeah. Hello. You know, you’ve got to have that body movement. They’re running. You know? For me I want the listener to feel like they’re immersed in a film. And if you don’t want that, well, tough.

Rupert Degas: Well, that’s fantastic. That’s really good. Some people don’t. And I get that. They’re entitled to not like it, but I don’t want to read something as if I’m reading the phone book. And if you’re the kind of listener that wants your audiobook to sound like a GPS, you know, or to sound like, all flat in one tone, well, you’re going to have to listen to some other narrators because it’s not my bag. I’m there to perform and bring those characters to life.

Jo Reed: That’s when we drive off the road because we’re so bored. You mentioned you talk to authors if the author is living. I’m curious. What questions do you ask him or her? What do you try to discuss with them?

Rupert Degas: Well, what I like to do with authors is to say, look—I don’t read the books first. There aren’t enough hours in the day to read the book. And I like going on a journey with the story. So I say to the author, look, can you give me a rundown of the characters? Maybe not down to the guys that have got one line or something. But if I can get a list of the age, the gender, the regional accent, the educational level, social status, their profession, anything else. I mean, sometimes I even say to authors, look, if money were no object and you could do a movie of your book, who would you cast in your mind? So it can be anything. Sometimes authors will send me, they’ll say, Philippe, 12 years old, French. Well, great. He’s a 12-year-old French boy called Philippe, clearly. Or sometimes I get things like, oh, he’s the baddie. He’s a failed lawyer from the Midwest who got involved with such and such. And it’s really detailed. He likes this, and he went to law school, and yada, yada, yada, and he’s got smarts. And he’s in his late 20s, and he’s from this particular town. It’s fantastic. Any detail, as little or as much, whatever the author feels I need to bring the voice that’s in their head to life, is happy. And references are great. If someone says look, he’s a young Harrison Ford. Or I had one author say to me, “Look, I wrote this with Tony Blair in my head.” And I went, great. I’ll just do Tony Blair. So, you know, I just made the entire character Tony Blair, sort of a subtle version of that, and that sort of came out.

Jo Reed: And when you narrate a series like the Rowland Sinclair series, which I love, you have to determine a voice for all these characters. And as we know, Rowland visits England, and Germany, and America, and China, so there’s this plethora of voices. And it’s another range of accents that keep flying across the page. And you have to remember the core accents from book to book.

Rupert Degas: Yes. I mean, the nice thing about doing a big series like the Rowland Sinclair series is these characters become part of you, because I’ve dealt with them for several years now. The very first book I did, Sulari Gentill, the author, was in the session in the studio with me, and she was absolutely lovely, and we sort of discussed the characters and their backgrounds and their social status and their educational level and where they were from and how they were raised and etc. So, we found those voices. And then the more I did the books, when it got to the last book, Sulari told me that she’s hearing now my voice in her head as she’s writing Rowland. These characters now, she says, are in her mind, which is great—sometimes she messages me and she says, “Oh, I’ve got some humdinger voices for you in the next book. How is your such and such accent? I’m going to try and test you.” She says, “And see if you can do that,” which is amazing to have an author write the book with the narrator’s voice in mind. It’s fantastic.

Support for Behind the Mic comes from Dreamscape Media, your library-first publisher who prides themselves on offering high-quality and accessible entertainment for the entire family. Dreamscape is passionate about their content and continually strives for excellence. 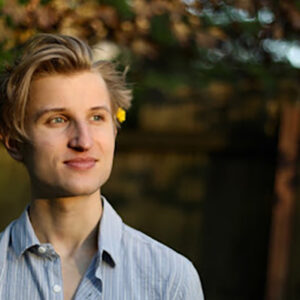