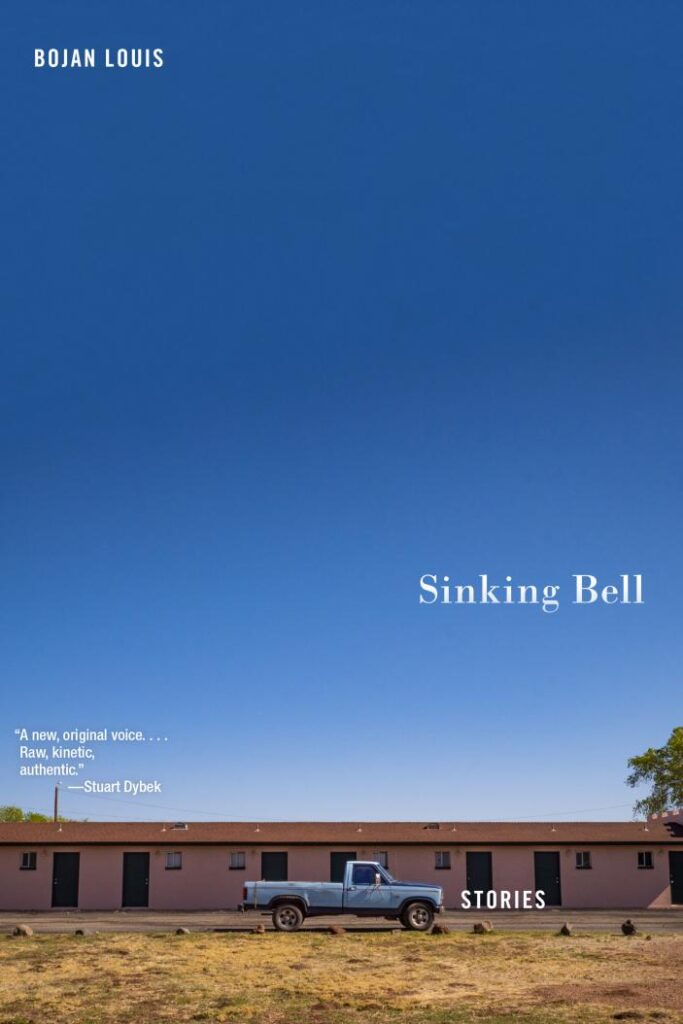 The following is from Bojan Louis' Sinking Bell. Louis is Diné of the Naakai dine’é, born for the Áshííhí. He is the author of a book of poetry, Currents, which received an American Book Award. He has been a resident at MacDowell. He teaches creative writing at the University of Arizona.

Part of Karl’s night custodian job was to incinerate the monthly shipment of test subjects that arrived through a tunnel, half a mile away, on Forest Service land, to a secure basement beneath Research and Development, where a freight elevator ascended to surgical rooms. Karl’s only contact with the discards came after the large storage freezer had been filled to its ceiling and he was forced to dismantle the frosted wall of red plastic bags—black biohazard flowers folded and partially exposed—then cart the subjects and heft them into the cremation furnace. When he was hired, Re-Dev’s head explained to Karl that this process was the most ethical, efficient way to dispose of the strays, rabbits, and coyotes that a statewide euthanization project abundantly provided. Some of the human remains Re-Dev received were organ-donor accident victims, but most were inmates and ex-cons who, after having maintained a semi-consistent good behavior status while locked up, were granted the opportunity to donate viscera or their entirety to science in exchange for time off their sentences. Each organ fetched seven days. A whole body, seven years. Bodies that became the property of science.

At first, the secret incinerations mattered little to Karl. Twenty-two years old, with a high school education, he wanted decent on-time pay that didn’t require an early clock-in and afforded him the leniency and solitude to rock out to metal music cassettes on his Walkman. When HR demanded that he comply and sign two secrecy agreements—one regarding the facility’s incineration and disposal of animals and inmates, the other concerning the secrecy of the secrecy agreement—Karl, without hesitation, scribbled his signature. Although some weeks after this, it was Jonas the anesthesiologist who suggested to Karl that if he was asked what the company he worked for did, he should answer that it manufactured micro-thin moisture barriers for extreme-weather active apparel and a noncarcinogenic hard plastic alternative. Never mention the company’s unpublicized medical research, despite its unrivaled advancements in developing replacement arteries, synthetic blood vessels, joint cartilage, and breast implant sacs.

Karl listened to Jonas relate these facts and advice as unconsciously as he had followed him out of the building in the evenings to smoke, taking note of the access code Jonas entered for a side door that exited onto a small concrete pad next to a high-tension fence hung with No Trespassing signs. Outside, as the temperature fell, Jonas blabbed about the day—who was fucking up, who pulled their weight, who had never showed up without explanation again. These small conversations eased Karl’s initial doubt about having to veil his secondary task. Jonas was above him in the hierarchy, and it was easy to talk to him about the uncertainty this new territory brought.

Three months deep—Karl Nodded solemnly as Jonas spoke of Re-Dev’s eminent production of a replacement esophagus and the overflowing freezer, felt a hard pang in his lower stomach. The surplus was kept in Jonas’ smaller refrigerators, intended for sedatives and anesthetics. This violated protocol and national regulations, though there were no complaints thanks to Jonas’ deletion of all paperwork concerning the existence of the improperly stored waste.

“I’m running low on anesthesia,” said Jonas. “The docs are real close to having that esophagus working right. The recipient only needs to live two weeks with enough signs of recovery before it’s certified production-ready. That’s why you have your work cut out for you in the incinerator this week.”

“No, dipshit. There’s no money saving canine life. Dogs are just what’ve been available. You as me, it’s because of all the snowbirds overburdened by their money and pets. Primates cost too much and PETA’s all over that. And getting a human cadaver with a neck is one in twenty-five. This company should really look into where all those disappeared, deported illegals end up There could be some real money in that.”

Re-Dev’s stipulation with receiving human cadavers was that they got no more than half a body, a quarter of which was allocated to other research facilities or the state universities, so as to maintain an overall air of humane, scientific concern.

“So the docs aren’t sure if the esophagus will even work on a human?”

“Sure they’re sure,” said Jonas, flicking his cigarette, exhaling smoke. “Parts are parts. The thing’s just got to live the two weeks and then we’ll start turning them out in all sizes, using coyotes, dogs, and whatever as templates. Hopefully we’ll get donated a human neck. But if we really require one, one can be got.”

Jonas rubbed his thumb and index finger together, stubbed his smoke on his shoe bottom, and placed it in his shirt pocket. Karl kept his extinguished cigarette as well. Both wanted to avoid any questions that might be raised by the heads if too many butts lay strewn about the doorway, as if this evidence of human activity were unsanitary and bothersome. Back inside, Karl flushed his down the toilet.

Before Jonas left the building, he asked Karl if he ever mentioned their conversations to anyone, a question he’d asked once early on, and which now seemed to Karl to be a formality regarding the sensitive knowledge Jonas had shared about the overflow of dog carcasses.

“Cool, cool. I only ask because of the nightmares I get being around all the testing. Sometimes it doesn’t make any sense and other times it’s perfectly clear.”

“It’s the hacked-up animals in bags that gets to me. Probably, I think ,because there’s so many of them and I can’t tell one piece from another.”

Jonas nodded without looking at Karl, walked away without saying goodnight.

Karl continued through his shift, sweeping floors, doubting that the night would go smoothly. He was indecisive about what metal genre might complement the stripping of the office hallways, which needed to have two coasts of wax reapplied before Friday’s scheduled burn. Previously, he’d decided on stoner rock for bathrooms, hair metal for sweeping and mopping, Eurothrash for emptying garbage, and funeral doom for restocking. But since he’d been hired, he had never once had to strip the floors, especially during the week of a burn. So he mixed the stripping solution and switched out the polishing pad on the buffer to the abrasive black one and decided against listening to any guttural-vocal metal with lyrics about carnage, corpses, or satanic ritual and chose, instead, historical metal about medieval heroics—syncopated triplet riffs, clean operatic vocals—all of which kept his mind focus don his date with Angela and off the number of days left til the burning.

Two weekends earlier, on the second Saturday of September, at a party hosted by his roommate, who insisted they call each other bro-mates, Karl fantasized once more about losing his virginity. Twenty-two pressed him. He believed his maturity level to be higher than it was, each drink bolstering his confidence. He no longer needed to hold out for the right chick. What really mattered was being ready at the right moment, anyplace, like he’d heard from friends who consistently found their way into the bedrooms of more than a few girls, or so they claimed. Armed with a proximal knowledge of hooking up and a woman’s anatomy, thanks to his stack of porno magazines, which rivaled his comics, Karl visualized smoothing his hands along curves, the varying densities of flesh. From those crinkled pages, collaged into memory, he was certain he could seek out pleasure, take swift action when presented with a woman’s naked body.

After he jumped out of his metal-bass stance, he saw her—black dress made of layered lace, which made her brown skin darker, more erotic in its unfamiliarity. Karl had never thought of a Navajo girl sexually, though he’d encountered plenty in high school . He’d always sought the attention of White girls, who shared his skin tone. But what he hadn’t known then was that the musical preferences of these Navajo girls might have afforded him the opportunity to rock out to an album in a room, in a house, with parents absent. The chance that during a dramatic metal ballad, Karl and the melanin-enriched girl might lean close, feel the heat of each other’s mouths, the motion of their bodies, and at the solo they would kiss, follow an arpeggio toward the floor.

Locking eyes with him, she crossed the room, said, “Hey, I’m Angela. You’re Karl, aren’t you?”

“That I am,” said Karl, bowing slightly—scared shitless for having exhibited so much false bravado.

Angela told Karl she’d heard of him, of his guru knowledge and that his pantheon-like room housed an array of metal CDs, cassettes, and posters, his recommendations like those of an oracle. She was impressed his played bass with his fingers and not a pick, which Karl agreed was how real bassists rocked the instrument. Angela told him that she didn’t consider herself a musician, though she’d taken piano lessons as an adolescent, but more of an aficionada—a rogue authority, she liked to think. She loved listening to metal, attending shows, and discovering innovations within the genre. Her favorite band was a Swedish group that mixed black metal with Sweden’s folk standards. Karl admitted they were in his top ten, definitely top five of the European bands, then stalled for words.

The two stared at each other silently. The white noise of the room reverberating around them.

Excerpted from “Before the Burnings” from Sinking Bell by Bojan Louis. Used with permission of the publisher, Graywolf Press. Copyright 2022 by Bojan Louis. 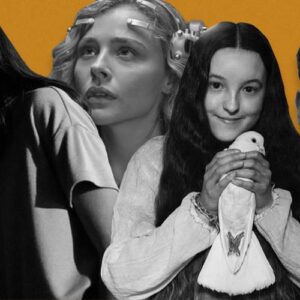 The Literary Film and TV You Need to Stream in October Every month, all the major streaming services add a host of newly acquired (or just plain new) shows, movies, and documentaries...
© LitHub
Back to top