On the Backward-Looking Sexual Politics of Westworld and Ex Machina

“We find ourselves immersed in a world of our own making so intricate,” wrote Philip K. Dick in a 1973 speech, that “a time may come when, if a man tries to rape a sewing machine, the sewing machine will have him arrested and testify perhaps even a little hysterically against him in court. This leads to all sorts of spinoff ideas: false testimony by suborned sewing machines who accuse innocent men unfairly, paternity tests, and, of course, abortions for sewing machines which have become pregnant against their will.”

The speech, titled “The Android and the Human,” goes on for a few thousand words and a few crazy-making fugues: a rant against house alarms; a creepy lament for young mothers; a paean to teen vandalism. As for humans and androids, it’s clear that Dick hated both. Perhaps most famous for his novel Do Androids Dream of Electric Sheep?, Dick often suggested in his fiction that robots could be more humane than humans. Nonetheless, he saw them as agents of the apocalypse, defined by obedience and, “most of all, by predictability.” The idea was that androids, like women, would be too subservient to ever surprise us. They would be boring, in other words. But still less boring than the giddy misogyny of Dick’s glib riff on sewing machines that conflates women with domestic contraptions just real enough to whine about rape.

In Dick’s analysis, boredom is the mood of the mechanized society. It’s also the mood of many of us watching Westworld, HBO’s big-budget drama about an amusement park staffed with sexy, gun-slinging androids. The biggest mystery in Westworld—a show stacked with mysteries—is how it manages to be so tedious. It is, quite literally, the most predictable show on television; Westworld has spawned more fan-theory predictions than anything since Lost, and, as of Sunday, confirmed at least a few of them. A show you can spoil for yourself while hardly watching is a show that hardly demands to be watched. Westworld is co-created by Jonathan Nolan, one half of a filmmaking duo responsible for Interstellar—a spellbinding film that ultimately death-spirals into stoner-philosophy cliché. The series is already following in their footsteps. But ultimately, the show feels boring for the same reasons that Dick’s speech is boring: because its anti-woman, anti-human sentiment is too familiar to feel futuristic. In 2016, science fiction doesn’t have to imagine a better world, but it does have to imagine better androids.

Although Westworld is based on the Michael Crichton-penned film of the same name, it might be more indebted to the most famous adaptation of Electric Sheep: Ridley Scott’s 1982 film, Blade Runner. While Westworld takes its premise from Crichton, its intellectual concerns—if you can call them that—trace back to Dick and Blade Runner, which centered on the inner lives of androids as opposed to their creators.

Blade Runner follows Rick Deckard, a cop in a space-noir landscape pursuing renegade androids on a quest for revenge. Although built like adults, these androids, or “replicants,” are designed to expire after a couple years. The film portrays them as homicidal hard-bodies with the giggly impudence of teens: Roy Batty, the film’s eccentric, electric heart, spends most of the film lolling around a toy store and making out with his girlfriend.

It’s clear, now more than ever, that empathy is no more uniquely human than cruelty is—to believe otherwise is self-flattery at the level of the species.

The clever subtext in Blade Runner is that androids are adolescents, and every cyborg story now feels like a coming-of-age story. It makes sense: androids can’t create conflict until they start hankering for revolt. And much like actual teens, they struggle with questions of authenticity, autonomy, and emotional depth. In Blade Runner, Deckard hunts down AWOL androids by conducting a Turing Test with a Freudian touch, asking subjects a series of inane hypotheticals to measure the authenticity of their emotional response. It’s an empathy exam with a life-or-death result—the subject who reveals a deficit of feeling is exposed as an android and deemed ready for “retirement,” or execution.

There are problems, though, in taking empathy as the measure of men, and especially as the watermark of real women. The willed performance of feeling is what defines an actor, not a person. And it’s clear, now more than ever, that empathy is no more uniquely human than cruelty is—to believe otherwise is self-flattery at the level of the species. The notion that empathy is hereditary has always been costlier, too, for women, of whom the performance of emotion has long been required as an expression of gender. Empathy isn’t stimulated by estrogen or sequenced in the human genome. It’s a form of labor and an act of love, and to imagine otherwise is to efface the emotional work that women often do without reward.

Blade Runner’s outdated theory of emotion might explain some of its stale, Oedipal obsessions: one android opens fire on his interrogator when he’s asked about his mother; Roy Batty gouges his male engineer’s eyes out. It’s still women who suffer most, and are imagined, much like Westworld’s Dolores, as “standard pleasure models,” or “gyroids.” The film is a menagerie of absent moms, bad dads, and scheming prostitutes, and only Roy Batty is allowed a campy coup de grace at the film’s conclusion: on a roof-top, he delivers a soliloquy about rain, releases a white dove into the air, and dies.

But the same corny, sexist psychologizing lives on in Westworld, which suggests that all women, even bionic ones, are defined by emotionality. It’s Dolores’ “unscripted” feelings that hint to her engineers, and to her audience, that she might be self-aware. So does her ability to deceive her handlers and ingratiate men, both artificial and organic. We don’t need another story suggesting that female consciousness begins with feelings and ends with deceit. This story isn’t, as Westworld describes it, “the next chapter in human life”—it’s the oldest story in the book. There’s nothing feminist or futurist about a woman trading a white hat for a black one, switching roles from damsel to desperado. Westworld can’t imagine possibilities for androids—immortal, unprecedented forms of life—more novel than the choice between seducing a man and shooting one.

Blade Runner was one of the first popular narratives to name the existential threat of intelligent machines—to imagine how a personable robot might puncture the hubris of human beings. It was also made over 30 years ago. Westworld cribs its most interesting premise without updating its more dubious propositions. To be fair, this problem isn’t limited to Westworld. It’s common in contemporary android stories, which abound now that popular culture has begun to co-opt identity politics with a canny, compelling cynicism. Feminism is on trend, and an android story functions as a ready-made metaphor for wokeness. There’s nothing all that woke, though, about a show that presents women, universally, as sexy schemers, and hyper-sexualizes nearly every person of color who appears onscreen.

We don’t need another story suggesting that female consciousness begins with feelings and ends with deceit.

Android stories are always about how a naïve subject becomes wise to the system, and thus can be easily shoe-horned into a pre-fab political fable. A cursory tour through android films of recent years suggests as much. Last year’s Alex Garland-directed film Ex Machina is a sleek, sinister reprise of Dick’s scheming gyroids: like Blade Runner, the film is structured around a Turing Test, or an interview between an engineer and Ava, an AI played with ambiguous allure by Alicia Vikander. As a gyroid must, she seduces her engineers before cooly dispatching them. The same happens in Luke Scott’s recent film Morgan, in which a mechanical Mean Girl attempts to murder her handlers in a bid for escape. True: it’s fun to watch. But there are more interesting things to do with cyborgs than conscripting them into a shallow revenge plot against the patriarchy—especially one that demands that they act out misogynist fears before they achieve their freedom. If that’s supposed to be a critique of patriarchy—as I presume Westworld imagines itself to be—it’s a deeply unimaginative one. And science fiction, perhaps more than any other genre, lives and dies by the breadth of its imagination.

The idea of the bionic woman as matriarchal Terminator might have roots in “A Cyborg Manifesto,” a famous essay from the 1980s in which feminist theorist Donna Haraway prophesied that cybernetics, by eroding the boundaries between the organic and inorganic, would also explode the restrictions of gender. But Haraway’s prophesies haven’t been realized, not in our actual world nor in our imagined ones. Science fiction doesn’t have to treat us more fairly than reality, and it almost never does. The genre favors dystopia, and dystopias are rarely democratic. But the problem with TV shows like Westworld and films like Ex Machina isn’t that their vision is too bleak. It’s that they raid the political anxieties of the moment just to reproduce the thinking of the past—all under the guise of exploring the future.

It doesn’t have to be that way, and science fiction has been playing with possibilities for gender since Virginia Woolf’s Orlando, if not even earlier. Ursula Le Guin often peoples her speculative worlds with intersex beings, and the genius Samuel Delany has always used science fiction to interrogate sexual norms. But inventive science fiction isn’t limited to the page. While Spike Jonze’s 2013 film Her feels, at times, like an android story by way of an Anthropologie ad, its AI, Samantha, does what a good android should: something different. She figures out that her new form of consciousness might benefit from new modes of sexuality, expression, and social arrangement—none of which involve killing men.

Science fiction may favor dystopia, but making art is always a utopian enterprise, even if its utility feels uncertain. That’s why shows like Westworld disappoint: they show how a culture can learn to commodify feminism without learning, or caring, to turn it into art. Dick was right to suggest that predictability is as much a political failure as an imaginative one. And for science fiction to be something better than predictable, it needs to show us something about the world that we don’t already know. By now, we know that gender under patriarchy is a Sisyphean struggle against sexual violence and exploitation. This isn’t news, and it isn’t interesting. Even if androids are predictable, our fiction can’t afford to be. 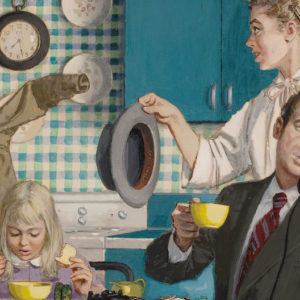 Let me begin with an admission: I don’t know how to write about this. I’ve been trying since Wednesday morning, day after...
© LitHub
Back to top