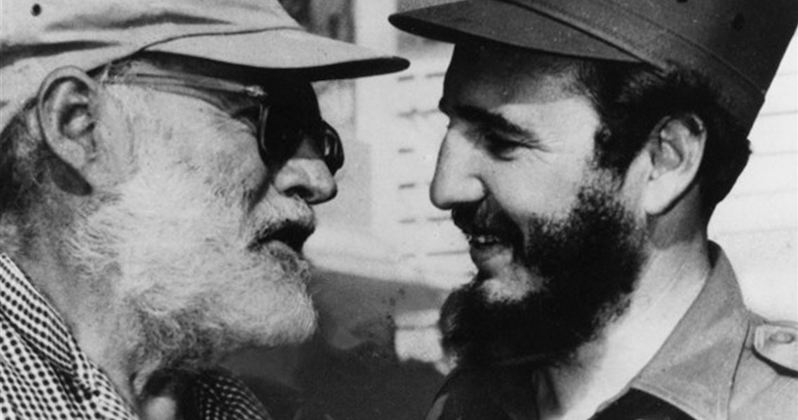 Back in 1986, the Castros helped retrieve Hemingway’s stolen Nobel Prize.

The period leading up to Ernest Hemingway’s 1954 Nobel Prize win was a pretty nightmarish one for Papa. Debilitating health problems (migraines, high blood pressure, liver disease, diabetes), near-fatal accidents (two plane crashes in as many days while vacationing in Africa in ’54 were severe enough that Hemingway spent the next month in recovery, reading his own obituaries) the deaths of old literary friends (William Butler Yeats, Ford Madox Ford, F. Scott Fitzgerald, Sherwood Anderson, James Joyce, Gertrude Stein, and Max Perkins, all between 1939 and 1947) and professional disappoints (two stalled mega-projects and the poor reception of Across the River and Into the Trees in 1950) marred what would end up being his penultimate decade on earth.

By 1952, however, his star was on the rise once again. The Old Man and the Sea, which he wrote in a furious eight-week blitz in the fall of 1950, was a massive critical and commercial success, winning the Pulitzer Prize, garnering a flood of rapturous international press, and sealing for Hemingway the literary world’s most prestigious honor.

Unable to travel to the Nobel banquet in Stockholm due to the injuries sustained in his African plane crashes, Hemingway sent on the following (extremely Hemingway) speech, which was read aloud to the assembled by John M. Cabot, the U.S. Ambassador to Sweden:

Having no facility for speech-making and no command of oratory nor any domination of rhetoric, I wish to thank the administrators of the generosity of Alfred Nobel for this Prize.

No writer who knows the great writers who did not receive the Prize can accept it other than with humility. There is no need to list these writers. Everyone here may make his own list according to his knowledge and his conscience.

It would be impossible for me to ask the Ambassador of my country to read a speech in which a writer said all of the things which are in his heart. Things may not be immediately discernible in what a man writes, and in this sometimes he is fortunate; but eventually they are quite clear and by these and the degree of alchemy that he possesses he will endure or be forgotten.

Writing, at its best, is a lonely life. Organizations for writers palliate the writer’s loneliness but I doubt if they improve his writing. He grows in public stature as he sheds his loneliness and often his work deteriorates. For he does his work alone and if he is a good enough writer he must face eternity, or the lack of it, each day.

For a true writer each book should be a new beginning where he tries again for something that is beyond attainment. He should always try for something that has never been done or that others have tried and failed. Then sometimes, with great luck, he will succeed.

How simple the writing of literature would be if it were only necessary to write in another way what has been well written. It is because we have had such great writers in the past that a writer is driven far out past where he can go, out to where no one can help him.

I have spoken too long for a writer. A writer should write what he has to say and not speak it. Again I thank you.

Now, here’s where things get a little strange.

After winning the Nobel, Hemingway decided that he wanted to gift the 23-karat gold medal to the people of Cuba, off whose north coast his novel The Old Man and the Sea is set. What he did not want, however, was to turn the medallion over to the Batista government. Instead, Hemingway placed his award in the custody of Cuba’s Catholic Church.

For the next thirty years, long after his death in 1961, Hemingway’s Nobel Prize was kept at the sanctuary at El Cobre, a tiny town outside Santiago de Cuba on the island’s southeast coast. Then, in 1986, thieves broke into the sanctuary, smashed the glass case that housed the medallion, and made off with it.

When word of the heist reached the Castros, the revolutionary brothers (who had once dubbed Hemingway “the one Yanqui who would always be welcome on the island”) were not pleased. Raúl Castro—then-Vice President, Secretary of Defense, and Second Secretary of the Communist Party of Cuba—reputedly issued this ominous ultimatum: “Return the medal within 72 hours or face the consequences. I know who you are.”

Lo and behold, within a couple of days the medal was recovered, returned to the church, and hidden away, never to be displayed publicly again.

Sometimes it’s nice to have friends in high places.