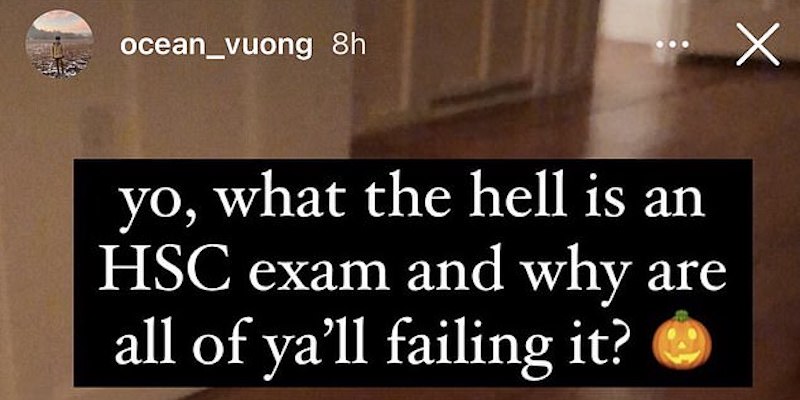 Australian teens bombarded Ocean Vuong on Instagram after his writing showed up on their exams.

Today in things that should definitely not be possible: Ocean Vuong received a torrent of real-time reviews from a horde of confused Australian teenagers on Instagram after they tried to interpret his writing for an exam.

Students in Australia take the HSC exams every year to finish their high school studies. This year, more than 70,000 test-takers in New South Wales were asked to read and analyze passages from On Earth We’re Briefly Gorgeous, including one where the protagonist, Little Dog, plucks grey hairs from his grandmother’s head.

As he plucks, she tells him stories:

…Scenes from the war, mythologies of manlike monkeys, of ancient ghost catchers from the hills of Da Lat who were paid in jugs of rice wine, who traveled through villages with packs of wild dogs and spells written on palm leaves to dispel evil spirits.

There were personal stories too. Like the time she told of how you were born, of the white American serviceman deployed on a navy destroyer in Cam Ranh Bay. How Lan met him wearing her purple áo dài, the split sides billowing behind her under the bar lights as she walked. How, by then, she had already left her first husband from an arranged marriage. How, as a young woman living in a wartime city for the first time with no family, it was her body, her purple dress, that kept her alive.

Students’ thoughtful feedback to the moving passage included “Wtf was ur text about?” and “BROOO FFFSSS FAM we gonna fail because of u now why did you make that text. Wat was it bout. Bro.” Bro, indeed!

As students messaged him on Instagram, Vuong posted, “yo, what the hell is an HSC exam and why are all of y’all failing it?”

“Ur text was something we had to write abt, but bro what the **** was it about,” one of them replied.

To him, Vuong only offered the only possible reply: “Hmmm. Aboutness I too am haunted by it. Sorry, lad.”