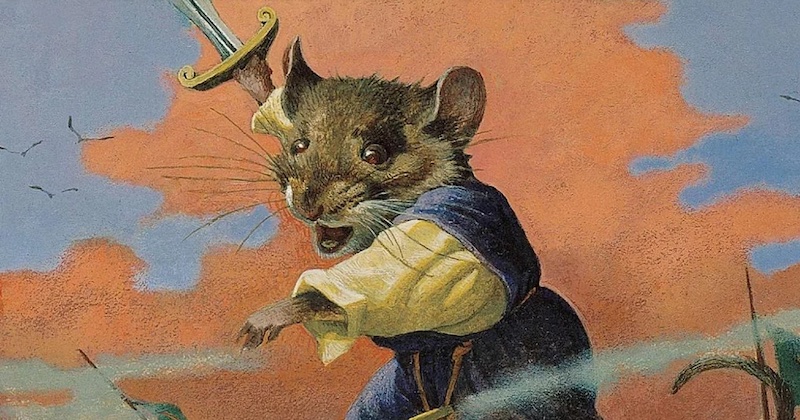 Yes, it’s true: Netflix has picked up the rights to the entire Redwall universe: the beloved series of books by Brian Jacques (which I am sorry to tell you is pronounced “Jakes” and not the cool French way that naturally follows Frère and that I used for years until being rudely corrected by a dorky bully who may or may not have been my dad) in which vaguely medieval mice have elaborate, mouthwatering feasts and sometimes also do battle.

According to Deadline, this is the first time that a single company has held film rights to all of the books at once, and Netflix is shooting their shot by developing an animated feature film, to be written by Patrick McHale, and a TV series based on the life of Martin the Warrior. (As someone who once dressed up as Martin the Warrior for an extremely cool and detailed school presentation, I am cautiously optimistic but will also be a very harsh critic, so good luck Netflix.)

The books were adapted into a Canadian (?) animated TV series in the late 90s/early 2000s, but I have never seen it (I didn’t have TV then, which is why I’m like this). Apparently Tim Curry was the voice of Slagar the Cruel and Alison Pill was Cornflower? I guess I now have something to do with the rest of my quarantine, and yes, I mean watch children’s television about mice. Listen, all the books are at my parents’ house and I can’t go there for fear of killing them, because it’s 2021.

Anyway. The more good children’s programming we can get out there, the better, especially with the extra strain on parents during the pandemic. But also important is the fact that it seems like Netflix, our cultural overlords, will finally have answer the age-old question that has been plaguing souls for time immemorial (or like a month, depending): is Redwall a mouse-sized abbey or a human-sized abbey?