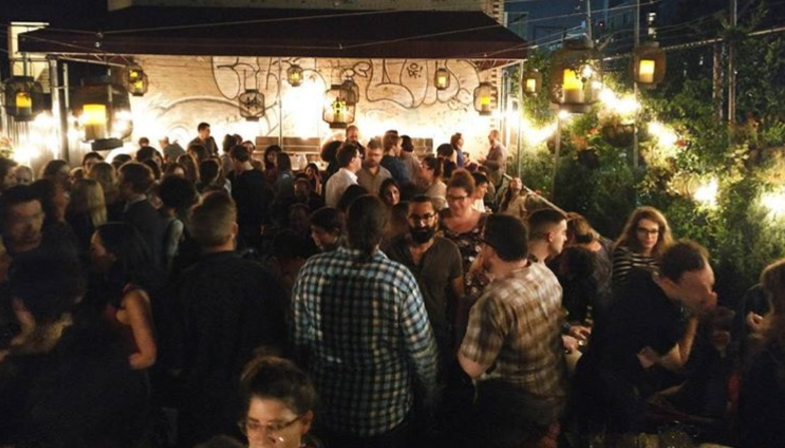 “It’s like spring break for writers!” Alison Hart said to me when she came up onto the rooftop of Night of Joy around ten o’clock on Thursday night. It was crowded, and airy, and everyone was drinking frozen margaritas and water cups of rosé—

I’m just starting there so that you don’t think a multi-party BookExpo recap is going to end at a point of exhausted despair. After a dozen other parties over the course of two days, I was still managing to enjoy myself.

Book Expo is largest annual book trade fair in the United States. Like many things in the book world, it’s also an excuse to throw an exorbitant amount of parties. Literary Hub thought this was the perfect opportunity to see just how far they could push their party correspondent. Hence the challenge: to try to send me to as many parties as possible across the two days of BookExpo celebrations.

The first stop was the Random House party at Cantina, far west into midtown. It was a rare day of perfect weather, and the beautiful rooftop bar was decorated with books scattered around as if they were growing out of plants. I saw Louisa Ermelino of Publishers Weekly, wearing a bright purple watch, who said she was following John Maher on his party stops. They asked where I was going next, and I said I was waiting for the schedule my editor was to give to me when she showed up, for my choices were no longer my own.

Michele Filgate was wearing a pretty ruffled dress with stars all over it, stopping by on her way to teach a Catapult class. She introduced me to Emily Russo, owner of the bookstore Print, who was in town from Portland. I went to get another one of the signature drinks, which were publishing themed–I skipped the Summer Friday in favor of the Corner Office (margarita, on the rocks or up) and saw Markus Dohle leaning on the bar. He opened his blazer and showed me the two pocket-sized books he had inside: Resistance, Rebellion, Life: 50 Poems Now & On and Tyranny: Twenty Lessons from the Twentieth Century. He said he gave one to Obama last week, and I wasn’t sure if he was joking until he pulled out his phone and scrolled through the evidence, the two of them shaking hands and smiling. Well, I thought, my interactions might be downhill from there.

This was not, in fact, the case; I spoke with Ariel Levy soon after, who told me she’d never heard of BookExpo until that day, “but it’s fun! I like it!” Jenny Zhang was drinking something she didn’t order, but was too kind to return, in over-the-knee boots and bright green hair. I asked Ta-Nehisi Coates what he thought about BookExpo so far, and he said he didn’t know how anyone ate or drank at these things, being that you’re always supposed to be networking. I told him I had eaten a mini cheeseburger before and then had to reapply my lipstick; it was a whole thing. I did not reveal that I’d already had two Corner Offices.

Next up was the indie press party at Tropical 128. I walked past the fish tanks in the front of the tropical-themed bar to get a beer in a plastic cup. I joined a conversation Meakin Armstrong and Katie Raissian were having about boat parties: yay or nay. Katie is against them unless they are docked. Meakin, a water sign like me, is all for drinking on the water, and I agree! More drinking on the water, please.

On the walk to the next party, we passed an outdoor gathering in a garden and asked Jonny Diamond, Lit Hub’s Editor-in-Chief, if we could go in. “It’s not literary,” he said, and on we went to the Slipper Room for Oxford University Press’ event. I’d never been, and it was narrower than I’d expected (maybe because I was thinking of the Mad Men pilot), but the ceilings were high, and it felt hidden. They chose this location in part to celebrate a new book they have coming out, The League of Exotic Dancers. The editor of said book, Norm Hirschy, stole the sartorial show in a sequined black blazer and silver shoes. He also lifted up his sleeve to show me a thick diamond bracelet, which he said he likes to carry around for when he wants to dress up.

Off to celebrate HMH books at a crowded, jubilant Housing Works. Justin Taylor showed me his tie-dye bracelet from the Bookforum party, one that I missed (how do we have enough people to populate all these parties on the same night?). Catherine LaSota lamented that she showed up just in time for the lights to turn on. Let’s be clear, it was a time of night when none of us wanted to be under bright lights. We took the hint and got in a cab for The Paris Review. That party had started hours ago and was dwindling when we arrived, but there was still a pool game, a bar of gin and whiskey and sliced cucumbers, and we had one last drink. Just kidding, then we trekked to Clandestino for our real last drink of the night, joining a table of friends from two or three parties/lifetimes ago.

The next day was beautiful: sunny, breezy, the kind of day where you want to abandon all responsibilities and loved ones and sit outside. I tried to tell myself that my very long walk to the Javits Center was kind of like a pleasurable stroll where I could enjoy the weather? Huge charmless convention centers like that make me nervous, but luckily I got there at 4:45, the time of day when everyone starts drinking alcohol inside of it. There were bottles of wine everywhere and a huge line at Hachette for what looked like bellinis or mojitos. I went for the cheap red wine with screw-on tops I saw at smaller stands. I get some from Spencer Williams at Talon Books, who was stretching when we walked up (BookExpo is a marathon for everyone involved); he said he’d been wearing his Lit Hub tote for 365 days since the last BookExpo.

Coffee House took it up a notch by pouring whiskey for everyone. “What kind of cats are on your dress?” I asked their publicist, Mandy Medley. “Jaguars?” She suggested, but she liked to call it her Stephen Florida dress, even though the cat on that cover is a lynx. Mark Doten stopped by but was on his way out to Bed, Bath, and Beyond. I thought about how nice it would be to go shopping for sheets a little buzzed, but that wasn’t in the cards for me.

Next up was the Columbia, Fordham & NYU presses’ party at 44 1/2 in Hell’s Kitchen. I enjoyed the contrast between the fairly conservatively attire of the publishing crowd and the slightly risque uniforms of the servers, who wore shirts that said things like “whipped” on one side and “beaten” on the other, as they walked around with bottles of prosecco, refilling flutes.

I was supposed to go to the People party at PhD in the Dream and stop by the New Directions party at their office, but I got caught up talking to Dan Sheehan and Katie Raissian. The last stop of the night was a Guernica, Literary Hub, and Joyland party, which I was supposed to be co-hosting, and I didn’t feel I could be that late. We dropped Katie off at the New Directions party (I asked her to be my proxy party correspondent but still haven’t heard back) and jumped on the L.

We were in a competition with our resident Virgo, Jess Bergman, about whether we could arrive on time to our own party, and we did. How could a party begin on a better note than by proving a Virgo wrong? The No Tokens crew was there, including the illustrious Annabel Graham and T Kira Madden. Someone asked how I knew Ben Fama and I said, “we’re fair-weather friends.” Ben pointed out that it was “really nice outside tonight!” I saw Alex Tanner and Sasha Fletcher and congratulated Alex on her Center for Fiction fellowship, and Sasha on the fact that now he can just sit back and enjoy his girlfriend’s success. Ian MacAllen couldn’t help but bring up the apocalyptic nature of the day (probably don’t need to specify which apocalyptic thing happened, each day there’s more) and that it reminded him of Station Eleven. After Pete’s Reading Series got out, Brian Gresko, Mira Jacob and Alison Hart walked up, as well as Jessie Chaffee (who had just read) and Brendan Kiely. It was a pretty idyllic start to summer, to be stationed on a rooftop as it turned into midnight, with more writers showing up at each hour. I stayed for four or five hours, and let’s be honest: it was a nice respite to stay at a party for more than forty minutes. 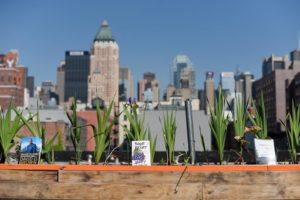 Books atop the Cantina rooftop for Random House 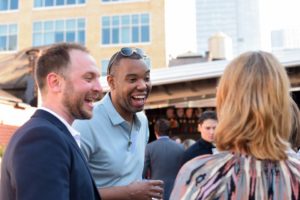 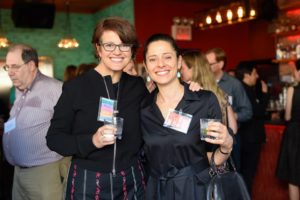 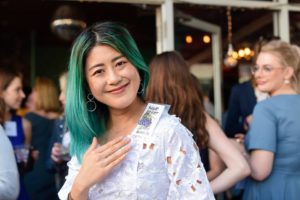 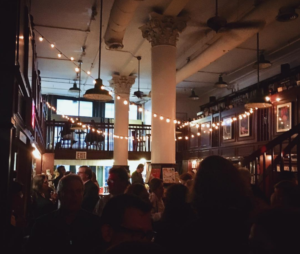 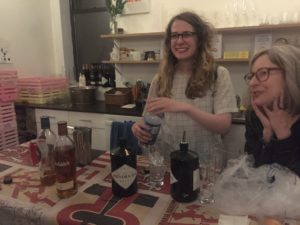 Bartending at the Paris review 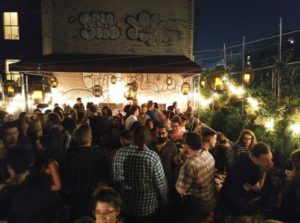 Guernica, Literary Hub, and Joyland at Night of Joy 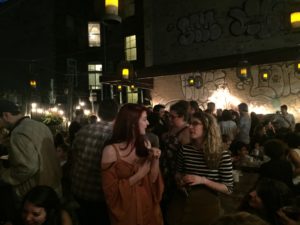 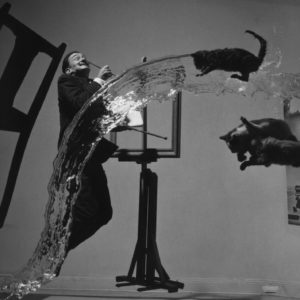 Whereas Surrealist art and film have achieved widespread success, Surrealist poetry has languished in their shadow. While...
© LitHub
Back to top
Loading Comments...