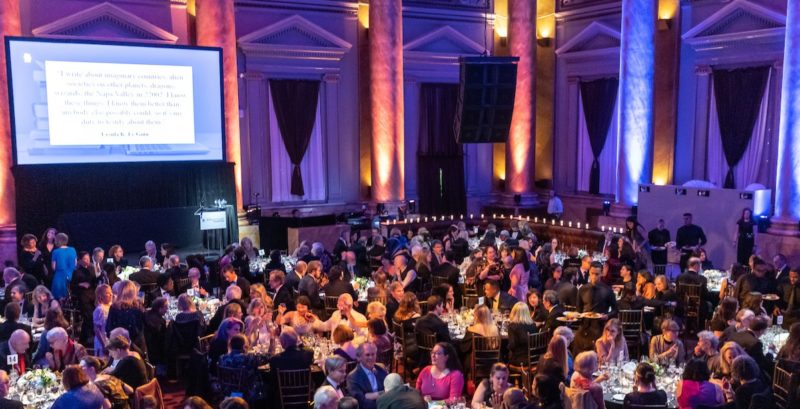 The most best remarks at the 27th-annual Authors Guild benefit technically came from someone who wasn’t there: the seven-year-old who wrote Mary Pope Osborne her first piece of fan mail.

Osborne recounted to the audience of authors, donors, and other members of the literary community that soon after her first Magic Tree House book was published, the young reader wrote to her: “I’m also writing a book. It’s really scary, but I’m not done.” (Sound familiar?)

The benefit honored Osborne along with New York Public Library President Anthony Marx, and Rep. Hakeem S. Jeffries for service to the literary community at a ceremony where many called on that community to respond to attacks on education and democracy.

“Creativity, access, fact, empathy—all of them are the basis, the foundation of liberal democracy,” Marx said. “All of those values, all of them, are under threat now in my country and in the world at a level I have never seen and never expected to see.”

To that end, speakers emphasized the importance of supporting authors financially in the midst of increasingly dismal numbers. Last year, the guild released an author income survey showing that the median author income has fallen by 42 percent in the last decade, a statistic Authors Guild executive director Mary Rasenberger referenced in her remarks. “How many talented young writers aren’t writing books because they can’t afford to?” she asked.

In response, the guild has begun a campaign to support a public lending system that compensates authors for their work. The guild is also contributing to lobby efforts for the CASE Act, which was introduced to the House this month and would create a more accessible pathway for authors to pursue copyright infringement claims.

Jeffries, who co-sponsored the measure, said in videotaped remarks that it would help ease the process for writers whose copyright has been violated. “Federal court is often too expensive for these creators to enforce their copyright. This leaves many authors and writer without a remedy when their work is stolen,” he said.