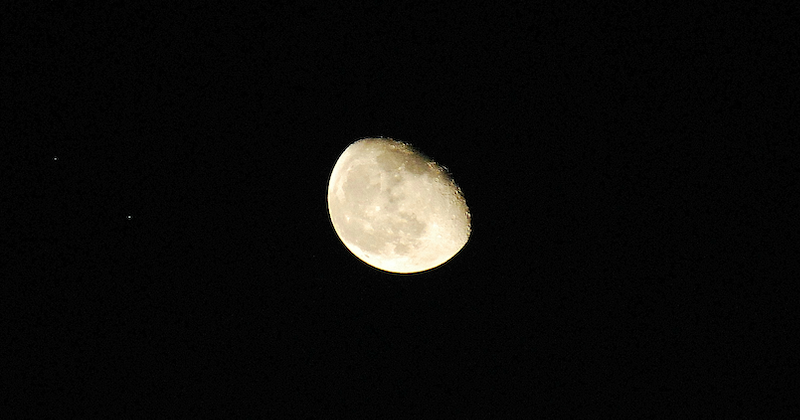 Astronomers have determined the exact hour that Mary Shelley thought of Frankenstein.

It’s a well known fact that an 18-year-old Mary Shelley (then still Mary Wollstonecraft, after her mother) wrote Frankenstein at Lord Byron’s house (actually a rented mansion on Lake Geneva) after the poet, during a streak of bad weather, challenged his house guests to write their own ghost stories. “I busied myself to think of a story,” Shelley later wrote an an introduction to her famous novel.

—a story to rival those which had excited us to this task. One which would speak to the mysterious fears of our nature, and awaken thrilling horror—one to make the reader dread to look round, to curdle the blood, and quicken the beatings of the heart. If I did not accomplish these things, my ghost story would be unworthy of its name. I thought and pondered—vainly. I felt that blank incapability of invention which is the greatest misery of authorship, when dull Nothing replies to our anxious invocations. Have you thought of a story? I was asked each morning, and each morning I was forced to reply with a mortifying negative.

But then one night, when she had gone to bed late—after “the witching hour had gone by”—it came to her. “When I placed my head on my pillow, I did not sleep, nor could I be said to think,” she wrote.

My imagination, unbidden, possessed and guided me, gifting the successive images that arose in my mind with a vividness far beyond the usual bounds of reverie. I saw—with shut eyes, but acute mental vision,—I saw the pale student of unhallowed arts kneeling beside the thing he had put together. I saw the hideous phantasm of a man stretched out, and then, on the working of some powerful engine, show signs of life, and stir with an uneasy, half vital motion. Frightful must it be; for supremely frightful would be the effect of any human endeavour to mock the stupendous mechanism of the Creator of the world. His success would terrify the artist; he would rush away from his odious handywork, horror-stricken. He would hope that, left to itself, the slight spark of life which he had communicated would fade; that this thing, which had received such imperfect animation, would subside into dead matter; and he might sleep in the belief that the silence of the grave would quench for ever the transient existence of the hideous corpse which he had looked upon as the cradle of life. He sleeps; but he is awakened; he opens his eyes; behold the horrid thing stands at his bedside, opening his curtains, and looking on him with yellow, watery, but speculative eyes.

I opened mine in terror. The idea so possessed my mind, that a thrill of fear ran through me, and I wished to exchange the ghastly image of my fancy for the realities around. I see them still; the very room, the dark parquet, the closed shutters, with the moonlight struggling through, and the sense I had that the glassy lake and white high Alps were beyond. I could not so easily get rid of my hideous phantom; still it haunted me. I must try to think of something else. I recurred to my ghost story,—my tiresome unlucky ghost story! O! if I could only contrive one which would frighten my reader as I myself had been frightened that night!

Reports have differed as to how long it actually took Shelley to come up with her story—one night? three?—and some scholars have questioned Shelley’s timeline. But ten years ago, astronomers at Texas State University used astronomical tables and topographic measurements to pinpoint the exact hour that fateful vision came to her. Like any good legend, it all hung on the position of the moon. Texas State astronomy professor Donald Olson, along with two colleagues and two students, visited Lake Geneva in August 2010 to figure out when, exactly, Shelley’s moonlight would have struggled against her shutters. “There is no explicit mention of a date for the ghost story suggestion in any of the primary sources—the letters, the documents, the diaries, things like that,” Olson said. “Nobody knows that date, despite the assumption that it happened on the 16th.” And indeed, they determined that it would have been between 2am and 3am on the morning of June 16, by the light of a gibbous moon, which would, by then, have cleared the hill outside her window.

“Mary Shelley wrote about moonlight shining through her window, and for 15 years I wondered if we could recreate that night,” Olson said. “We did recreate it. We see no reason to doubt her account, based on what we see in the primary sources and using the astronomical clue.”

So as we enter the spookiest season, keep an eye out for your own gibbous moon of inspiration—and any hideous phantoms it may bring.