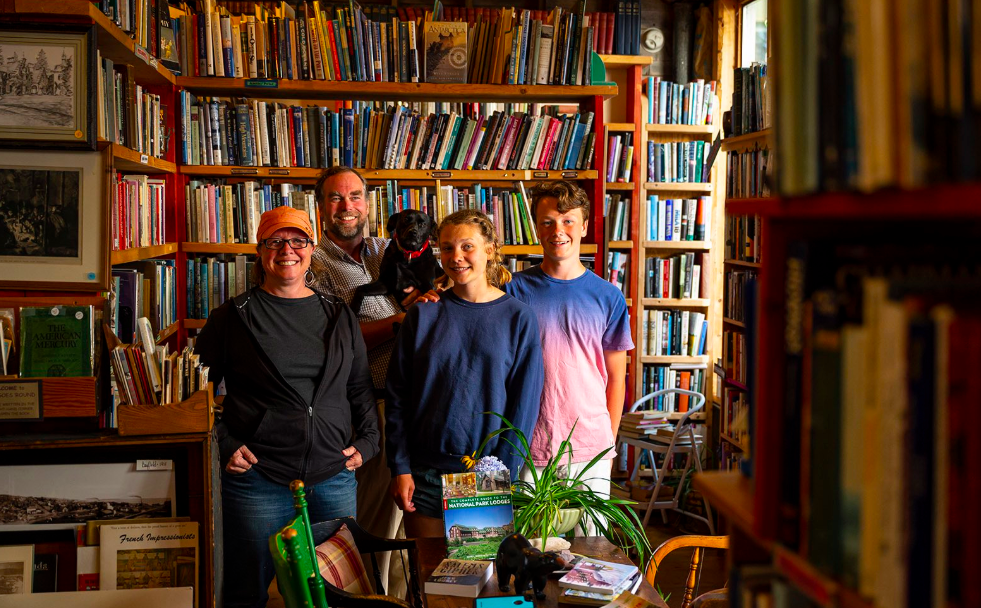 Buried deep within the alluvial silt of Twitter’s great and brackish tidal id one discovers, every now and then, a gem pure and bright. So it was I came across this thread from Bayfield, Wisconsin resident Julie Buckles, telling the story of her impulse buy (!?) of used bookstore, What Goes Round, after hearing Tracy K. Smith on the radio. And instead of just embedding all her tweets (some of which you can read below), I got in touch with Julie to find out what the hell, exactly, transpired that night.

Anyway, I went to my favorite used bookstore and talked to Howard about poetry. He didn’t have any Tracy K Smith but as I was about to walk out the door he said, “you may be interested to know Nathan is selling the store.” pic.twitter.com/Z6CCkW1189

Were you a regular at What Goes Round?
Yes, my husband and I have been regulars at What Goes Round since we moved to the region 25 years ago. We loved going in and talking to the original owner Steve Dunker—a deep thinker and good person. He was deep into philosophy and Eastern religion. When he died ten years ago, Nathan Meyer (who had known Steve since childhood) and his wife Ann bought the store. Ann died suddenly two years later. Since then, a devoted group of employees—all who knew and loved both Steve and Ann—have been running the store day-to-day.

Howard Paap, a retired professor of anthropology, has been a steady presence. Charly and I loved to stop in and say hello to Howard and talk books. He always has great recommendations on every subject. Howard is 84 and says he has things he still wants to do, like a write a book about his 15 year as a bookseller. He says he’ll stay at the store for the next six weeks but beyond that he’s not committing.

Had you ever imagined buying a bookstore, let alone a small retail business?
No! I think every writer, maybe every reader, has fantasized about owning a bookstore. I’ve certainly spent my share dreaming about “my” bookstore but I never, really thought I would actually own one. This truly was a case of timing. The Tracy K. Smith interview struck something so deep inside that I still tear up. Like a lot of people, I’ve had a wrestling match going on in my head about how to respond to these times—and I’ve felt a bit catatonic to be honest. I’ve barely written anything since the fall of 2016—and yet I look around and see people responding in the most beautiful ways. I think I thought in that moment, this is my response. It doesn’t make sense financially or otherwise but it feels right. I’ve always been community builder and I’ve started and organized community events like the Bay Area Film Society and WritersRead—owning a bookstore is an extension of all that. And the beauty is, I have my immediate and extended family behind me.

What was the real-time thought process like with your husband, about diving in?
My husband shares my values. I don’t think he feels this as passionately as I do, but he’s in for the adventure. And after twenty years of marriage, he knows when to get on board and when to put on the brakes. The financial risk is not huge—we don’t own the building and the store has basically run at breakeven—so the discussion was really around do we have the time. I work full-time as the director of communications at Northland College; he’s a full-time forester. We have two teenagers. Fortunately, they are both incredible readers (and even prefer print), and their eyes bugged out when they heard the news. Then I talked to my parents, who infused the love of reading in me, and they said they would provide some seed money. So, as a family project, this is a no-brainer.

Any thoughts on changes for the store?
We changed the name but will not be making big changes within the store. [Honest Dog Books, Buckles explains, is named for the term used by mushers to describe a sled dog that never quits] It has a great vibe and Steve Dunker was a genius with utilizing space—he built all the bookshelves inside the store. The initial changes will be more around marketing, as the store did not have a website or social presence. I’m creating a website plus the social channels. This is what I do at my day job and for me, it’s a lot of fun. We’ll focus on the brick and mortar in the first few months and then move into online for rare(r) books. I’ll likely build out sections that fit my interests—dogsledding, outdoor adventure, memoir, Native American—and each family member has plans for “their” sections: Charly—aboriginal, Arctic, philosophy. Thirteen-year-old Jackson—young adult. My sixteen-year-old daughter is a voracious reader of fiction—everything from Moby-Dick to Slaughterhouse Five to Stones from the River, to name a few recent reads.

What are you most looking forward to about the idea of bookstore ownership?
The chance to curate! I’ve spent my whole life recommending books. Now I have the chance to create an experience for people who wander into the store. To talk books all day long. To host authors and events in my small space (it has a beautiful back outdoor patio so I’m already imagining summertime music and readings). To explore books I’ve never heard of. My husband and I are having a tough time right now as we work our way through thousands of books because we’re interested in everything. It’s hard to just price a book and move on. So, it’s slow but fun and we’ll get there.

The reaction has seemed lovely—what kind of advice have you received so far?
The reaction has made my heart so full. There are so many book lovers out there and that makes me incredibly happy. A few bit of wisdom have come from other bookstore owners in the area: From Richard, the book they’re looking for is the one you will not have. From Nathan, don’t take every book offered. From Howard, people travel from all over for this bookstore. They all have a reason for coming and they’ll want to tell you there story.