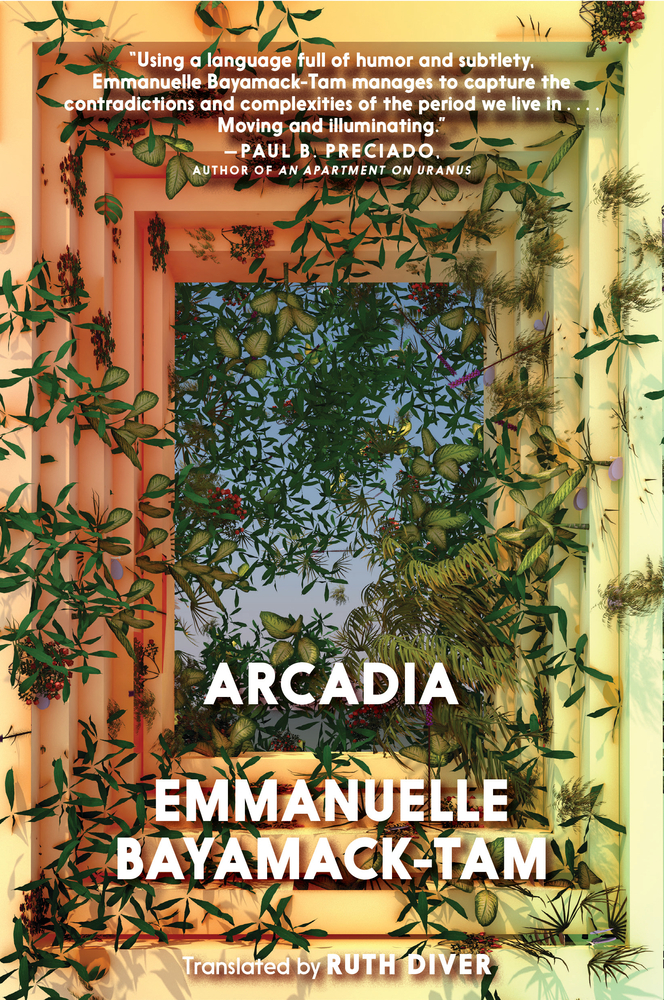 The following is excerpted from Emmanuelle Bayamack-Tam's novel, Arcadia, translated by Ruth Diver. Bayamack-Tam has published twelve novels and two plays. She is a founding member of the interdisciplinary association Autres et Pareils and co-director of Éditions Contre-Pied. Arcadia, her first book in translation, won the Prix du Livre Inter; was shortlisted for the Prix Femina, Prix Médicis, and Prix de Flore. Diver has translated works by several of France's leading contemporary novelists, including Adélaïde Bon.

We arrive in the middle of the night, after an exhausting trip in my grandmother’s Toyota hybrid: of course we had to drive halfway across France, avoiding high-voltage lines or cell-phone towers, and enduring my mother’s wailing, even though she was swaddled in shielding fabric. I don’t remember much about the welcome we received that night or my first impressions of the place. It was late and dark, and I had to share my parents’ bed because a room wasn’t ready for me yet. But I do remember everything about my first morning at Liberty House, about the moment dawn slipped through the weighted curtains without really pulling me out of my slumber.

Sleeping on their backs, their hands loosely crossed on their laps, with satin masks on their wax faces, my parents are lying on either side of me like two peaceful funeral effigies. This peace is something I’ve never felt with them before. Day and night, I’ve had to live with my mother’s suffering and my father’s tortured worrying, their permanent and sterile unrest, their convulsed faces, and anxious discussions. And so, although I’m impatient to get up and discover my new home, I stay here, listening to their breathing, making myself small, so I can bask in their warmth and luxuriously share their bed.

Cheery trills come in from outside, as if the invisible spar­rows in their nests shared my joy at being alive. This is the first morning, and I am new too. I finally get up, quietly get dressed, go down the marble staircase, and notice in passing how the steps are worn in the middle, as if the stone had melted. I respectfully clutch the oak handrail, itself polished and darkened by the thousands of moist hands that grasped it, to say nothing of the thousands of young thighs that trium­phantly straddled it for an express launch down to the entrance hall. As I touch the varnished wood, I am assailed by suggestive visions: Mädchen in Uniform, kilts hiked up over legs sheathed in opaque woolen stockings, braided hair, girls’ high-pitched giggles. There is something here—connected to the place itself and its impregnation with a century of pubertal hysteria and Sapphic friendships—but I will understand the reason for this only later, when I learn the original purpose of the building I’ve just moved into. For now, I’m happy to tiptoe down the staircase and inhale the smell of something like religion in the wide hall with its checkerboard floor. Yes, it smells like wood polish, parchment, melted wax, and devotion, but I couldn’t care less: I’m outa here, into freedom, the invigorating fresh air and evaporating dew, the early morning all for me.

Arcady suddenly appears on the majestic front steps, with their intricate cast-iron awning, and finds me immobile, dumbstruck by so much beauty: the soft slope of the pine woods, the blueberry bushes, the powdery rays of sunshine fil­tering through the trees, the veiled call of a cuckoo, the furtive scamper of a squirrel over a bed of moss and leaves.

I don’t have to be told twice, and scamper off too, towards the magic pulverulent light under the huge trees, looking for that invisible bird whose cooing echoes my own feelings so well. But then it isn’t long before I run into my grandmother, plunged into perplexed contemplation of a mound of crumbly earth at the foot of a pine tree. She hardly even glances in my direction:

“What do you think this is? A grave? It looks like someone dug it recently. I’m not at all sure about all this, that house, that Arcady . . .”

I would be happy to play along with my grandmother’s gruesome speculations if she weren’t naked as a jaybird in the greenery. A nudist to her very soul, she doesn’t miss a chance to strip off, still I was hoping she might have waited a little longer before dropping her sequin dress. As for me, I’m used to seeing Kirsten wander around in her birthday suit. One of my first memories is finding myself face to face with her vulva when I was coming out of my bedroom. My eyes were at about the same height as the industrial-grade piercing on one of her outer labia, a kind of golden rivet, which was so attractive I couldn’t stop myself from yanking it firmly, thereby causing an under­standable howl:

Since I must have been about three years old, I pulled even harder on that fascinating object. Bang, first memory, first slap. I howled too, causing my panic-stricken parents to rush in. Immediately assessing the scope of the drama that had just played out, Marqui hauled me up into his arms with dignified reprobation:

“Kirsten, for pity’s sake, go put some clothes on, I dunno, some panties, a T-shirt, something! You’re just impossible!”

“We’re all family here! I don’t have to cover up for my own family, do I? And she really hurt me, the silly goose!”

“Serves you right: next time, try to avoid provoking little children with your hardware!”

My grandmother retreated, full of contrition, but the lesson didn’t stick; she persists in exhibiting her skeletal and dilapi-dated anatomy, which clearly has nothing obscene about it, for the simple reason that it no longer has anything human about it. It takes a lot of imagination to figure how that mangy pubis, those ochre teguments, that pallid sagging flesh, that network of veins with their scaly serpent-like appearance once belonged not only to a woman but to one of the beauties of her gener-ation. And her bust. . . . Having always proclaimed that bras were lethal for breasts, she doesn’t seem to realize that hers now flow parallel to her torso, with her nipples at the end of their tethers twelve inches away from their birthplace and swinging from side to side with her every move.

It’s no use chiding my unruly grandmother, so I squat down meekly in front of the freshly dug grave and crumble up some clumps of soil before formulating a hypothesis:

“Maybe it was an animal that did this?”

I hardly know what a mole is, and even less what a guru is, so I hold my tongue, as I often do with Kirsten, who has ideas about everything and is constantly lashing out with her firmly held opinions. Regarding Arcady, my own opinion isn’t quite formed yet, but since he has just saved my mother from certain death—a slow-burning extinction in the terrible suffering of electromagnetic hypersensitivity—I’d like Kirsten to give him a break, so I hazard to ask her:

“Well, why d’you come then, if you don’t like Arcady?”

She turns on her heel towards Liberty House. The passing years have taken nothing away from her majestic poise—she still walks like she’s on a catwalk, no doubt unaware of the spectacle offered by her lumpy wobbling triceps and melting buttocks. Once she gets within sight of the house, she vaguely drapes her sequin dress around her body, but it won’t be long before I realize that I needn’t worry about the impression cre­ated by my grandmother’s nudity within the walls of Liberty House—its inhabitants all live in nostalgia for Paradise before the Fall.

I’m left alone with the unresolved mystery of the earth mound and that other great mystery, for me, of this stretch of Mediterranean forest, with its scaly tree trunks, rustling foliage, scents of resin, and fauna on high alert at my slightest move­ments. This forest is mine, Arcady gave it to me. The fact that it is nothing more than the grounds of a large country estate doesn’t even cross my mind: for me, it’s an unexplored jungle, whose administration I take very seriously. I signpost my paths, mark my trees, and take a census of my subjects: the pipist­relle bats, the longhorn beetles, the wood-boring beetles, the chickadees, the caterpillars, the slowworms, the foxes. . . . Not a day goes by without my making another magical discovery: red toadstools with white spots, startled rabbits standing stock-still, wild blueberries and strawberries, clouds of midges in midair above a path, a jay’s feather with perfect black and blue stripes, which I tuck into my pocket as a talisman.

As for the mystery of the earth mound, it is solved a few days later, when my family and I are invited to the setting of a headstone at the foot of the great cedar, for the dogs of Liberty House are entitled to their own funeral rites. What a pity, I wish I could have led an investigation, taken charge of a midnight exhumation, dug up human bones or at least a buried treasure of doubloons and pistoles. But there are too many mysteries left unsolved at Liberty House for me to waste my time feeling sorry that the key to this one was given to me. My childhood has just taken a new, unexpected, and enchanting turn, and I can feel it, as I stand over the tomb of this unknown dog, this sense of jubilation and happy expectation rising up inside me. All I have to do is look at my mother’s face, free at last of its beekeeper’s veils and spasms of pain, to feel sure that my great expectations will be justified.

Excerpted from Arcadia by Emmanuelle Bayamack-Tam, translated by Ruth Diver. Excerpted with the permission of Seven Stories Press. 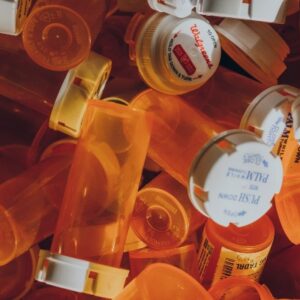 How Arthur Sackler Got America Hooked on Opioids Open Source is the world’s longest-running podcast. Christopher Lydon circles the big ideas in culture, the arts and politics...
© LitHub
Back to top