Apprenticed to Venus: My Secret Life with Anaïs Nin

The following is from Tristine Rainer’s novel, Apprenticed to Venus: My Secret Life with Anaïs Nin. Set in the underground literary worlds of Manhattan and LA during the 60s and 70s, Tristine charts her coming of age under the guidance of Anaïs Nin. Tristine Rainer is the author of The New Diary and Your Life as Story. Rainer taught creative nonfiction in the USC Masters Program, and is director of the nonprofit Center for Autobiographic Studies.

A dry crack of laughter came from the back of Anaïs’s throat. “I believed my absurd double marriage could not last a year, and it has lasted a decade.”

I quickly calculated: when I’d met Anaïs in 1962, she’d already been a bigamist for seven years! I was excited by her daring. She was an outlaw like the bad boys I’d always been keen on, dangerous and sexy because they took risks and defied convention. I loved her terrible secret; she’d beaten the system of marriage that kept women down, and now that I knew it, she would have to keep me close.

Her penciled eyebrows pinched irregularly and her eyes sought mine. “Now I’m dangling from the trrapeze by a thread and I need your help!”

“I’ll help you,” I responded. “I think it’s great that you’re a bigamist!”

“Please don’t use that word.”

“Why not? I think it’s fantastic!”

“It’s an ugly word. And besides it’s illegal.”

“Well, smoking pot is illegal, but I know a lot of people who are doing it. So is refusing military service, but it shouldn’t be.”

“So you don’t think I’m terrible now that you know?”

“Terrible? I’m awed by you! I’ve never heard of a woman with two husbands. Only men have done it until now.” I thought her adventurous leap beyond women’s traditional roles as remarkable as walking on the moon. She may not have been a great writer, but she was a pioneer, a breaker of boundaries, a daring explorer!

I could see that she was pleased that I’d recognized her extraordinary courage, but she cautioned in a hushed voice, “You must never reveal it. People don’t understand.”

“Well, I understand,” I said, pleased that I was uniquely qualified to do so. She had figured out how never to be abandoned, never caught short of a man. “It’s because your father abandoned you like mine did. By having two husbands you’re protected. You’ll always have a spare.”

“No. I can’t leave either man because I know how it feels to be abandoned. I couldn’t inflict that on someone I love. I’m trapped by my compassion.”

She looked completely sincere, but to me, an extra husband as an insurance policy remained a much more compelling reason.

To emphasize her more altruistic perspective, Anaïs asked, “Don’t you recall the terrible pain when your father left? Could you cause someone that pain?”

“No,” I said uncertainly. “But remember I told you I was glad my father left.”

She was scrutinizing me. “If you cannot understand the cruelty it would wreak on Hugo and Rupert to learn of my double life, how can I trust you to keep my secret?”

“Because I gave you my word.” I looked her in the eye. “Once I give my word I’ll never break it. It’s a matter of honor.”

“At twenty-one, you haven’t had much opportunity to test your honor.”

“Yes, I have. For some reason people have always told me secrets, and I always keep my word.”

“What secret did someone ask you to keep?” She leaned into me conspiratorially.

I thought about it. Which secret could I tell that wouldn’t harm anyone and might also impress her? “That my father was Jewish.”

“Did someone ask you not to tell that?”

“My father. I found out by accident when I was sixteen, when an aunt I’d never heard of came to see a play at the Coronet Theater and recognized my name on the program. She took me out to Canters Deli after the play and told me my father had broken off from his Jewish family and changed his last name. I was thrilled to find out I was half Jewish, because my best friend was, but when I talked with my father about it, he told me never to tell anyone.”

“And now you have just told me.” She gave me a hard smile.

She had caught me!

Finally, I thought of what to say. “My relationship with you is different. I took an oath with you. We’re now like blood sisters who tell each other everything, and it’s sacred between us.”

She still did not look entirely convinced, so I tried again. “I only told you my father’s secret because you asked for an example, and that was the only one I could tell. All the other secrets people have told me will go with me to my grave.”

Her face relaxed. “You really are a little soldier, aren’t you?”

“If you mean I can be trusted, yes.” I was proud that she’d entrusted me with a confidence so radical and dangerous.

“So you will help me save my marriage with Rupert as well as with Hugo? You did so well with Hugo.” She looked happy for the first time that day.

Unwilling to disappoint her when it was apparent her happiness now depended on me, I said yes. I had been willing to help her save her marriage with Hugo, and so far I had succeeded. Now she was asking me to help her save both her marriages, to keep her suspended on her trapeze, to partake in her daring feat. I would be the person on the ground, holding her safety line, ever vigilant to keep her from falling. I would have the close-up view of her trapeze, how she worked the pulleys and leapt from husband to husband, both of them reaching for her as she spun in glorious, airborne freedom. There wasn’t anything as amazing—not on Peyton Place, or The Addams Family, or Bewitched. Her life had elements of all those TV shows, and it was dangerous and thrilling, but it was real. And I’d been cast in an essential role.

“Before Rupert gets home from teaching,” she charged on, “we should talk about how you might keep an eye on him while I’m gone.”

“Keep an eye on Rupert? What would that entail?”

“For instance, if Rupert gets suspicious about me in New York, you should phone me, and, well . . .” Her hands waved and seemed to reach for something that wasn’t there. She averted her eyes when she said, “I wish I didn’t have to mention this. It’s so unfair. Ever since I fell in love with Rupert I have been absolutely faithful to him.”

“Well, yes, but I was already married to Hugo. That’s different. I’ve been completely faithful to both of them, but I can’t trust either of them when I’m out of town.”

I might have pointed out a fault in her reasoning, but as I understood our relationship, she was the mentor and I the apprentice, so it wasn’t my place.

Instead I said, “What am I supposed to do, track Rupert like a detective?”

A mischievous smile brightened her face. “Not a detective, a spy. A Spy in the House of Love.”

From Apprenticed to Venus: My Secret Life with Anaïs Nin. Used with permission of Arcade Publishing, an imprint of Skyhorse Publishing, Inc. Copyright © 2017 by Tristine Rainer.

Looking at the Other in the Midst of War 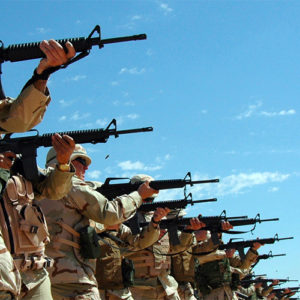 Looking at the Other in the Midst of War Two students were in the classroom when I arrived early to rearrange the chairs, from rows to a semicircle, so we could have...
© LitHub
Back to top