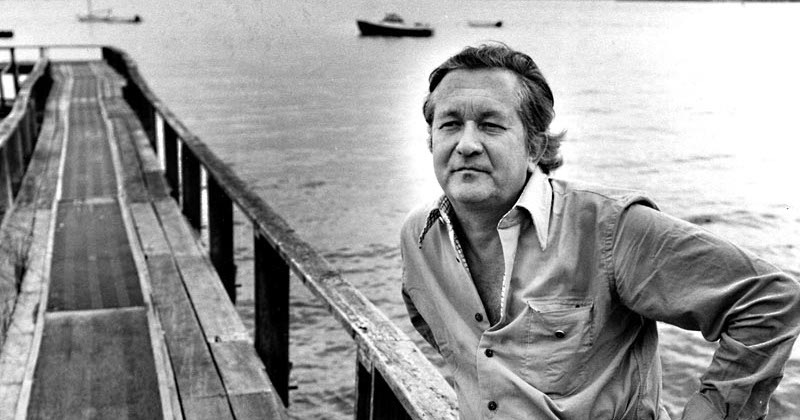 Apparently, William Styron was fired from his first job in publishing for being a total slob.

Pulitzer Prize-winning authors—they’re just like us! William Styron (Lie Down in Darkness; Sophie’s Choice; The Confessions of Nat Turner), who was born today in 1925 in Newport News, Virginia, wasn’t always a divisive yet critically acclaimed literary luminary.

After graduating from Duke University in 1946, Styron enlisted in the Marines and became a first lieutenant during World War II. Following his exit from the service, the future author moved to New York City and got a job at education publisher McGraw-Hill, where he read through the slush pile. Additionally, he enrolled in creative writing classes at the New School for Social Research.

Unfortunately, his time at McGraw-Hill didn’t last that long. The publisher fired Styron for “slovenly appearance, not wearing a hat, and reading the New York Post.” (LOL)

Somehow, I don’t think this bothered Styron that much. He published Lie Down in Darkness at the age of 26 in 1951, a novel that effectively launched his storied writing career. His debut was rewarded with the American Academy’s Prix de Rome. (Notably, financial help provided by Styron’s family allowed him to fully pursue his first novel and avoid the necessity of taking several minimum-wage jobs to survive and unpaid internships for “exposure.” Whoever said money can’t buy you happiness clearly has never been poor. But I digress!)

On the brink of the publication of Lie Down in Darkness, Styron was recalled to the Marines. His sophomore effort, The Long March, pulled from his experiences at Camp Lejeune in Jacksonville, North Carolina. In 1960, he published Set This House on Fire. The Confessions of Nat Turner was published in 1967, which drew considerable criticism for his portrayal of the historical figure. Sophie’s Choice hit shelves in 1979 and was adapted into a movie, which starred Meryl Streep acting at her most Meryl Streepness. His 1990 memoir, Darkness Visible, provided a frank examination of depression.

In 2006, Styron died at the age of 81. And as for that McGraw-Hill termination? Don’t think he harbored any hard feelings. Stingo, the narrator in Sophie’s Choice, who also works at a publishing house and gets fired, notes: “If McGraw-Hill had paid me more than 90 cents an hour, I might have been more sensitive to the nexus between good books and filthy lucre.” What a burn!