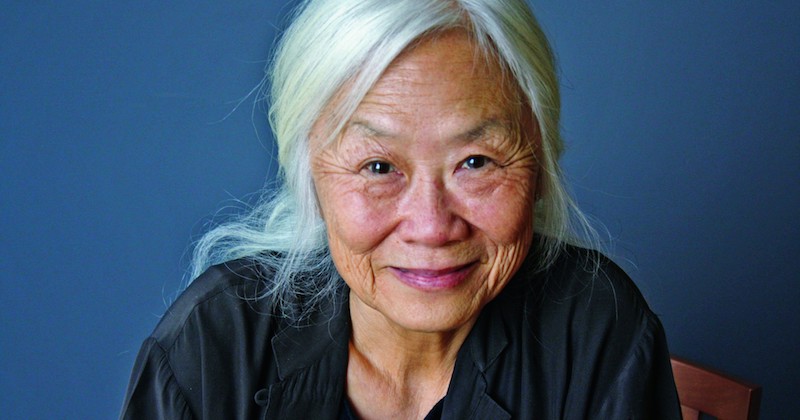 On this day in 1940, Maxine Hong Kingston was born in Stockton, CA. Kingston, the daughter of Chinese immigrants, took the literary world by storm with her seminal work The Woman Warrior (1976), which blends autobiography and mythology. The Woman Warrior, the winner of the 1976 National Book Award for nonfiction, was an unprecedented look at Chinese American identity that incited a polarizing response. “For those who understood where Kingston was coming from, it was encouragement that they could tell stories, too,” Hua Hsu wrote in a 2020 article for the New Yorker. Hsu added, “For those who didn’t, The Woman Warrior became the definitive telling of the Asian immigrant experience, at a time when there weren’t many to choose from.”

Kingston’s seventh book, I Love a Broad Margin to My Life (2011), was inspired by the poetry of Walt Whitman. The decision to write the book in verse was a deliberate way to concentrate on the art of creation. Speaking to the Guardian in 2011, Kingston said, “Because poetry is condensed I don’t have to make my way right over to the right margin, I don’t have to leap around in time and space, and I can say a lot with fewer words if I can just find the right words.”

In 1997, Kingston was awarded the National Endowment for the Humanities National Humanities Medal. Her other accolades include the National Medal of Arts (presented by former President Barack Obama), the American Academy of Arts and Letters Award in Literature, the National Book Foundation’s Lifetime Achievement Award, and the title Living Treasure of Hawaii. She taught at the University of Hawaii until 1976 and later, taught at her alma mater, the University of California, Berkeley. She is currently Professor Emerita at UC Berkeley. In 1991, she also founded a writing group for veterans; the idea came to her after experiencing tremendous personal loss.

Kingston’s literary career is a testament to honoring one’s truth. Below are some useful words of wisdom from the author about writing.

On writing biography: “I’m not an important person; I’m just anybody. And anybody’s life, a nobody’s life, could be a wonderful piece of art. I also feel that I changed the writing of biography because China Men (1980) and The Women Warrior are stories about my mother and father and again, I felt that to write truly about somebody you have to know what they were dreaming about, and a dream is fiction.”

On the burden of representation: “The idea that we can only say nice things about our ethnic group, I think that’s superficial writing, and so I feel that I already honor them by writing tragedy—and tragedy has its own way of uplifting people.”

On art as creation and the obligations of the writer: “I think that by ‘uplifting,’ I mean that art is a miraculous creation: that we can take terrible consequences in life and understand it and make art of it. That’s a necessary thing for a writer to do.”

On finding one’s voice: “I think for everybody that just being able to speak up is a bravery, which they have to learn. But for a writer, it’s to be able to find a style and a rhythm and a structure to be able to tell a story. I think that is another way of finding voice, and it’s not that easy. When I teach writing, I have people write a lot. I tell them: they can get an A if they write 50 pages and I’m not going to grade on quality because if you just write a lot then something will happen, the voice will start to flow, it will fall into place, it will find its own rhythm.”

On the power of writing as a nonviolent catalyst for change: “Writing is an act of nonviolence, but it’s very active, very aggressive, but you’re not setting off bombs or guns. Just using the pen. It’s like shouting and getting your voice heard and the range is worldwide. You might not be able to stop a war right now, but the words can go out and influence the atmosphere and the world, way into the future.”

On the labor of writing: “Writing is a very painful act. I try to start writing in the mornings, but I fool around and put it off to wash dishes or sharpen my pencils. I’m pretty regular on writing every day, but sometimes I start late and end up finishing in the afternoons.”

On the desire and drive to write: “You . . . have to know what you want, you have to know yourself well enough to know how you work best.”

On the drafting process: “I think that the various drafts are like building a tower. When you get to the top you can see visions, and you can further, and you can see higher. Sometimes it’s not till I get to the galleys that I can really see up there. I don’t mean to rewrite; it’s just that, as I’m reading it, I see what I ought to do.”

On rejecting perfectionism: “I’ve had time to think about it, criticize it and be disappointed in it. So, the way to make corrections is to write the next story.”

On writing from different POVs: “A writer has to break out of solipsism and narcissism and see from one gender to another, one race to another, one generation to another, from one self to any other human being. And even if I project myself into one other woman, that is already a great feat. If it is possible that I can understand one human being, then it is an artistic miracle.”