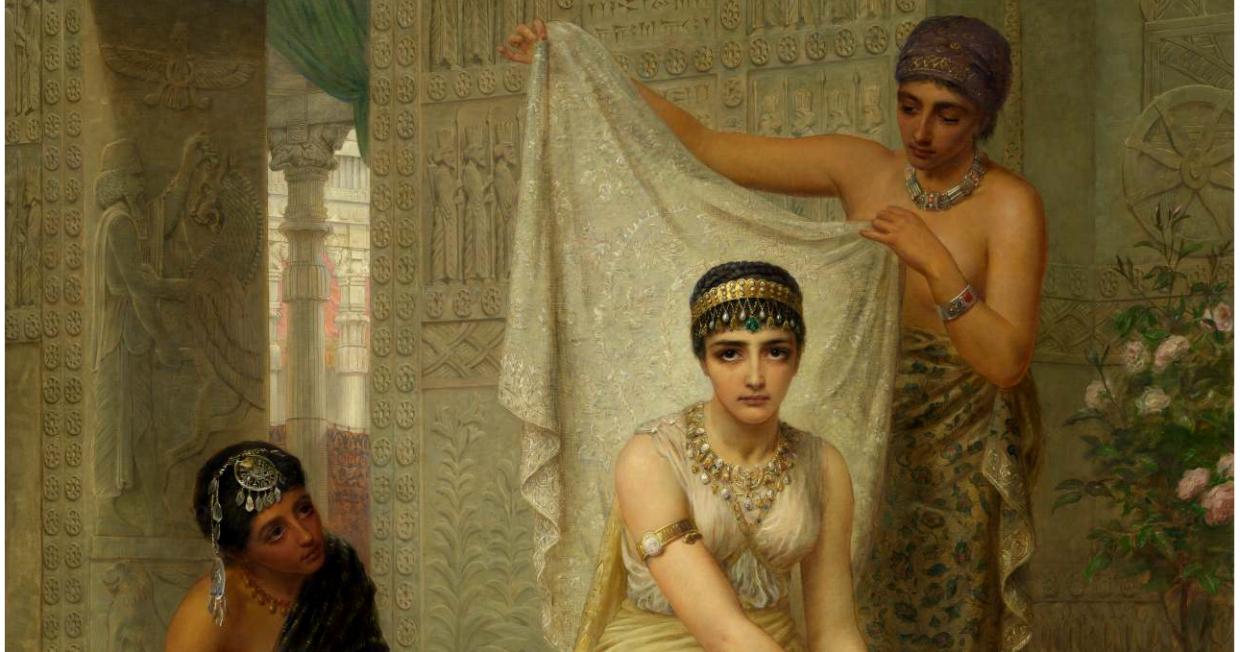 The Author of The Book of V. on Politics, Playfulness,
and the Secret History of Queen Vashti

As novelist Anna Solomon walks toward the beach, she spots her dad heading in the opposite direction. “Can I call you back?” she asks. “I have to say hello—from a safe distance.”

I’m in my windowless writing studio in Brooklyn, while Anna hikes the shore of Cape Ann, Massachusetts, where she grew up and is now weathering the pandemic. She’ll be there when her latest novel, her third, The Book of V., comes out, though she’s not sure yet how to mark the occasion or even what to expect life will be like. “It seems every week the world is totally changed again.”

Her words have a Biblical ring, which is fitting—The Book of V. was inspired by The Book of Esther, as well as Michael Cunningham’s novel The Hours. Like Cunningham’s book, Solomon structures the narrative as an interwoven, time-hopping triptych. “I was not interested in setting a book entirely in ancient times,” she tells me. “I wanted to transpose the Biblical story into a contemporary setting.” Chapter by chapter, Solomon’s novel bounces between Esther, an impoverished Jewish girl turned queen in Ancient Persia; Vivian Barr, the wife of a Senator in Watergate-era Washington DC; and Lily, an aspiring writer, second wife, and mother of two in Brooklyn during the weeks preceding the 2016 election. But the project originated with Esther, or, more precisely, Esther’s predecessor, Vashti.

“The Book of Esther is a weird book for the Bible,” Solomon says. “Very bawdy, full of drunkenness and lasciviousness. It’s really a burlesque, and may have been written to justify the holiday of Purim, which is a carnival holiday, a time for people to let loose and turn everything on its head. There’s a commandment that all the adults have to get drunk at Purim, so they’re not able to tell the difference between the hero and the villain.”

As a child, Solomon attended Purim celebrations with her family, part of which included a dramatic performance of Esther’s story. It begins when Queen Vashti—typically depicted as indecent and provocative—refuses to appear naked before her husband, King Ahasuerus, and his court. Infuriated by her disobedience, the king banishes Vashti. Then he calls for the virgins of the land to parade before him, displaying their beauty so he may choose a new, more subservient queen. Enter Esther, a young woman from the oppressed tribe of Jews living in Persia. She becomes the king’s second wife, gains his favor, and eventually reverses her people’s fortune, earning Jews permission to fight back against their persecutors.

“A character might be humming in the end of one chapter, and then, in the beginning of the next, a different character is also humming.”

“Vashti was always a bewildering character to me,” Solomon says. “I was never clear on why it was bad that Vashti didn’t want to appear naked in front of her husband and his friends, or why she just disappears from the story. And an even bigger question for me as a child was, ‘Why is nobody talking about how strange this story is?’ That’s stuck with me.”

As Solomon writes in an essay on Tablet, traditional rabbinical interpretations see Vashti as anti-Semitic, wanton, vain, or possibly afflicted with a disfiguring illness like leprosy. But to early American feminists like Elizabeth Cady Stanton, Vashti was an icon, a woman who asserted her agency against the most powerful man in the kingdom.

Writing into that radical tradition and imagining Vashti’s secret history is at the heart of The Book of V.

At this point we pause so Solomon can snap a picture of a red winged blackbird on a cattail. I’m still just looking at my yellow wall. My hope had been to meet her at the Brooklyn Museum of Art, not far from each of our apartments, to browse their collection of Persian antiquities. For a moment we mourn the pre-pandemic ease of just meeting for a walk, particularly at the BMA.

“The collection in the Brooklyn Museum was formative for me,” she tells me. “There was an exhibit of Egyptian artifacts that showed how the Egyptians may have believed that men become women in the afterlife, in order to give birth to themselves. One of the characters in the King of Persia’s harem believes that, based on that exhibit.”

In many ways, people living now cannot access the mind of someone from 400 BCE, but artifacts in a museum may present suggestions. “They open things up for you.”

Solomon, whose previous novels were entirely set in the past, does a lot of research, but always in tandem with writing. “The story needs to inform the research as much as the other way around.” She tries to avoid a trap she sometimes sees new writers of historical fiction falling into, of including a fact she finds fascinating but which has no place in the story, or doesn’t ring true to the character.

Learning about the history of Purim as carnival holiday, and the beliefs of the Egyptians, among other aspects of ancient life, all fed a less academic impulse: that of play. “This book was so much fun to write,” she tells me. “There’s more humor. It’s not like anything I’ve ever done before.”

There’s also magic, which enters the story as soon as Esther walks onto the page, in a camp of Jews on the outskirts of the Persian capital of Susa. Solomon says she’s not the kind of writer who often feels like her characters surprise her when they speak to her, but in this case, “It was instinctual. The magical elements pulled me to them, rather than the other way round.”

They began with the inclusion of a goblin in the camp, which was nothing she had planned. “Part of my brain said, ‘You can’t have a goblin in that chapter; they’re not real!’ But then I thought, let’s see what happens if I just keep this in. Then I got really into it.”

The more research Solomon did, the more she learned how little is actually known about The Book of Esther, or life in Ancient Persia in general, whether that be for the Persians, Babylonians, Jews, or women. “The Book of Esther is clearly a work of fiction. So I felt empowered to make things up too, and including magic makes that clear to the reader—this is not meant to be read as a history.”

“A lot of people, myself included, believed that Hilary Clinton would win the presidency and men would feel chastened.”

The supernatural element adds a richness to the text, a counterpoint to the domestic scenes set in more familiar times. The Book of V. is historic and contemporary, realistic and fantastical, strange and familiar, all at once. Like at Purim, lines are blurred—in this case between genre—and the book feels like a spiritual sister of the Hebrew Bible (the Tanakh), which includes factual accounts but also parables, angels and demons, and miracles.

This playful energy extends to the non-magical parts of the book too. A third of the book follows Lily, a mother of two in her forties in Brooklyn, the closest Solomon has ever written a character to herself, which she found difficult but also fun. Lily becomes a means for the author to cast a sometimes sarcastic eye at the world she herself lives in, “where women have play dates with wine, and judge and categorize one another.”

Solomon is curious about these categories, which women are trained to recognize from a very young age. “’What type of women are you?’ is a question that runs throughout the book,” Solomon tells me. “But what if the type of woman you imagine yourself becoming does not exist?”

If there is a thesis to The Book of V., Solomon says, it’s that. “Are you going to be the harlot Vashti or the virtuous Esther? But maybe Esther has parts of herself that are wanton, and maybe Vashti is not who everyone thinks she is. None of us are, either to the outside world or, sometimes, ourselves.”

Solomon wrote The Book of V. linearly, braiding the stories as she went. This presented a challenge that, at first, seemed architectural, and which she tracked in color-coded note cards. But in the end, she wrote more intuitively, by ear.

In her twenties, Solomon worked as a radio journalist. At the turn of the millennium, she traveled around the country interviewing centenarians. “I had hours and hours of tape,” she says. “And no idea what the structure of the piece would look like.” While struggling to figure it out, she accidentally hit play on all the tracks simultaneously. “Every voice spoke at once, but then someone would pause, and you’d hear one person clearly, and then someone else, and the whole structure just came into my ear: I would move between voices, weaving them together.”

She feels that same impulse at work in The Book of V.. “There’s this instinctual rhythm I wanted. I think very much in beats on the sentence level, and that extends to the chapter, and even the parts of the book. It’s very musical.”

Sometimes literally. “A character might be humming in the end of one chapter, and then, in the beginning of the next, a different character is also humming.” Soon, she was tracking these elements as well, mapping how gestures and activities—like sewing, or drinking (as in the Biblical story, there’s a lot of alcohol)—reappear throughout the book.

At this point in our conversation, the crashing of waves underscores Solomon’s words. She’s arrived at the ocean, which she says, on this chilly early spring day, is raw, powerful, and beautiful. I ask what it’s like to have worked so hard on this book and to have it release now, at a time when so many are scared, suffering, and not able to focus on much else besides the news.

“I know that a book has a long life,” she says. “And I think we all need to keep telling and reading stories, for escape and comfort, but also because they have real use right now. There’s a reason the Italians started singing from their balconies while on quarantine. It’s important to people’s survival to have art.”

In particular art that, for all its inventiveness, is explicitly political and feminist. Solomon began writing The Book of V. before 2016, but certain elements of the plot came into sharper focus for her during and after the election. In particular, she realized that she needed to set Lily’s story right before the election, because she wanted to capture a sense of naiveté about what was coming. “A lot of people, myself included, believed that Hilary Clinton would win the presidency and men would feel chastened.”

And her writing about the Watergate era became more pointed as well, in small touches that she hopes adds to the resonance of the book. “The situation that we’re in now, with this pandemic,” she tells me, “has been made so much worse by the president’s abuse of power. And so I hope the book provides readers both escape, and resonance.” 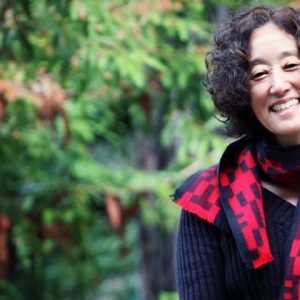