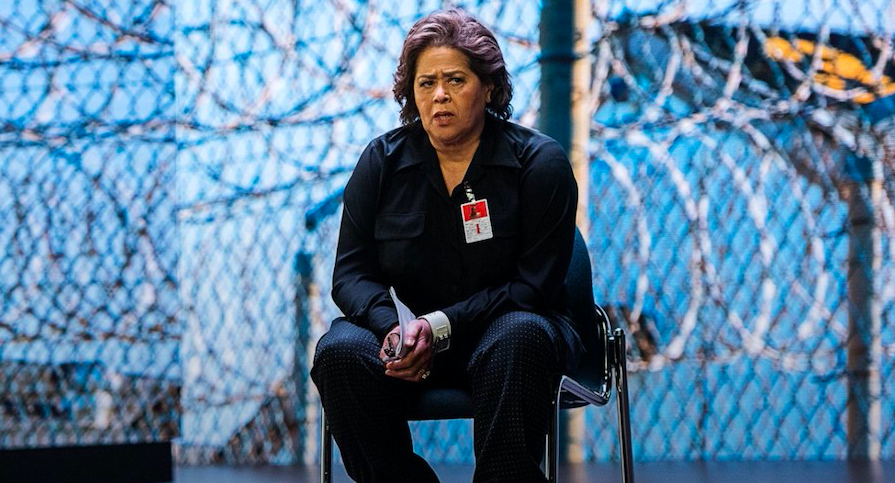 "It all starts with listening."

Notes from the Field is the most recent installment in what I consider my life’s work: a series of plays I call On the Road: A Search for American Character. Since the 1980s, I have periodically traveled around America, interviewing large numbers of people, collecting their words and performing them onstage, crafting them into multivoiced solo dramas that bear witness to particular historical moments. I’ve created about twenty of these pieces over the past four decades, including Fires in the Mirror (in response to the 1991 riots in Crown Heights, Brooklyn) and Twilight: Los Angeles, 1992 (about the riots). Notes from the Field, my latest effort, concerns what has come to be known among social scientists, educators, jurists, politicians, and activists as “the school-to-prison pipeline.”

I view my plays as documentations of moments in history. Central to my creative process is active listening. My goal is to pay careful attention to the people I interview and then to reflect back what I have heard in the hope of sparking a conversation, of making change possible. I aim not to merely imitate but to study people closely enough so that I can embody them on the stage, using my own voice and body. When I was a girl, my grandfather told me, “If you say a word often enough, it becomes you.” People speak of putting themselves into other people’s shoes. My way of doing that is to put myself into other people’s words.

It all starts with listening.

My process in creating Notes from the Field was the same one that I have used across my career. I interviewed about 250 people for this play, in four different geographic regions: Maryland, South Carolina, Northern California, and Pennsylvania. From out of the wealth of interview material that I amassed using the rehearsal processes for five different productions and some staged readings, I chose 19 people to perform. The voices I selected reflect the variety of people caught up in the school-to-prison pipeline: students, parents, counselors, administrators, prisoners, preachers, politicians. Among them are Sherrilyn Ifill, president of the NAACP Legal Defense and Educational Fund; Reverend Jamal Harrison Bryant, who spoke at the funeral of Freddie Gray; Bree Newsome, a young activist arrested for removing the Confederate flag from the South Carolina State House; and Niya Kenny, a high school student who was arrested for protesting the violent treatment of a classmate by a school police officer. I end the play with Congressman John Lewis because he personifies both a violent moment in American history—the civil rights movement—and the promise of what American character is all about.

While the script of Notes from the Field was still a work in progress, I performed it in workshops around the country. I tried out different versions in different places, engaging local communities in a series of exchanges that helped to shape the piece.

The project really started as a social justice project. Each night in Berkeley, California, at Berkeley Repertory Theatre, and subsequently at the American Repertory Theater housed at Harvard University in Cambridge, Massachusetts, I literally stopped the show in the middle and told the audience they were “the second act” of the play. It was an enormous undertaking. We trained facilitators and divided audiences of 500 people into groups of 20. We then sent them around the theater, into spaces that they would normally not inhabit—paint shops and the artistic director’s office—and spaces they do inhabit, like lobbies, front lawns, and bar-restaurant areas. I was trying to use the convening power of the theater to get strangers talking to one another about education, about race relations, about inequality, about violence, about what they as individuals could do. We asked people to say how proximate they were to the problem.

My goal in all of this? To inspire action.

Nonprofit and for-profit US theater audiences are composed, for the most part, of middle-aged and middle-and upper-middle-class individuals subscribers. At the same time, we were able to gather audiences of people from various communities at the American Repertory Theater, thanks in part to the support of Harvard’s then president Drew Faust. One night the athletic teams came. Attendance was required for all freshmen.

Every night we performed at Berkeley and at the American Repertory Theater, we chose a person from the community—a restauranteur, a police officer, a student, an ex-offender, a religious leader—to welcome the audience and to say why they had come. This, to me, exemplifies what artistic institutions can be in their communities—places where a radical welcome is extended, where a radical hospitality is offered. We need spaces to bring us out into civic space, beyond our comfort zones, out from behind our metaphoric gates and picket fences, away for a moment from the TV, laptop, and smartphone screens that project back to us what we choose to see and hear.

My goal in all of this? To inspire action. To suggest to the youngest person in the crowd that they have agency. And we recently saw evidence of this. We saw in the US a movement among high school students sparked by the shooting at Stoneman Douglas High School in Parkland, Florida. One scholar of American education, Pedro Noguera, whom I at one time portrayed in Notes from the Field, predicted when I interviewed him in 2015 that activism would be more likely to happen in high school than in colleges due to the cost of attaining a college education and the pressures on college students.

In its final theatrical form, Notes from the Field was staged off Broadway in New York City in 2016. It was subsequently adapted into a feature film by HBO that released in 2018. The text of this book combines the scripts of two of the stage productions while also bringing in elements from the HBO film.

It is my hope that the film can reach a wider audience—including young people, teachers, police officers, and others who don’t typically go to the theater—and that it can usefully contribute to an ongoing debate. Since I first began working on this project, the issues have taken on an even greater urgency.

I vividly remember the exact moment that led me to this subject. It was an incident that occurred while I was filming the television series Nurse Jackie. I was in hair and makeup next to a castmate, British actress Eve Best, and I told her I couldn’t get out of my mind a news story I had just heard: that a kid in Baltimore, my hometown, had peed in a water cooler at school and they were going to send him to jail. Eve responded, in her fabulous accent, “Oh, well, whatever happened to mischief?”

That was when it struck me: rich kids get mischief, poor kids get pathologized and incarcerated. Data released by the US Department of Justice during the Obama administration revealed the overuse of expulsions and suspensions to discipline kids who live in poverty. Black, brown, Native American, and poor white children not only get suspended and expelled more often than middle-class or rich kids; they are also disciplined more harshly from kindergarten onward, and the police are called in more frequently. Incredibly, even five-year-olds have been handcuffed for having tantrums in school.

In the summer of 2018, I performed Notes from the Field at the Royal Court Theatre in London. There I learned that this is not only a US problem. Students in London are using what is called subvertising—that is, sending political messages in forms that resemble ads from well-known brands, such as posters in the London Underground—to bring attention to the issue there. The ads ask for more financial support and more compassionate disciplinary practices. As in the US, a study at the University of Edinburgh revealed that, in the UK, students excluded from school by age twelve are four times more likely to be incarcerated as adults.

We are failing to meet the needs of our most vulnerable and troubled children. And this is a choice. Our policy choices as a society and our decisions about where to allocate resources—pouring them into prisons rather than into mental health or education—have turned our schools into a road to incarceration for too many of our youth. Because this is not only an American issue, we have an opportunity to invite new ideas, new ways of thinking about the disenfranchised.

In some ways, the current political climate is discouraging, but in other ways, I see room for hope. There is certainly a greater awareness now of these social injustices—and of the ability of ordinary people to do something about them. Some of the individuals represented in this play stand as an inspiring testament to that hope.

This is a time for people to cease being spectators and to instead be moved to get out there and do something to effect change. It is time to ask ourselves, “Who are we? What do we believe in? What kind of country do we want to be?”

I believe that art can inspire action. It can motivate us to reimagine a world where schools are more than sorting mechanisms for the haves and the have-nots, where they can function as centers for a culture of learning in which teachers, staff, administrators, parents, and students from all communities are respected and nurtured intellectually, physically, and creatively.

But that is a type of reimagining that needs to include all kinds of voices, especially those that have been historically discounted. It is a reimagining that requires courage, empathy, and action. And it has to start with listening. 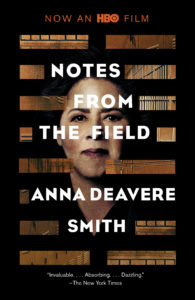 From NOTES FROM THE FIELD by Anna Deavere Smith. Copyright © 2019 by Pearl B. Young, Inc. Reprinted by permission of Anchor Books, an imprint of the Knopf Doubleday Publishing Group, a division of Penguin Random House LLC.

Anna Deavere Smith is an actress, teacher, playwright, and the creator of the acclaimed On the Road series of one-woman plays, which are based on her interviews with diverse voices from communities in crisis. A recipient of the National Humanities Medal from President Obama and two Obie Awards, her work also been nominated for a Pulitzer and two Tonys. Onscreen, she has appeared in many films and television shows, including Philadelphia, The West Wing, Black-ish, and Nurse Jackie. She is University Professor in the department of Art & Public Policy at NYU, where she also directs the Institute on the Arts and Civic Dialogue. In 2019, she was elected to the American Academy of Arts and Sciences. Her new book, Notes From the Field is out May 2019 from Anchor Books.

How Do We Reverse the Tide of an Anti-Science America? 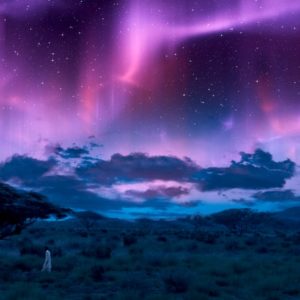 "There is no magic." This statement, perhaps most famously attributed to Harry Potter’s uncle Vernon Dursley, is also...
© LitHub
Back to top
Loading Comments...